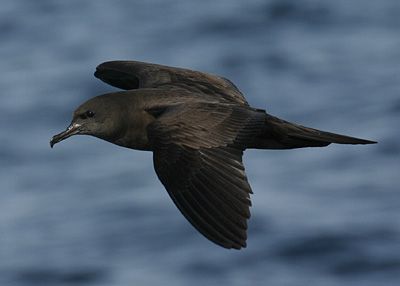 There are two colour morphs of the species, dark and pale. The pale morph has a grey-brown back, head and upperwing, and whiter plumage below. The darker morph is the same dark grey-brown over the whole body. They have a large wedge-shaped tail, dark bill and flesh coloured legs. Both morphs exist in all populations, and bear no relation to sex or breeding condition. This and other species of Shearwater are also known collectively as Muttonbirds, due to the practice of harvesting the chicks for meat and oil in Australia and New Zealand.

The Pink-footed Shearwater has brighter pink legs, and most diagnostically, a light bill. The Wedge-tailed has a dark bill. Buller's Shearwater is closely related and has a wedgetail and thin black bill, but shows striking black and white diagonal wing bars in flight.

Widespread over open ocean throughout the tropical Pacific roughly between latitudes 35°N and 35°S, and off such islands Japan, the Hawaiian Islands, the Seychelles and Western Australia. The pale morph predominates in the north Pacific, the dark morph elsewhere.

This species is monotypic.[1]
Formerly placed in genus Puffinus.

Search for photos of Wedge-tailed Shearwater in the BirdForum Gallery