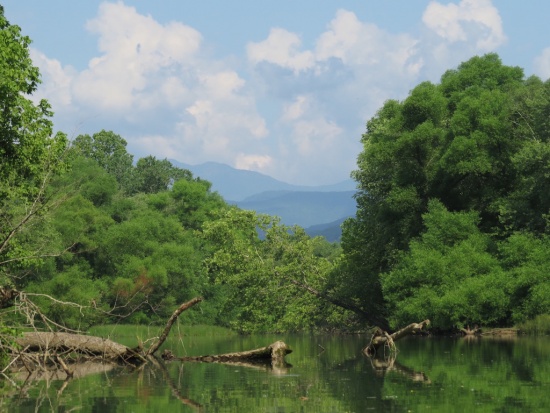 Western North Carolina (WNC) is an area of diverse examples of nature, geography, and habitat.

It begins in an area of gentler, rolling hills around Wilkes, Burke, and Rutherford counties and extends westward to the Tennessee-North Carolina border areas in the midst of the peaks, and vistas, of the Great Smoky Mountains and Appalachian Mountain Ranges.

It’s a region of gently meandering streams and rivers on the one hand while having within it’s bounds, world-class white-water in the Nantahala area.

It’s birds as small as a sparrow and as majestic as a Bald Eagle.

It’s flora and fauna from one end of the spectrum of nature to the other.

It is as author Christian Reid said, in the title of the 1876 book, The Land of the Sky.[1] A nickname that is frequently used to refer to the far western portion of Western North Carolina to this day.

The term “notable, when it comes to describing species of birds, as it applies to Western North Carolina, is a term as widely interpreted as the landscape and people of the region. It is definitely worth noting the venerable Bald Eagle has been reported to some amount in all counties in this part of the state. 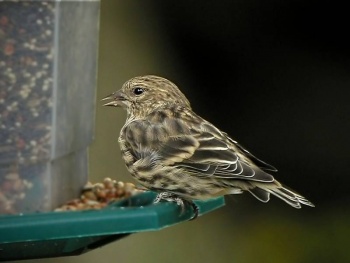 Wildlife in Western North Carolina is as widely varied as the state is long from east to west. There are too many species to list. But, some you stand a good chance of seeing, depending on the habitat, and location, you are in could include Black Bear, Elk, Deer, Bobcat, Fox, Raccoon, and other mammals. Plus amphibians and reptiles.

To speak about history when it comes to Western North Carolina, someone might have to revert to an old, often used, cliché of - It has always been there. An oversimplification of a much more complex answer, I suppose. But that statement has held true from the time before settlement by English speaking people when its inhabitants were the indigenous people. It was true when the infamous Trail of Tears connected to the removal, from the area, of certain of the Cherokee people, took place. It was true when it was still considered wilderness and explored by adventure seekers. It was true when people settled in the hills and coves of the mountains. It’s true today in the remembrance and renewal of certain of the old ways and practices that are still taught in the folk schools of the area. It is true that it has always been there.

When it comes to matters of travel and tourism, be that for birding, business, or some other type of get-away, there exists no greater resource than the North Carolina Travel and Tourism people through their official website, Visit NC[1]. It will be a mix of all things travel and tourism-related be they free to the public, or otherwise. They also have "a ton" of information to include free maps and brochures they will send to you to help you plan your trip.

It’s a trail conceived in 1921 and completed in 1937covering over 2100 miles through 14 states. It travels between Mount Katahdin in Maine and Springer Mountain in Georgia with approximately 95 miles of it in North Carolina.

The Blue Ridge Parkway is one of the best ways to traverse a good portion of Western North Carolina. And in doing so you will also find a first-class collection of wonderful sites for birding and all manner of ways to enjoy nature. It’s more than A site, but an assembly of sites stretching for 469 miles, covering parts of 2 states with more sites, trails, waterfalls, etc. than you can imagine. You owe it to yourself to take a long, hard look at this one! 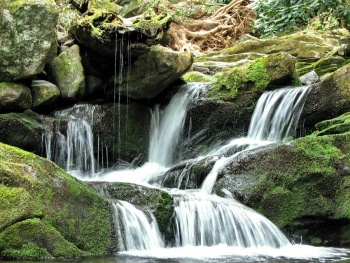 If, while in North Carolina, birding and enjoyment of nature sound attractive to you, then you owe it to yourself to definitely make a visit to the[Map 3] Great Smoky Mountains National Park (GSMNP)[4] while you’re there. It’s iconic when thinking about the mountains of North Carolina.

According to the Park’s Statistics[5], the GSMNP is the busiest National Park among the whole National Park system with more than 11.3 million visits in 2016. It covers 522, 427 acres divided between the states of North Carolina and Tennessee.

And if the GSMNP is an icon of the region’s mountains, then the Black Bear is an icon of the Park itself. As a general rule though, they pose no significant threat to park visitors, as long as they are respected and the rules governing contact with them are followed. They are but one part of a park rich with a significant variety of wildlife.

While statistics regarding birds, species-specific to the park itself, are not readily at hand, rest assured there is a wealth of species to be found in the area, and by extension, the park as well.

Opportunities to find those birds are frequent and widespread when the GSNMP’s large number of trails, amenities, and overall natural nature is taken into consideration.

For more general, and specific, information check the park's website[4]. 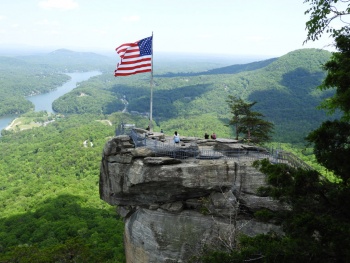 Chimney Rock is one of those places that people always considered as their destination when they “went to the mountains” in Western North Carolina. It was, and still is, that kind of place. It is now known as[Map 1] Chimney Rock State Park[2] having achieved that status in 2007. However, access to the “Chimney” portion still has an admission charge. Parts of the park are free while others will require paying an admission. For instance, of the 10 trails present in the park, 6 are in the admission portion while 4 are in the free portion. There are still opportunities for birding without paying, if you so wish. The free access is through the Rumbling Bald access, the Eagle Rock Reserved Parking Area, and in Chimney Rock Village. Consult the park website[2] for specific, up-to-date information on other activities and park information

Grandfather Mountain is another of the iconic spots when people think about going to the Western North Carolina mountains. It’s an easily recognizable view on the horizon when in the area. It always has offered many unique opportunities to enjoy nature and operated as a commercial entity until 2009 when the state purchased in excess of 2400 acres from the owners of Grandfather Mountain forming[Map 2] Grandfather Mountain State Park[3]. While an admission charge is still required for admittance to the upper portion of the mountain where the swinging bridge is located, there are many opportunities for enjoyment of nature, including birding, in the remaining portion. There are too many possibilities available to list here, so consult the park website[3] for additional, specific, and up-to-date park information.

Those wanting to fly into the area have commercial access at the Asheville Regional Airport (AVL) in the mid part of the region with both the Charlotte-Douglas International (CLT) and Greenville-Spartanburg International (GSP) airports within an easily driven distance.

The visitor can easily avail themselves of lodging and food with a wide range of choices, and prices, easily found by means of a nominal search.

Search for photos of Western North Carolina in the gallery