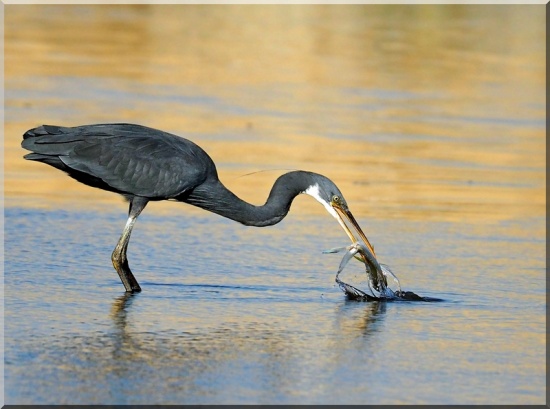 55–65 cm (21½-25½ in)
Two morphs, a white and a dark slaty.
The Western Reef Egret or Heron has a slightly longer beak and tarsus than the sometimes similar Little Egret, and has bright yellow feet, which helps distinguish it from some other dark herons. It also has a distinctive single, wispy plume erutping from the back of the head. 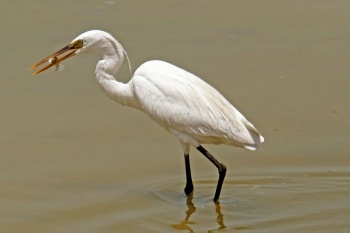 Dark morph predominates in the nominate race.
In race schistacea dark morph is more blue-grey and less numerous than white morph. In the populations closest to Europe (the population most likely to stray) the number of white morph bird is estimated at 1%. 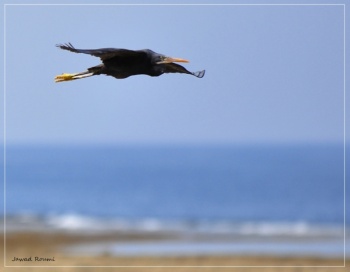 Breeds on the Banc D'Arguin and the coast of Mauritania south to Gabon and the Gulf of Guinea islands. In the east breeds on the coasts of the Red Sea and south to Mozambique, Madagascar and Aldabra. Also breeds on Socotra and coastally from the Arabian Peninsula to southern India and Sri Lanka including the Lakshadweep and Maldive Islands. Formerly bred in Kuwait, now regular passage and winter visitor. Mainly resident but with some post-breeding dispersal along coasts adjoining breeding areas.

Recorded as a vagrant about 40 times in France, mainly the far south and the Camargue in particular, about 50 times in Italy and there are around 20 records for Spain, mainly in the Ebro Delta. Also recorded in Portugal, the Azores and increasingly in the Cape Verde Islands, Morocco and Tunisia, and Bulgaria. Some records refer to long-staying, practically resident, individuals. Also occasionally recorded elsewhere in Europe, e.g- Germany, but these are usually regarded as escapes.

This species has started to occur in the western hemisphere. It is a very rare visitor to Barbados and the Atlantic coast of the United States and Canada (has occured in Newfoundland, Nova Scotia, Maine, New Hampshire, Massachusetts, New York, and New Jersey). All of these records (execpt possibly the Nantucket record in the 1983) may pertain to the same individual. The bird that appeared in July in the New York/ New Jersey region was noticed to be missing its right hallux, the toe that points backwards. The other birds photographed in North America aren't missing any digits, but the toe could have been lost in an accident prior to the birds New York area visit.

Sometimes considered a subspecies of the Little Egret, or, more commonly, include the Dimorphic Egret as a subspecies. 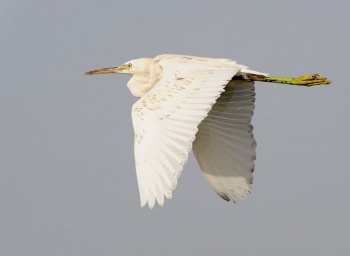 The diet consists of both aquatic and terrestrial insects such as locusts, crustaceans, and small fish. They also eat amphibians, molluscs, spiders, worms, reptiles and small birds.

They generally nest alone, though may be in small, loose colonies with others of the same species. They construct a stick nest, which may be laid in a bush, on a ledge, on a rock or in mangroves. They sometimes build a new nest on top of an old one.

Search for photos of Western Reef Heron in the gallery

Search for videos of Western Reef Heron on BirdForum TV