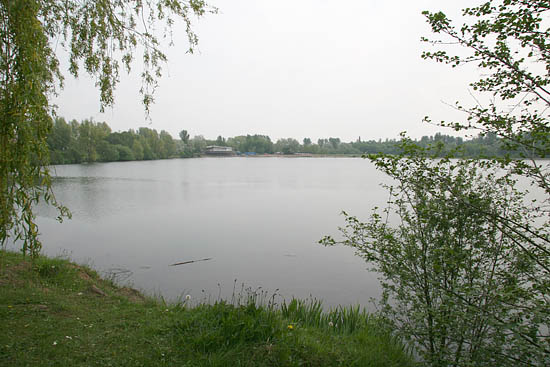 Measuring approximately 300 metres in diameter, Westport Lake is situated between Tunstall and Burslem in the north of the Potteries. For such an unpromising location it has a significant list of birds, including many regional rarities.

Please add the extras species previous contributors not seen and adjust the total:

Other Flora and Fauna

Westport Lake is noted among anglers for the size of the Pike. One observer noted one catch a House Martin as it skimmed the lake's surface!

Westport Lake was formed in the 1890s as a result of subsidence on and around the site of the former Port Vale Football Club practice ground. The lake covers some 10 hectares and is only 1m deep at the most. Underwater surveys show it to be uniformly shallow with a narrow shelf 0.6m deep around the margin. Being very shallow the lake can be quite turbulent and this restricts plant growth around the margins. The southern shore has a covering of sand which, in the days before the increase in visitors, attracted down passing waders. A smaller lake, situated to the south of the main lake, was built for model boat enthusiasts.

The lakes attract waterfowl, particularly Tufted Duck, Common Pochard, Mute Swan and Great Crested Grebe. Can be good for gulls too with 15 species recorded so far. There is a resident flock of feral waterfowl.

To the west is the nature study area. This area is rapidly growing up but essentially consists of four inter-connected pools fringed with Alders, Phragmites and Glyceria. It is a particularly good area for Eurasian Siskin, Redpolls and European Goldfinch. Reed Warbler and Sedge Warbler have bred.

In the autumn there is a moulting herd of Mute Swan but winter is the best time for waterfowl and also for flocks of Eurasian Siskin, Redpolls and European Goldfinch which can be found in the nature reserve area. This area is also proving attractive to rare warblers which have included Yellow-browed Warbler, Hume's Leaf Warbler and Siberian Chiffchaff.

Plenty of parking and a new visitor centre with toilets and cafe has been constructed. Paths are accessible to wheelchair users.

Please add if any reputable and non-commercial sites are known.

Other sites nearby are: