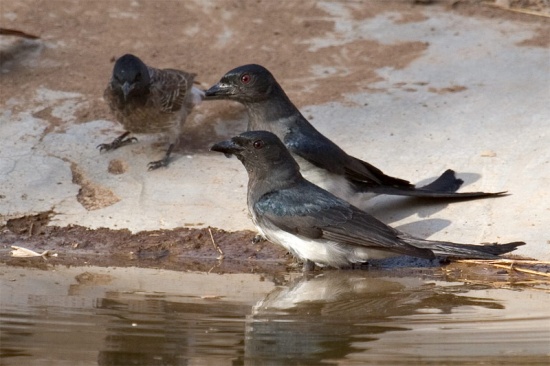 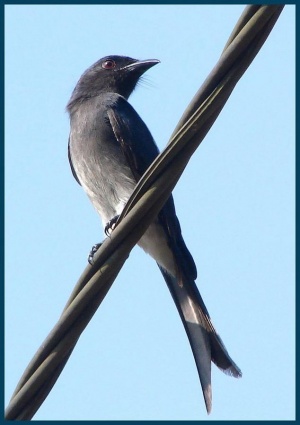 Sexes alike, females are slightly smaller. Juveniles are dark brown above, brown on throat and breast and have some white barring on breast.

Juveniles of Black Drongo, Ashy Drongo and Crow-billed Drongo may have considerable white on vent but these areas look scalier, not solid white.

Open forest and well-wooded habitats. Occurs up to 2000m in the Himalayas, up to 1500m in South India.

Feeds mostly on insects, takes sometimes small birds. Occasionally pirates food from other birds.
Perches upright on a branch or treetrop and flies out from there with agility, snapping up prey in bill or claws.

Breeding season March to June in most of its range, insularis breeds from February to June, leucopygialis from March to May. The nest is a large and bulky cup made of grass and twigs. It's placed 3 - 9m above the ground in a tree. Lays 2 - 3 eggs, 2 - 4 in Sri Lanka.

A resident species. In India some seasonal local and altitudinal movements, eg in Gujarat.

Search for photos of White-bellied Drongo in the BirdForum Gallery