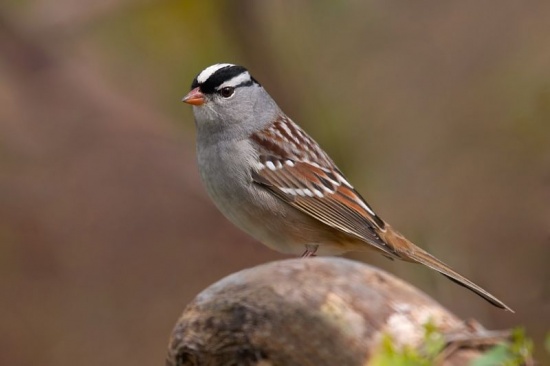 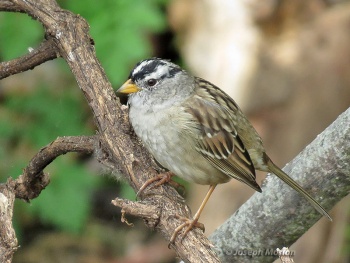 14–17 cm (5½-6¾ in)
Black and white stripes on their head, a grey face, brown streaked upper parts and a long tail. The wings are brown with white wing-bars and the underparts are grey. Their bill is pink or yellow. Details of the head pattern differ between subspecies; see Taxonomy section below. Immatures are similar to adult, but crown stripes are reddish-brown instead of black. Juveniles are heavily streaked below with brown head stripes.

Breeds from Alaska and western Canada east to Labrador and northern Quebec. In western North America breeds south to central California and the mountains of northern Arizona and New Mexico. Winters in the southern and central United States (on the Atlantic coast as far north as Pennsylvania and Long Island) and in northern Mexico. 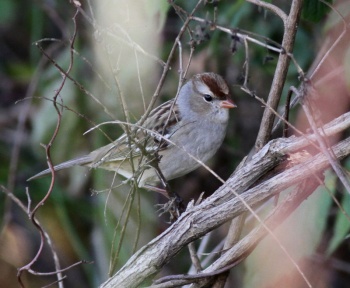 There are five recognized subspecies[1]:

The latter three subspecies, sometimes grouped for identification purposes as "Gambel's White-crown," are distinguished by their white lores and orange (gambelii) to yellow (nutalli/pugetensis) bill. Z. l. gambelli has gray fringes to the back feathers while nuttalli and pugetensis have tan back fringes. (Nominate and oriantha share black lores and pink bill.) 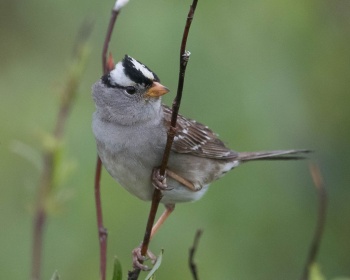 Winters in hedgerows and densely vegetated field edges, roadsides and streambanks, woodland and forest edges. In California it is an abundant nester in coastal scrub, but winters in a wide range of habitats, including dry deserts, as for instance in the Kelso Valley of Kern County.

They forage on the ground and in low vegetation, for beetles, bugs, seeds and plant material. They sometimes make short flights to catch flying insects.

Monogamous, occasionally polygynous (nuttalli). Nest built by female, is a cup of dry grasses, sticks, dead leaves or moss lined with finer grasses and hair. Nest in a low bush or on ground. Clutch of 3–7 pale greenish to bluish eggs marked with brownish to reddish spots. Brood parasitism by Brown-headed Cowbird (Molothrus ater) most frequent races oriantha and nuttalli.

Song variable, with many regional dialects, but distinctive. Usually starts with one to four clearly whistled notes, the second slightly lower, followed by three descending husky notes. Pacific coast birds usually start with a long, clear whistle that is higher-pitched than rest. Typical call a hard tsit, flatter in tone on Pacific coast.

Search for photos of White-crowned Sparrow in the gallery