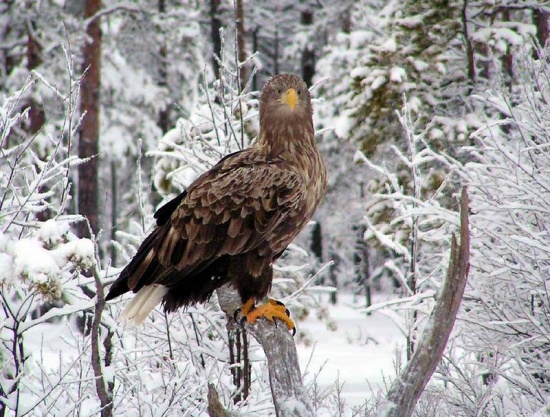 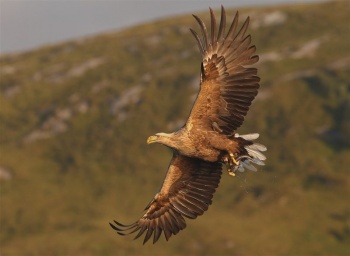 Length 74–92 cm (29-36¼ in); wingspan 193–244 cm (76-96 in); weight male 3.1-5.4 kg, female 3.7–6.9 kg.
Adult mainly brown with paler head and neck, brown flight feathers, paler upperwing coverts, white graduated tail, and yellow bill and legs.
Juveniles are much darker than adult, but can have some white spots on the middle coverts. The tail is a little longer than in the adult and less obviously graduated; the dark feathers have pale shafts, except in the central pair.
Immature: during the next several years of immature plumage, the feathers gradually are replaced with adult feathers, so that the tail for example becomes a mix of juvenile (dark) and adult (white) feathers.

Breeds in western Greenland and western Iceland, in coastal Norway north and discontinuously around the Baltic with small populations in Sweden, Finland, Estonia, Poland and Germany. In the east breeds from the Kola Peninsula discontinuously south to the Black Sea and east across Asia to Kamchatka and northern China. Recently bred in Denmark for the first time in many years and increasing there and in western Germany. Very small and scattered pockets of distribution in the Balkans and the Caucasus, possibly also Turkey. In the 1980s breeding occurred in Scotland for the first time since 1916 after a long-running reintroduction programme using birds from Norway. By 2000 there were eight successful nests out of a total of twenty pairs holding territories. 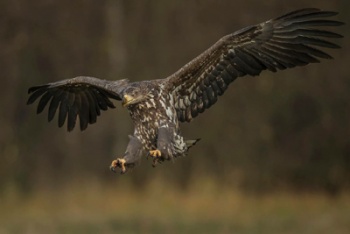 Vagrancy from Scandinavia to east and south-east England is on the increase and small numbers are now regularly wintering in north-east France, with frequent records from Belgium and the Netherlands. Vagrants have also occurred on Jan Mayen and the Faroe Islands, south to Portugal and the Canary Islands, North-West Africa and Egypt, Cyprus, Israel and Lebanon. In February 2002 one was present on Mallorca, the first record for the Balearics. In North America vagrants have been recorded on the north-east coast and in western Alaska and probably regular on Attu Island where it has bred. Birds from Varangerfjord eastwards and over much of Russia are migratory but most others resident or dispersive. In winter becomes more widespread around the southern Baltic coasts, at lakes in central Europe and around the Black Sea.

Sea-coasts and the shores of large lakes, rivers and extensive wetlands. In the extreme north of the range it is generally coastal, breeding on cliffs but elsewhere will breed in trees.

They build a large nest of sticks in a tree or on a coastal cliff. 1-3 eggs are laid 2-5 days apart in March or April and are incubated for 38 days by both parents. The female does most of the brooding and direct feeding. Young are able to feed themselves from 5-6 weeks and they fledge at 11-12 weeks, remaining in the vicinity of the nest, dependent on their parents for a further 6-10 weeks.

Search for photos of White-tailed Eagle in the BirdForum Gallery

Search for videos of White-tailed Eagle on BirdForum TV