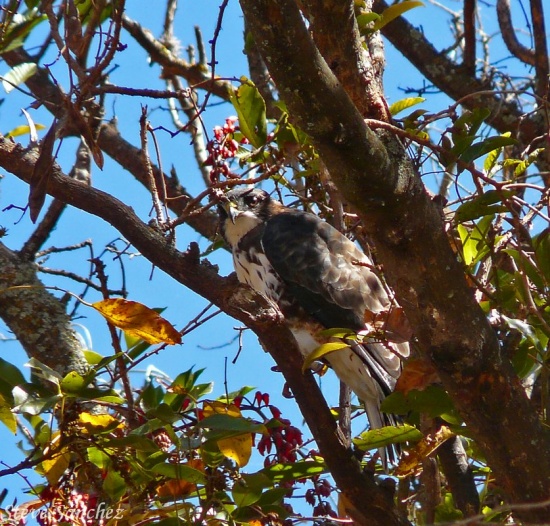 42-45cm
Adult: Brownish upperside including upperside of tail and neck, head, and crown. Throat is white, separated from the breast by incomplete brown collar. Underside is mostly white but with brownish markings on the flanks, and sometimes also on breast and belly. Pale underside of wings with dark comma but not patagial mark. Pale underside of tail with narrow darker bands, but not a broad terminal black band.
Juvenile similar but with more extensive streaks on underside, and often also a cinnamon wash; side of head streaked and not solid dark like adult.
In flight notice bulging secondaries; wings are held flat when soaring.

Birds seen from Peru north-wards are thought to be Austral migrants; completely leaves Chile in winter.

Forests, especially Notophagus (southern birch) in breeding season. From sea level to as far up as good forests occur.

Search for photos of White-throated Hawk in the gallery