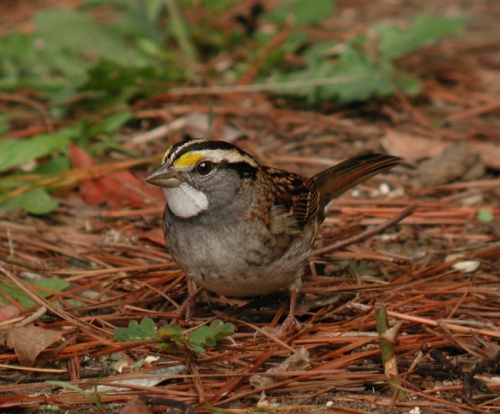 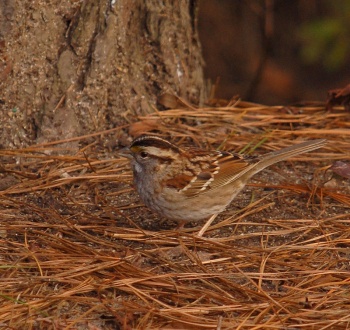 White-crowned Sparrow, which has a light gray throat, and a very broad white median crown stripe with a black border.

Breeds from northwest Canada east to Labrador and Newfoundland and south to Ohio, Pennsylvania and Maryland. Winters in the eastern USA from the Great Lakes south to Gulf Coast and Florida, and also in small numbers on the Pacific coast.

The most frequently seen Nearctic sparrow in the Western Palearctic, recorded in Iceland and the British Isles, the Netherlands, Denmark, Sweden, Finland, Spain and Gibraltar. The first for Norway was recorded in July 2002. British records (c.24) most often on Shetland and usually in May-June but also recorded on the English east coast and the Isle of Man.

Coniferous forest with dense undergrowth and brushy edges and clearings. On passage and in winter on farmland with hedgerows and thickets, woodland edges, parks and suburban gardens. 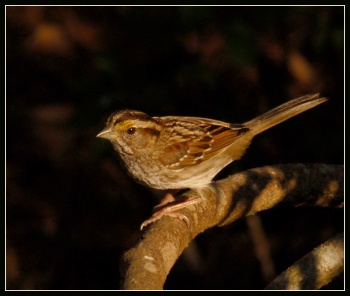 Forages on the ground. Rather a skulking bird, hides in bushes.

Sometimes double-brooded. Socially monogamous; rarely polygamous. Nest is on the ground under shrubs or low in trees in deciduous or mixed forest. Clutch is three to five brown-marked blue or green-white eggs.

In summer a variety of insects, including dragonflies and damselflies, Hymenoptera, heteropteran bugs, and larval beetles. At other seasons, mainly seeds, and berries, and are attracted to bird feeders.

Search for photos of White-throated Sparrow in the BirdForum Gallery

Search for videos of White-throated Sparrow on BirdForum TV