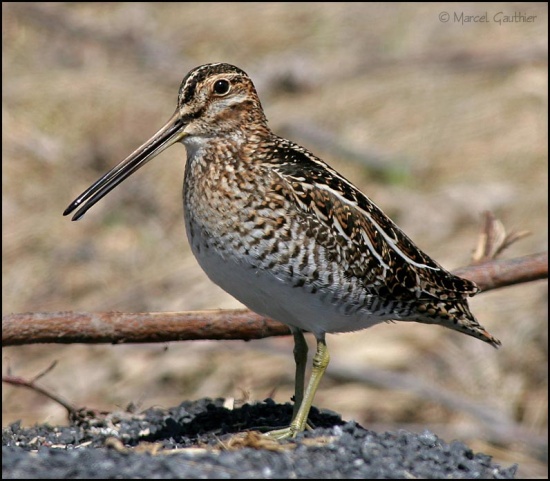 Short, stocky wading bird, 26-28cm (10¼-11 in) . in length, with wingspan of 43-51cm.
Overall similar to other shorebirds, with long legs and rounded body. Long straight bill, brown and white plumage with strong longitudinal stripes on head; dark spotted back and breast, and buff to white underbelly Black eyes are set back on head. Greenish legs and (large) feet.

It is almost identical in appearance to Common Snipe but has narrower white edge on the wings, and differs in having eight pairs of tail feathers instead of seven.[1]

Breeds from Aleutian Islands and Alaska to southern U.S.; winters from U.S. to northern South America.

Formerly lumped within Common Snipe (gallinago) of the Old World.

Freshwater marshes and swamps, and in open country near lakes, rivers, and ponds.

Usually solitary in open ground near water. Secretive; moves slowly and methodically remaining concealed with its camouflage coloration; difficult to spot until it flies.

Probes in mud for insects, larvae, and worms.

Nests on the the ground in well-concealed nests.

Search for photos of Wilson's Snipe in the gallery

Search for videos of Wilson's Snipe on BirdForum TV