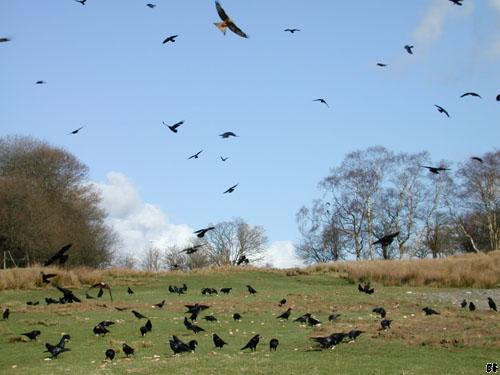 A composite reserve in the upper reaches of the Wye/Elan river and consisting of 22ha at Dyffryn Wood, 8ha at Cwm yr Esgob and 40ha at Glanllyn.

These are mainly deciduous woodland, mostly Sessile Oak on steep hillsides, but in addition there is 260ha of heather moorland at Carn Gafallt. These areas are among the richest for breeding birds in western Britain.

Breeding birds include Northern Raven and Tawny Owl with typical Welsh woodland birds such as Common Redstart, Wood Warbler and Pied Flycatcher. Other breeders include Garden Warbler and Blackcap, other warblers and Spotted Flycatcher, six species of tits and finches including Siskin and Lesser Redpoll.

On the upper fringes of the woods where they border the moors there are Tree Pipit and Whinchat while higher still are Stonechat, Northern Wheatear and Red Grouse.

Along streams and rivers Goosander, Common Sandpiper, Common Dipper and Grey Wagtail nest. The area is rich in raptors with Sparrowhawk, Common Buzzard and Kestrel breeding and Red Kite and Peregrine Falcon regular.

There is a rich and varied flora in these reserves, especially mosses and liverworts. Butterflies recorded include Pearl-bordered, Small Pearl-bordered and Silver-washed Fritillaries, also Purple Hairstreak.

Gigrin Farm, adjacent to the Dyffryn RSPB, reserve is a winter feeding site for as many as 20-30 Red Kites. Meat is put out for the birds each afternoon and they can be seen at close range from a hide.

This area is situated in Powys, in the central uplands of Wales.