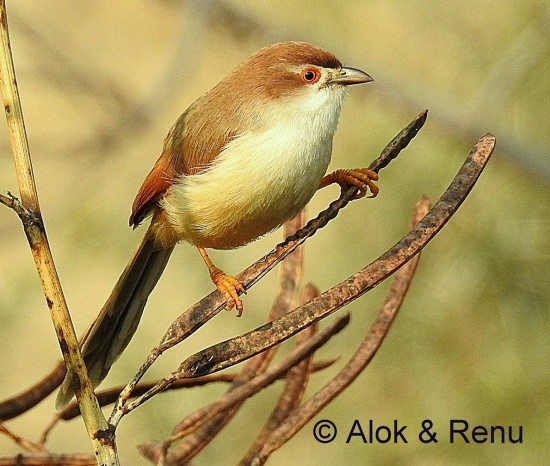 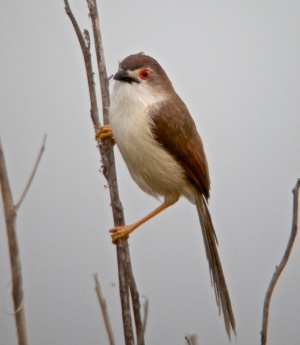 Juveniles are much paler and more rufous above, have a browner bill and darker eyes.

Could be confused with Jerdon's Babbler, Slender-billed Babbler or Jungle Prinia.

South Asia. Found on the Indian Subcontinent (Pakistan, India, Nepal, Sri Lanka, Bangladesh) and east over Burma to Thailand, Laos, Vietnam and southern China.
Common in parts of its range.

Open grass and scrubland, secondary growth, thorn-jungle, tamarisks, edges of cultivation, reedbeds, fernlands. Usually in the lowlands up to 1500m.

Clings to twigs and reed stems sideways or upside-down like a tit. Seldom on ground. Seen in pairs or outside the breeding season in small groups, often associated with Prinias.

Feeds on caterpillars, grasshoppers and other insects. Takes also spiders, berries and nectar.

Breeding season from March to November in most of its range. The nest is a small, cone-shaped cup made of coarse grass, fibrous bark strips, dry plant fibres and bamboo leaves. It's suspended between upright stems of reeds, grasses, sugar cane or monsoon plants or wedged in a small tree, shrub or bush. Lays 3 - 5 eggs.

Search for photos of Yellow-eyed Babbler in the BirdForum Gallery

Search for videos of Yellow-eyed Babbler on BirdForum TV