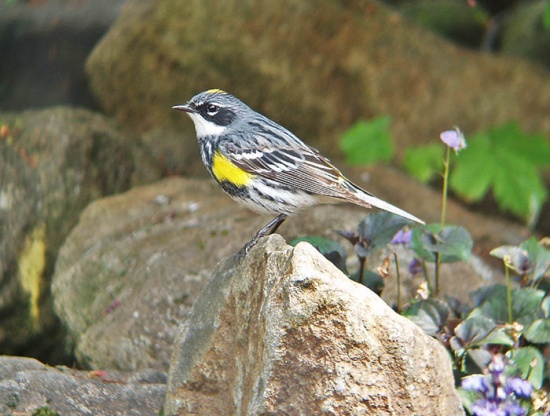 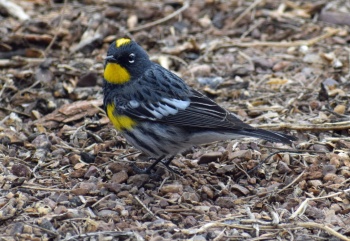 14–15 cm (5½-6 in)
Yellow patches on rump and sides unique but those on the sides occasionally lacking.

Females are more brownish and in the Audubon's form may have whitish or buff throat.
Outside of breeding plumage, both sexes become duller but usually still show yellow rump and side patches. 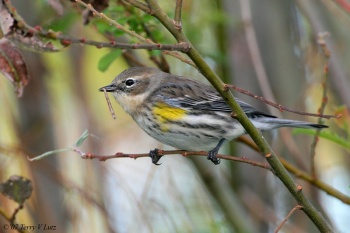 Breeding males of the Myrtle form and the form sometimes called Audubon's Warbler both have grey mantle with black stripes.

The Myrtle form has white throat and black on side of head mostly surrounded by white below the grey crown, while Audubon's have yellow throat, reduced white markings and less contrast between ear-coverts and crown.
Both forms have white wing bars but more extensive white feather edges in the Audubon's form. The Audubon's form become blacker in the southern parts of its range. 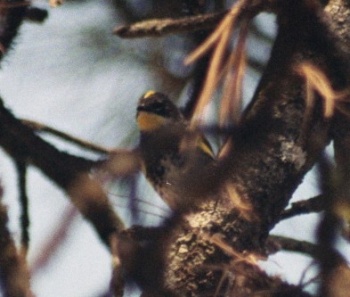 North America's most common warbler. Breeds from Alaska east to northern Quebec (absent only in arctic region) south across most of the western United States; northern Minnesota and Michigan; New York; western Pennsylvania, and New England; also along the Appalachians south to West Virginia.

Found anywhere in North America in migration. Winters in southern United States, along the west coast north to Washington, and in Central America. Rare in northern South America. 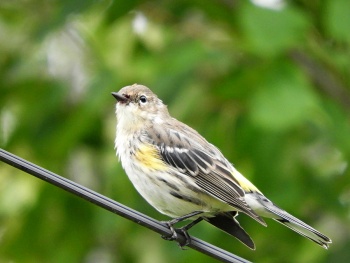 Formerly placed in genus Dendroica. The eastern (Myrtle) and western (Audubon's) races of this species were once considered separate species. Some authorities still do. 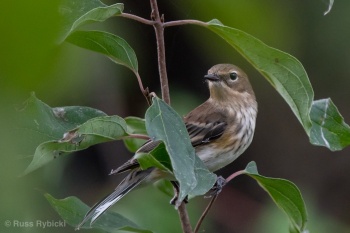 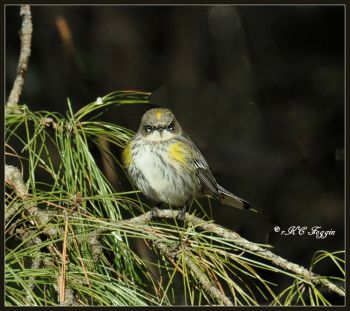 Diet mostly insectivorous but will eat berries and other vegetation. Audubon's group eat some fruit in the winter months.

Nest is a bulky cup of twigs, grasses and moss, lined with hair and feathers usually in a tree but sometimes on the ground. Clutch of 3–5 eggs, usually four. Nests fequently parasitized by Brown-headed Cowbird

This species is a largely "facultative migrant" responding to changing food supplies. Otherwise short-distance to long-distance migrant, and in autumn moves later than do most other parulids. Race S. c. goldmani.

Search for photos of Yellow-rumped Warbler in the gallery

Search for videos of Yellow-rumped Warbler on BirdForum TV