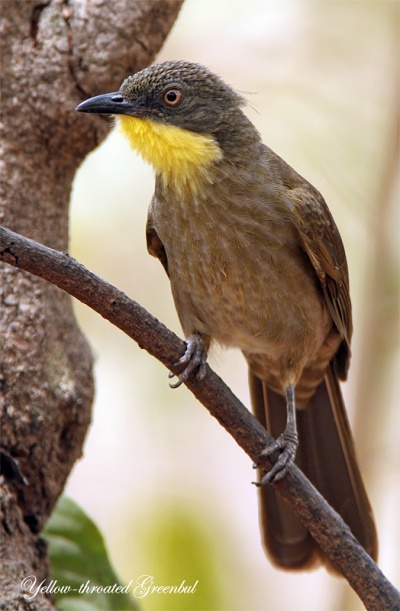 Photo by scottishdude
The Gambia, March 2010

Females are smaller than males.
Juveniles are darker overall and have a whitish throat.

Open woodland, gallery forest, orchard-bush, thickets, riparian bushes and scrub.
Lowlands and medium elevations. Up to 1800m in Cameroon, up to 2300m in East Africa.

Breeding season differs through range. Probably a co-operative breeder. The nest is a cup of small twigs, rootlets, leaf stems and dry leaves. It's placed 2 to 10m above the ground in a tree fork concealed by dense foliage. Lays 2 eggs. parasitised by Red-chested Cuckoo.

Search for photos of Yellow-throated Greenbul in the gallery