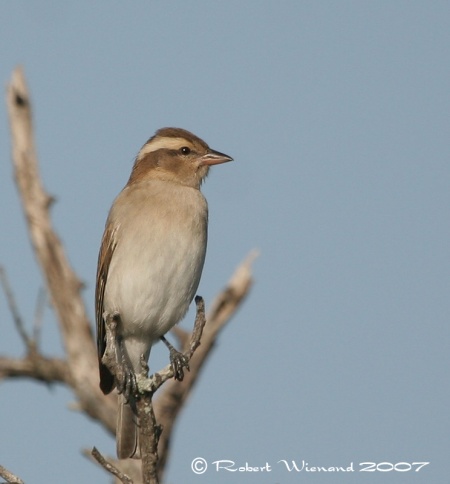 Sexes similar. Juveniles are like adults but warmer brown and with a buffish supercilium.

White-browed Sparrow-Weaver is larger, whiter below, broader white supercilium, and has white rump.

The geographical variation is poorly marked and some authorities treat this species as monotypic.

The diet includes seeds, nectar and insects. Forages mainly in higher branches of trees, sometimes on the ground. Usually seen singly, in pairs or small flocks. Outside breeding season also in larger flocks.

Breeding season according to rain. The nest is a loose ball made of grass and feathers. It's placed in a hole in a tree trunk. 3-4 green eggs are laid.

A resident species with some wandering outside breeding season.

Search for photos of Yellow-throated Petronia in the gallery