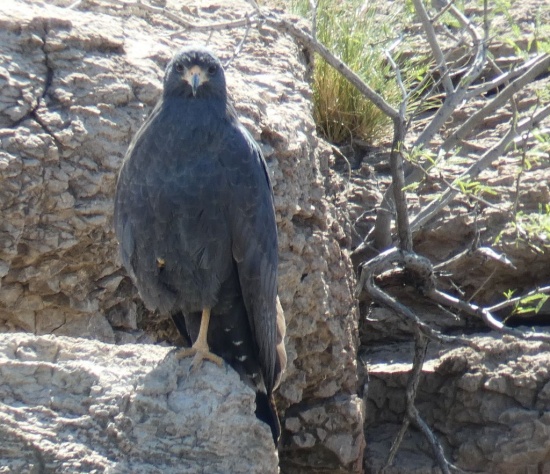 Immatures: similar apart from small white spots on the breast and tail, and narrow grey and black bands with a broad dark tip. 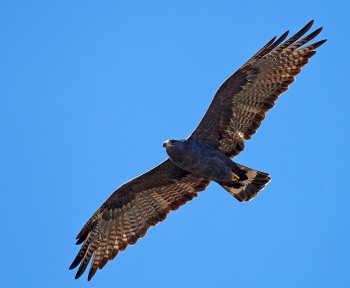 Surprisingly similar to Turkey Vulture, best separated by the dark band on the trailing edge of the wing, and if seen well, by the bands on the tail.

California, Arizona, New Mexico, and western Texas to southern Brazil, Paraguay, Bolivia, and northern Argentina. Non-migratory in most of its range, usually considered migratory in northern Mexico and the US.

Widely varying habitats: Wet and dry forest from pine to deciduous and evergreen rainforest, to open semi-desert to marsh, mountains to lowland plains. Seems to prefer habitats with water nearby. Reportedly often in areas where Common Black-Hawk also occurs, but then found at higher elevations.

Usually seen singly mostly flying low and with wings raised into a dihedral.

Their diet consists of small mammals, birds and lizards; it's possible they also eat some frogs and fish.

The nest is constructed from sticks built at the top of a tree or maybe on a cliff. The clutch contains 2-3 white eggs, usually with brown marks.

Search for photos of Zone-tailed Hawk in the gallery