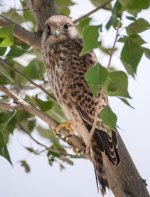 The first digit in the type designation indicates the magnification factor. With 10x56 binoculars, the observed object appears 10 × larger than with the naked eye. To put it into simpler terms, the distance to the object shrinks by the magnification factor, i.e. a deer 400 m away looks like it is only 40 m away when you look through 10× binoculars.

​
Typical binoculars for free-hand observation feature 7x or 8x to 10x magnification. Higher magnifications deliver a larger image and, in theory, better detail recognition, but this benefit quickly becomes the opposite due to the effect of hand tremor increasing significantly. This is something that everyone should test themselves. When in doubt, a lower magnification is more enjoyable and the better choice in the long run. Apart from a steadier image, lower magnifications (e.g. 8 x 42 compared to 10 x 42) also offers additional benefits: