Since there has been much talk and speculation about the new MeoPro Air which recently started shipping I thought it would be appreciated with a direct side by side comparison with the current Meostar B1 Plus. The best thing would be to compare the same magnification and objective size, so that's what we are going to do.

A friend eventually tracked down a 10x42 MeoPro Air in the Netherlands and has one on the way to him.
Price was very good and lower than the German *bay pricing by 150€ which makes the MeoPro Air a potential bargain buy at that price!
I paid €1100 for the B1 Plus with express shipping and he paid around €800 with shipping. Will confirm exact pricing.

There will be no fancy transmission graphs and it will for the most part be a subjective review from two optics nerds but we have a long history of glass nerding and will provide subjective ergonomics, optical impressions, some photos and some comparisons to the competition.

I might even get to borrow a Zeiss SF10x42 for a day to throw in the mix.
Specs will be posted from the Meopta documentation provided.

Since the 10x42 HD B1 Plus is allegedly improved over the B1/B1.1 with the latest coatings as well as improved mechanical and optical tolerances it is possible that it is a slight notch up from the B1/B1.1. Since the two previous generations are well known and have a good report I think we can assume they are very close in performance and that the B1 Plus at least is representative of the current top of the range Meopta performance.

It will be very interesting to see what the MeoPro Air is capable of and if they end up being virtually indistinguishable!

It will not be a long comparison but in short we were both kind of disappointed in the MeoPro Air 10x42 HDED.
Starting with the positives it felt good in the hands for both of us. Build quality seems on par for the price point.

Focusing wheel was a bit molasses like. Very high friction, at least even.

In terms of perceived/subjective brightness and clarity the Meostar is visibly the best. The Viper and the MeoProAir are not bad at all but it feels like a slight veil over the image - though the Viper has very good contrast it is a little muted compared to the Meostar. The MeoPro has a nice rendering but is also a bit behind the Meostar.
Clarity Meostar>Viper/MeoProAir

In terms of optical quality it was clearly behind the Meostar 10x42HD and more on par with the Vortex Viper 10x42. But, the Viper is sharper in the center and about as sharp as the Meostar. The Viper has a more dramatic sharpness fall off mainly due to field curvature. Again the MeoProAir is sharp and has a larger sweetspot than the Viper and perhaps a more pleasing image overall at far distances. But, the Viper is sharper in the center for sure.
Sharpness: Meostar/Viper>MeoProAir

Chromatic aberration control is very good with all three. Meostar is stellar in this regard and the Viper and MeoProAir are very good in the center. With the Viper I could get CA flashes in some instances but overall the MeoProAir and Viper are equally good at CA control.
CA control: Meostar>Viper/MeoProAir

Strong light / backlit conditions are handled very well by all three. I much preferred the Meostar in this regard as the lack of CA really helps in backlit conditions with detail separation. All did really well though. Essentially a tie.

Ergonomics: debatable. We both thought the MeoProAir the best in overall handling. I really like the Meostar despite or perhaps because of the weight. I had no issues at all with the Viper which has the smoothest focusing of the three by a good margin.
HOWEVER - the MeoProAir focuses in the "wrong" or "other" direction which is a real deal killer for me!
Ergonomics: Viper/Meostar>MeoProAir (due to focusing direction)

It took us some time to get a grip on focusing the MeoProAir and I never got it 100% right though at the end I thought it a nice pair of binoculars but I had trouble snapping into focus on the birds that were around. Both the Meostar and the Viper are easy to focus and the most relaxed view is with the Meostar. I found the MeoProAir tiring after some time despite fiddling with the dioptre adjustment.

Verdict: I would not trade a Meostar towards a MeoProAir. The latter was perhaps even a bit nicer than the Geko/GPO equivalent and they are in the same price bracket. I might have preferred a Geko/GPO personally as it was a bit better with glasses.
As a whole I find the MeoProAir a product that will satisfy people who are not after the very best optical performance - but in this category the competition is fierce and there are similarly performing binos at lower cost. The MeoPro Air sweetspot is perhaps larger than most in this class but if you are wearing glasses there are better and cheaper options.

On the last image (if clicked to enlarge) you can see the high eye cup ridge on the MeoPro Air that makes it less suitable for glasses for me despite having more eye relief on paper.

MeoPro Air is lighter but longer. I like the dense brickety feel of the Meostar.

The MeoPro Air is already returned to the seller since it did not meet the expectations. I did not bother to post specs/comparisons since it is in my book no match for the Meostar and more on par with the Viper which is a mid tier binocular with some good traits. Comes hard to recommend. 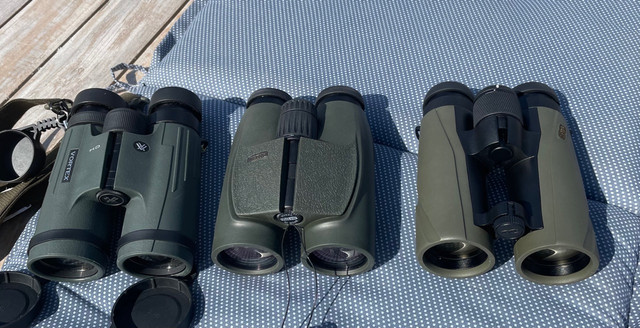 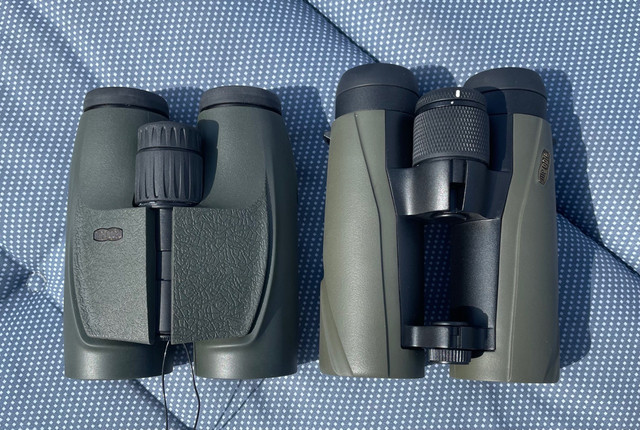 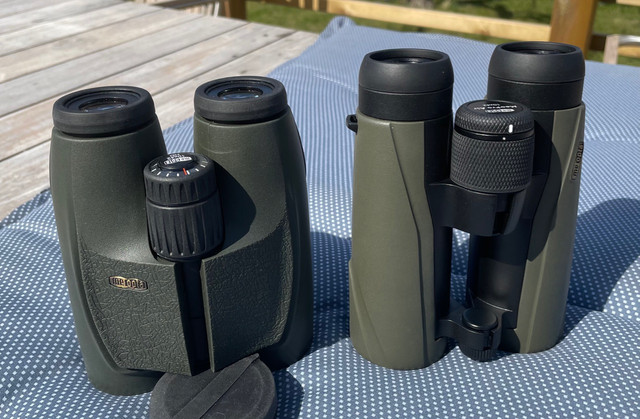 In addition and in retrospect:

I honestly think it is not a bad pair but I can't say I would recommend it, there are a few competitors I would probably choose over the MeoPro. The Meostar really is a step up, maybe even two.

The old Meostar's did a good job of competing as an Alpha but at a much reduced price. That seems to be the consensus. But the current listing of Alpha's is 'taking off' with the NL, SF and just a few years back the Noctivid. So Meopta, in order to remain competitive in the somewhat Alpha class, had to respond.

So rather than having the Meostar being their semi Alpha class, Meopta decided to up the game in appearance / design and thus start from scratch. But this is a process as the company has to slowly bring people on board and not lose their current market share.

Thus, "the soon to be, bringing upon us" of the Meostar B2. The B2 will again follow Meopta's previous position and be a semi-alpha but priced way below the current crop of Alphas', so more like a $2000 price point to compete with the $2800-$3200 competitors.

So they will have the Meostar B2 be their Alpha (under the same design as the B1Plus), and the Meopro will be their $1000 line (not as good as the B1.1)

There is something about the ergonomics of the B1 Plus / B1.1 that I really like and I think that Meopta is on to something here and I bet the upcoming B2 will have the same design.

Was the Viper you tested the 2018 version Made in China, or the pre-2018 Made in Japan? I'm surprised the Viper performed better than the MeoPro Air considering that the Viper is half the price of the MeoPro Air