On Saturday I visited this area. I parked on the A30 at SU783583 as the industrial area mentioned by Paul was a refuse/recycling site right next to a travellers site and I didn't fancy my car being recycled! From here a short path led through to the B3016 from where it was easy to access Warren Heath, the entrance to which was handily signified by dumped rubbish.
Whether it was because of the lateness of the season or the heat Odonta were in fairly short supply. In a couple of hours I saw Emperor, Migrant and Brown Hawker, Common and Black Darter, Small Red, Red-eyed, Emerald and Common Blue Damselflies plus many Grayling Butterflies.
Access to the main pools was not too difficult but the stream between them was heavily overgrown and trying to follow a path along this resulted at one point in struggling through head-high bracken, while trying not to break my ankles on the uneven ground.
Despite my lack of success in finding Golden-ringed Dragonfly this looks a good site and if I lived closer it would be worth a visit earlier in the season but it was a hard slog, especially compared to Thursley.
In contrast to Thursley I saw just one other person while there despite it being a Bank Holiday.
Tim
F

I didn't think I'd be adding more to this thread, but it was a nice day yesterday in Southern England, and out I went.

Clare and I travelled down to Longham Lakes so that I could photograph the American Black Tern. She'd already done it while I was on Shetland, but came along for the added wildfowl at the site and as it turned out in discussion on the way down, because both of us had a sneaking suspicion that the recent records scattered across the country of Vagrant Emperor might mean one was lurking at Longham Lakes - it does have a track record for rare dragons in general, and I'd dipped a Vagrant Emperor there that flew over my head in the summer...

The tern was showing well as we reached the second lake, and we then picked out first the Ring-necked Duck and then a female Scaup among nearby Tufted Ducks - the birders already there seemed slightly miffed by having these picked out from under their noses when they'd already scanned the ducks several times. o

About 1330 with the day not so much warm as hot and both Migrant Hawkers and Common Darters whizzing about in profusion I suggested to Clare we should have a look at the dragonfly pool. Not long after reaching it we had a large, sandy-brown hawker patrol right along the back of the pool, before disappearing behind the left-end reedbed. Wow! That looked right... it was a tense wait until it came back and flew for a short stretch straight towards us before turning away and then being lost as it zoomed skyward after prey.

Head-on I'd had an eyeful of brown-and-green eyes while side-on the sandiness (as Clare commented, "desert-coloured") was highly distinctive, and we decided we had enough to put the news out that we'd found a Vagrant Emperor. :t:

So a happy ending to the 2019 dragonfly season: a rarity find and I got my 40th Odonata species for the year (though I had no chance of a picture). Grand day out! :king:

Congrats on that John. I've seen a fair number overseas but yet to see one over here. I'm off to southern Spain in a couple of weeks so will look out for them there.
F

aeshna5 said:
Congrats on that John. I've seen a fair number overseas but yet to see one over here. I'm off to southern Spain in a couple of weeks so will look out for them there.
Click to expand...

Good luck! Hopefully you will have a good chance over there.

Farnboro John said:
Good luck! Hopefully you will have a good chance over there.

With a good weather forecast and time for dragonflies definitely running out I decided to take a half day and have another go at the Vagrant Emperor(s) at Longham Lakes on Tuesday afternoon. I arrived at about 1230 to find almost still air and bright sunshine though with a threat of cloud encroaching from the North-west.

Roaming the North shore of the lake trying to relocate the Vagrant Emperor (which was probably an Empress, as I didn't clearly register the saddle on any view and females have a much less contrasting pale violet one) I was suddenly stunned when an adult Otter popped out of the bushes at the head of the bank that falls away to the fields North of the site, galumphed in that rocking-horse way of mustelids across the wide path and dived into the reedbed at the lake's edge! I shouted to two nearby birders but it managed an Otter disappearing act and I didn't see it again - though later in the day I suspected its presence on the Western lake when all the ducks near the shore erupted away and even the Mute Swans veered further out and kept a wary eye on the edging vegetation. Access to all but the Eastern end of the Western lake, and consequently the dragonfly pool, was impossible throughout my stay due to management work (flailing the brambles and hedges with a JCB and attachment.) This was more than slightly annoying. I did see the American Black Tern again but it was far away across the lake: I didn't bother looking for the scarce ducks.

I covered an increasing length of the Eastern lake's shoreline after the Vagrant Emperor finally gave me the slip and didn't see it again, although I had loads of Common Darters and Migrant Hawkers including mating pairs of both species hung up and ovipositing. The other two birders I'd spoken to did get a view of it near my original sighting.

With cloud now in the majority and the temperature dropping dragonfly activity practically vanished by about 1700. Before leaving I added one of two Great White Egrets present to my tally for the day and left feeling it had been a very worthwhile use of a half day even without gaining a pic of the target species. 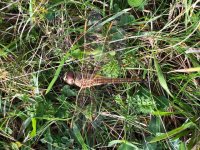 Gripping! Interesting to see pretty much absence of saddle - no wonder I couldn't see it on the flying Longham dragon. I noted from the Portland Obs blog that it was available for an hour - nice!

Odonata and us (still in Poland, but not for long)
2