Depth of field describes the area in front of and behind the set range that is still perceived by the eye as being sharp. Expanding this area depends on the magnification, distance and accommodation capabilities of the eye.

At short distances and up at close range the depth of field is very low and very precise focusing is required. The greater the observation distance the higher the depth of field. If binoculars are focused at infinity (e.g. the horizon), everything from a distance equaling the “square of the magnification” is focused crisply.

Example:
If you set a pair of binoculars to infinity, a 7× pair delivers a crisp image from about 50 m, a 10× pair from around 100 m. This is the case for older users. For younger users, the focus extends considerably farther into the foreground because their eyes can accommodate better.

Accommodation is the ability of the eye to focus on different distances. This ability decreases with increasing age, i.e. younger people have a clear advantage – they can perceive a much larger depth of field. Older people have to refocus more often. However, really relaxed and longer observation is only possible at the distance set – even for young people. Everything else tires the eye which is noticed at the latest when autofocus binoculars are used.

How the lens elements move mechanically during focusing with single eyepiece focusing or with a center drive has no effect on optical properties and depth of field. Even the prism system (Porro or roof prisms), which only affects image inversion in different ways does not influence the distribution of sharpness – despite many prejudices to the contrary.

All binoculars with the same magnification deliver practically the same depth of field – regardless of the brand, prism, or focusing mechanism.

Left: Binoculars with porro prisms. Right: Binoculars with roof prisms.​
Another effect that is caused by magnification is image compression, and this can influence the perception of ‘depth’, that is, how much distance is perceived to be between objects in the foreground, the middle distance and far distance. This is not the same as depth of field but it has a related effect on the image. 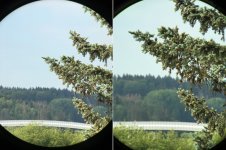 Member
You must log in or register to reply here.

B
Is image shake related to field of view?