Hi everyone. I am definitely into the paralysis stage of my analysis. I'm looking at upper tier, 8x56 models to help me out during twilight hunts. I currently own a pair of Minox HG 8x43.

Anyway, during my research I discovered an ad for Minox X-HD 8x56 that claims Abbe-Koenig prisms. I contacted Minox directly who promptly responded that they use Schmidt-Pechan prisms in their X-HD series. Just a heads up.
D

The Minox X-HD 8x56 does have that typical Abbe-König shape and retailers seem to agree that it uses AK prisms (I cannot find any info on prism type on the official Minox website). The other binoculars in the X-HD line use Schmidt-Pechan, so that might have confused the customer support representative.
W

If you have a look for the optics trade you tube video they also state ak prisms -those guys tend to know their stuff and they certainly look like the ak type given the form factor.

I've not tried the minox but use an 8x56 ak prisms model as my general birding glass, I can recommend the format if your comfortable with the size and weight.

They tend to be very big and heavy compared to most regular birding bins and truthfully you only need them if you bird at dawn and dusk or want one binocular to do everything. Bigger does tend to be better with optics if the qualities there but for birding there are drawbacks in terms or portability.
S

William Lewis said:
If you have a look for the optics trade you tube video they also state ak prisms -those guys tend to know their stuff and they certainly look like the ak type given the form factor.

I've not tried the minox but use an 8x56 ak prisms model as my general birding glass, I can recommend the format if your comfortable with the size and weight.

They tend to be very big and heavy compared to most regular birding bins and truthfully you only need them if you bird at dawn and dusk or want one binocular to do everything. Bigger does tend to be better with optics if the qualities there but for birding there are drawbacks in terms or portability.
Click to expand...

Thanks William. I have seen the video of which you speak and my exchange with Minox Wetzlar has now given me an uneasy feeling about their ability to adequately support their products. It might be enough to remove them from my list.

I'm trying to avoid getting hung up on AK vs SP, or any other spec, but it would be disappointing to think one is getting one thing yet receives another.

Right now I'm leaning toward the Meostar B1 Plus.
W

Don't discount the habicht 7x42 ga. Or shoot anything unnecessary for that matter!
R

I had a Zeiss FL 8x56, they are AK prisms, and I agree with William, they are awesome dawn and dusk binos.
But they are very heavy, and in reality, I didn't do enough low light observations to warrant them, so sold them on. But the optical quality and light gathering was fantastic, due to both the 7mm exit pupil, and the AK prisms, along with Zeiss quality glass of course!
In average daylight they offered no more than my 10x42 Meoptas, and that weight penalty was just not worth it in the end.
For what it's worth, I have become a big Meostar fan in a short period of time, as I have been hugely impressed with my 10x42 Meostars.... fantastic binoculars.
Last edited: Nov 11, 2022
S

William Lewis said:
...Or shoot anything unnecessary for that matter!
Click to expand...

That's mainly the point - trying to pick out the buck. I was contemplating 10x for awhile - not sure if these 52-year-old eyes would be able to take advantage of the 8x's exit pupil. Then again, as a glasses wearer, not searching for the sweet spot would be beneficial. My experience with rifle scopes is that as the sun goes down, so should your magnification.
B

I have the AK-prism-model Kite Cervus HD 8x56. Really nice bino (works great with glasses BTW), but I suspect, "Made in China" as it seems to be the exact same bino as the GPO Passion 8x56 -- at least when comparing the pics that Neil posted in his review.
I was interested in those Minox X-HD myself (the 8x44 model in my case). The website is very sparse with details. To this day I couldn't even verify if they are made of plastic or magnesium. One website says this, another one says something else.
I downloaded all the printed material, too and the info wasn't in there either. It seems, Minox (who belong to "Blaser"-group AFAIK) are not interested in letting people make an informed buying-decision. Too bad because a "Made in Germany" bino for that price would be quite nice. But "Made in Germany" is not the strongest label of origin out there.

@scratchypants I also like having a nice 8x56 at hand. I don't do a ton of extreme dark conditions, but it's something that comes every now and then (usually for something special, like owls). I do have an AK 8x56, the Vixen New Foresta (a sibling is sold under the German brand DDOptics, Pirschler Gen II). It is nice and has pretty good low light capabilities, but at 1230 g they are a bit of a beast.

Regarding looking for another low light but lighter alternative, I remember when I first bought my first 8x56, a Delta Optics ROH, which has pretty decent light transmission figures. At that time I also had a 7x42 Zeiss Victory FL and I could do extensive comparison between them and, to be honest (to my 44 year old eyes at the time) only in the darkest conditions could I spot a noticeable difference. In dusk or dawn, I think they showed a similar level of clarity. Only well beyond twilight, actually during the night, could the 8x56 show its strength.

So now comes what I have done, given that I like the 8x56 Vixen but I find I end up using them less than I would if they were more portable. I remembered reading a review in Allbinos from a "quirky" format, 8.5x52 (another Minox, incidentally, an HG BR), and that caught my eye. It spots a 6 mm exit pupil, probably more than enough for you or me, and it weights 775 g, just like an 8x42. Yes, it's all about compromises, the Minox has a narrow FOV (the Vixen is quite good at that with a 7,2º FOV) and apparently it suffers from some CA issues. They're on their way as I type this, so I will report when I get them, but there are a couple of entries about them here in BF. It is a not-so-new design, but it was the HG series, apparently made in Germany, so chances are it is still fully usable.

I hope I could give you some ideas to think about

Looking at the Minox website, there doesn’t seem to be any reference to the prisms used in the 8x56 X-HD’s (or the two smaller X-HD models).
So the lack of mention of A-K prisms - and therefore no stress on them as an advantageous feature - perhaps/ likely indicates their absence (?) * 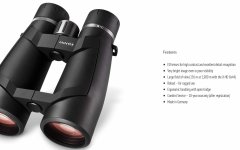 Instead on the X-HD pages the value aspect is stressed:
• All X-HD series binoculars are top optics at top value - Made in Germany.

• (from a supposed user) "It’s unbelievable what others are spending on their binoculars.
How cool that I found just the right ones for me: the best of MINOX (and for my bank account)."

- - - -
* It is possible the incorporate A-K prism like optical axis offset - as shown with the Minox 8x56 - when using Schmidt-Pechan prisms.
See the links in the second part of post #2 at: Roof Prisms Used in Binoculars

. . . So hopefully someone will be able to come up with something more definitive.

Minox does state on page 23 of this product catalogue that the 8x56 BL HD (which I believe is the same as the X-HD) comes with Abbe-König prisms. https://fotoiben.de/WebRoot/Store23...01F/MINOX_Katalog_Fernglaeser_2018_DE_web.pdf 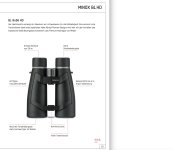 John A Roberts said:
...Looking at the Minox website, there doesn’t seem to be any reference to the prisms used in the 8x56 X-HD’ ...
Click to expand...

Yes, and after poking around authorized dealer and review sites and finding conflicting statements I decided to go straight to the source. Given the shape of the tubes and the reputation of the various sites I visited whilst conducting my research, I believe the answer I received from Minox to be wrong.

This (for me) is a fairly expensive, non-necessary, luxury item. I have plenty of choices. Call me fickle or even paranoid, but I do not want to imagine having to work through a support issue with a company that might not be providing adequate training to its customer service personnel.

One other thing to consider is that sometimes the person responding from customer service might not be experienced enough and just relay what scripted information they have on hand, or interpret it if there's not enough details.

B
Other benefits of Abbe-Koenig besides light transmission