Mini competition across Lithuania, choose a tower or platform, sit on it from 5 am till 1 pm, record how many species of birds in the allotted time.

Seemed a good opportunity to do a 'big day' on my land, something I had never done before. Mulled whether to do it from my tower overlooking my floodforest or my 'observation deck' aside my cabin. Opted for the second, not least that Whooper Swans are showing interest in breeding close to the floodforest tower and I have no wish to disturb them. On top of that, not only does my observation point beside my cabin have superb skyscapes for picking out many species over neighbouring meadows and forests, but I can also hear most of the flood forest species when singing at dawn. And it has easy access to coffee in my cabin a couple of metres behind.

What this 'observation deck' actually consists of is a landscaped heap of soil resulting from my excavation of pools beneath. And a nice bench on top.

So to the big day, scrapped the 5.00 am start when I peered out of the window to total mist obliterating everything. Not much difference at 6.00 am, but through the open door of my cabin, I could hear a Bittern booming, Cranes yodelling and a general mish mash of species in dawn chorus. Time to start - mostly by voice, 26 species in the first half hour, including Lesser Spotted Woodpecker and Black Woodpecker, a faint distant Savi's Warbler, Common Snipe in display mode and a bevy of vocal Wrynecks signalling an arrival of these overnight.

As the mist cleared over the next half hour with skies blue, plenty more additions - White Storks on distant nests, telescope adding their squattor Tree Sparrows, plus the first Marsh Harrier of the day, Green Sandpiper in display, Whinchats on stalks across the meadows, Wood Warblers and newly arrived Icterine Warbler in song in the adjacent woodland, Pied Flycatcher and Cuckoo too. 42 species by 7.00 am.

8.00 am, 53 species, coffee time, Marsh Tit at the adjacent feeder, a relatively rare (for my land) fly-by by four Cormorants, an appearance of my Whooper Swans, the rise in the species tally was now however slowing …the hour till 9.00 am added only eight species, this including my first Willow Warbler of the year and a comparatively rare Yellow Wagtail.

From 9.00 am till 10 am, only four and one of those was Feral Pigeon! Actually this is a rare bird on my land, occasional birds wander from nearby villages periodically in spring or summer.

Careful peering towards where I know they breed finally added a Magpie, shortly followed by a Herring Gull (Black-headed and Common Gulls already seen). So there I was, 67 species by 10.30. This exceeded the total I had been expecting for the whole day.

In glorious sunshine, several Swallowtails drifting by, Orange Tips, Brimstones, Map Butterflies and Peacocks too, but additional birds were now becoming few. When they did come however, they were pure quality - a male Montagu's Harrier and a Common Kestrel migrating north just before 11.00 am (Kestrel is not annual on my land), then three Spotted Redshanks about quarter of an hour later, also heading north. At 11.30, one of the local White-tailed Eagles had the good grace to fly around, I think they are incubating at present, then a very late skein of White-fronted Geese flew over, quite unexpected. And then, polishing off the morning in style, a Honey Buzzard flew through, yet another northbound migrant. I was now on 73 species.

And that was how I thought it was going to end, scanning for Lesser Spotted Eagle or a wayward Jackdaw produced zilch, no hoped for Black Kite or Hobby appeared, no Black Terns in the skies above a distant lake.

All was set to end at 1 pm, but a distant song in the woodland behind caught my attention. Thought I knew what it was, but wandered over to check …and indeed it was, one singing Red-breasted Flycatcher, a superb species to round the tally off.

So the appointed 1 pm arrived, final total 74 species, not bad for a morning upon a bench. Wandering a little across my land, I also could hear a Little Crake, so 75 for my land this day.

Of the teams nationwide, my watch on my little bench came second - a grand effort by one group of observers at a tower in coastal marshes managed 76 species.

Seems to be a lot of additions since my visit, though sadly one great loss!

Seems to be a lot of additions since my visit, though sadly one great loss!
Click to expand...

Year on year, it generally is getting better and better, the closed canopy woodland beyond my cabin is now, thanks to Beaver action, an open marshland complete with breeding Bitterns, Cranes et al. In the open country, the mosaic of grassland and regeneration that I have allowed to develop are simply a pleasure now. The new pools visible beside the bench need a season or two to establish, already Goldeneyes and occasional other birds visit, but in reality they are currently just a very pleasant view from my window 😊

PS this cabin didn't exist then too

Talking about Beavers, it seems I had a Lynx on my land today too. On a quick walk in the morning, I found a very big, but freshly dead, Beaver, its stomach ripped open and partially consumed. When my big day finished, I went back to photograph it, but it had gone!

Found it about 30 metres away, but now very little remaining of it, photo below. A Beaver of this size is a very heavy animal, only a Lynx or Wolf would be capable of killing and carrying it. Also had a brief glimpse of a fleeing middle-sized mammal in the morning - basically all I saw was something vanishing in the foliage, but did give the impression of Lynx. 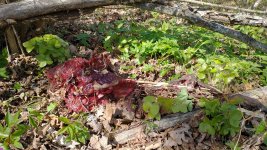 PS this cabin didn't exist then too
Click to expand...


Have you still got the one in the forest that I spent so much time in? Or is it under water now?

delia todd said:
Have you still got the one in the forest that I spent so much time in? Or is it under water now?
Click to expand...

Still there, with new roof

Sounds like a terrific day Jos - and every reason to spend more time on your arse!

A great day in East Yorkshire

A Day in Sunny Mexico