Yesterday, we visited a place where many egrets breed. I saw that this egret is strange. It looks bigger than the surrounding little egrets, but smaller than the Great Egrets. the bill is very thick and short, a bit like the bill of a Intermediate Egret ,but the skin color before eye is wrong.
Thank you!

Are you sure that photo 1 is the same bird as the other photos? I note from the photo numbering that photo one was taken significantly before the others.

In photo one, the bird does appear to have a deformed bill, in that the tips of the bill seem to meet, but there is a gap between the upper and lower mandibles behind the bill tip (which would make it look thicker). Or is it an illusion of the bird's positioning? Anyway, since it's nesting, it's presumably doing OK in life.

But the bills of the bird in photos 2 to 5 don't show this feature - if I had seen this bird I wouldn't have noted anything special beyond natural variation.

In my experience, Great Egrets can vary quite a lot in real or apparent size (like the two in my attached photo, both modesta ssp). 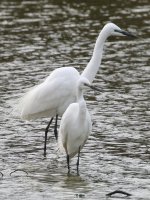 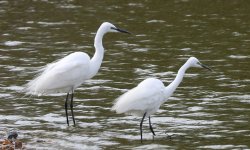 Thank you very much! then they are all great egrets, there is really no other possibility.
I'm not sure if they are the same. There were many great egrets with nests at that time. We didn't see anything special at the scene, but when I came back, I felt that its bill was very short and thick. In my impression, the typical great egret bill shape is very similar to that of the little egret, thin and long.
B

xuky.summer said:
In my impression, the typical great egret bill shape is very similar to that of the little egret, thin and long.
Click to expand...

No, great egret's bill has a relatively much deeper base, so it's dagger-shaped rather than being narrow and needle like as in little egret.
J

I agree that the bill on these photo somehow looks shorter than expected for Great Egret, giving some impression of an Intermediate on some photos. I'm not sure if it's partly due to foreshortening because of the angle we're viewing the birds. But the black bill, blue facial skin, shape of facial skin, and lack of plumes on the head make it clear that this is a Great Egret.

Comparing the branches with leaves (especially the not focuse done in the foreground) and the twigs in the nest in the first photo with the other photos it becomes clear this is the same nest in all photos, only ther ewas a shift of position of the photgrapher between the first and the following photos....
For the bird I also would have said that the bill seems to be a bit shorter than usual (even taking into acount the foreshortening effect) but I can´t make the bird on the nest into anyhing else than great egret (as already said by others)