A personal account of anti-poaching work in Italy - more from LIPU (BirdLife in Italy). (1 Viewer)

Last month I posted a report of action against illegal hunters in the Po delta, northern Italy. In recent years the efforts by the Carabinieri with help from LIPU volunteers has shown that the law can be, and will be, enforced. Here is a personal account by Mario Pedrelli, a prominent member of LIPU, who gives up much of his time enduring discomfort described here for the satisfaction of seeing the guilty brought to account. Translated from the Italian by Lesley Tompkins.

The Po delta and the Bresciano valleys are two of the bloodiest hotspots in Italy for poaching. The efforts of LIPU and the Carabinieri-Forestale to cope with the illegal hunting that is rampant there are described in the first episode of a diary, “Italian anti-poaching”, which we will update throughout the year.

January 2020. Adria, Rovigo close to the Po delta. This wonder of nature that poachers have turned into hell. I meet the officers of Soarda having picked up two military dinghies. We decide to concentrate on four hunting hides found on the lagoon of Barbamarco sullo Scanno di Boccasette, which I already identified in my nocturnal visit on 29 December. The military put on wetsuits and at 2 am we leave, preceded by a Carabinieri vehicle. At the bridge at Boccasette we divide up our several objectives. We walk for a kilometre in the water so as not to leave footprints then position ourselves in the reeds and samphire behind the two huts. The first hunters arrive at 5.45 am and arrange the plastic decoys in front of the hide. At 6.30 am,finally, a hide to our left switches on the acoustic lure and, after a minute, so does one to our right. We decide to move ourselves behind the left-hand hide, but suddenly all the playback devices are turned off: the hunters have learned, by radio, that two birdwatchers with binoculars have set up and are looking in their direction. Luckily the radio in the hide to the north was switched off, and they continue to shoot and play the Wigeon call. And it is there that the Brigadier surprises them, with two electromagnetic lures still running and three modified 5-round shotguns. At 11 am, following two house searches, all is complete. 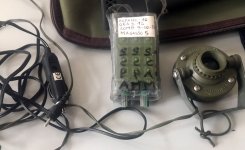 We carry on the operation in the Venice South Lagoon, still close to the delta. An informant tells us of a hide from which geese are shot. It is right in the middle of Millecarpi lagoon: 1,620 hectares of sea; 500 permanent hunting lookouts. To get there we need to pass through the Caneletta Cavaizza (one of four canals that flow into the South Lagoon). It is about 2 km long and the hides are positioned alternately on the banks every 100 metres. All the occupants are tuned to a radio frequency and connected via WhatsApp, ready to raise the alarm in case of police checks. It is 1 am: we moor an unmarked gunboat 10 km from the port of Caneletta Cavaizza with three military personnel in wait. At 1.30 am the five of us (myself and four military personnel) arrive at the deserted port. We inflate the small dinghy, set up the electric motor and leave. In 40 minutes we reach a group of rocks situated 500 metres from the hide. The thermometer says “minus 4”. I believe it is the coldest night I have ever endured in my life. Every 10 minutes three or four 12-gauge gunshots keep us company. At 4.30 am they set up the plastic decoys and at 6.30 am switch on the electromagnetic lures. Finally, at 9 am, with a rising tide we can intervene. With binoculars I see our boat arrive – it seems like a speedboat. I look at the hide through the telescope and I see panic break out among the hunters. They have understood that we are on to them. There are four of them. The Carabinieri find the loudspeakers hidden in one of the boats but not the playback devices. The Lieutenant, who is with me, orders them all to strip: only at that point do they surrender, and from their pants extract two devices. Four house searches follow.

October 2020. Brescia, Bergamo, Mantua, the ways of poaching are abundant and impenetrable. With five military patrols of four men we find several hunters in the province of Brescia using lures with illegal rings (all captured birds, not bred). We discover numerous captured specimens belonging to protected species, while hundreds of birds are held illegally, in particular Chaffinches and Siskins. In the garden of a villa we manage to locate 25 primed spring traps; after a day and a half of continuously lying in wait we manage to surprise the owner. In the house are hidden another 10 traps, in addition to around 20 Robins in a freezer. 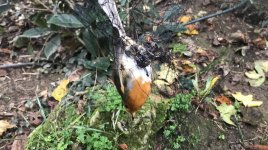 ​
Another brilliant operation takes place in the next 15 days. At 1 am, in the province of Mantua, we surprise a poacher who is catching thrushes with 80 metres of net. In his attempt to escape he tries to run down a soldier and ends up off the road. In his house are further lengths of net, stakes, lights and a good 60 decoy birds with counterfeit rings.

We return in the afternoon to the Brescia area: in a villa in the centre of the village, with a garden protected by a double fence, a net of around 60 metres is being used to catch small passerines. We also spot a fixed, illegal hunting lookout containing two abandoned, but loaded, shotguns. In the house search dozens of traps turn up, along with around 100 protected passerines in a freezer and 60 decoy birds with counterfeit rings.

Other spoils arrive in the following week with the seizing of 25 decoy birds with counterfeit rings. In the freezer of a young man’s house – caught with a gun for shooting Siskins under his jacket – around 100 Long-tailed Tits, Marsh Tits and Siskins are found; in addition, 15 decoy birds with counterfeit rings. The balance of the operation: 106 people reported and over 2,000 birds seized, as well as weapons, traps and more.

January 2021. We return to the delta. Again, cold, fatigue, and heart pounding for two weekends with 12 amazing Carabinieri forestali. We leave from the Vallona lagoon. Manoeuvring cautiously we manage to infiltrate a hunting party to observe the huts in which they are using electromagnetic lures. After having filmed and photographed the hunters (including using a Carabinieri drone) we approach the huts. Seeing us arrive, the hunters hide the lures inside watertight boxes hidden on the lake bed. Searching the (freezing cold) water the Carabinieri nevertheless manage to recover the lures. Nine reports are made.

The next weekend we move to Boccasette, where after two nights spent sleeping on the beach in a sleeping bag in Siberian temperatures the Carabinieri report another two hunters who are using acoustic lures. On Sunday, meanwhile, we monitor two hunters already “observed” the week before. Checking the weapons and discovering crimes of various kinds we find a stuffed Shelduck and an illegal weapon. The arrest is inevitable. The other of the two – not nicknamed “the butcher” for nothing – is reported for having set up an illegal slaughterhouse for ducks, as well as for possessing several illegal weapons. What we find is terrifying: 970 frozen ducks (including around 500 teal, Mallard, Pintail, Wigeon, and around 40 Gadwall). In his freezer of horrors there was even a protected species, a White-fronted Goose. In addition to all the machinery for illegal butchering, 26 shotguns and 6,500 cartridges are seized from the two. 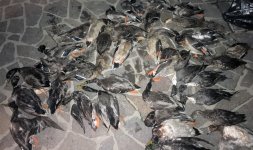 ​
An important counter offensive against those who have transformed into a war on nature this paradise of waterbirds that is the Po delta. A place that deserves to be saved, and fully protected.

Crazy the reality having to be dealt with though.

Depressing how common the illegal hunting remains, but good on Mario and LIPU

Very encouraging: what an amazing level of commitment.

What do they intend to do with all the frozen paserines?

What do they intend to do with all the frozen paserines?
Click to expand...

Believe it or not they'll almost certainly be eaten, either sold to a "restaurant" or for their own consumption. I can't imagine eating a Long-tailed Tit, it beggars belief. but it still goes one.

dragnil said:
Believe it or not they'll almost certainly be eaten, either sold to a "restaurant" or for their own consumption. I can't imagine eating a Long-tailed Tit, it beggars belief. but it still goes one.
Click to expand...

Incredible that such activities persist in the 'civilised' Western World where it is often the East which is perceived as being backward. It's nice for the Carabinieri to be getting some good press for a change, they're held in very low esteem by all the Italians I've ever met.

It really shines a light on the cultural differences which prevail across Europe and the obstacles they present to the EU.

This is just plain heart breaking to see all these dead wildlife.