Supporter
Work is a four-letter word, you should know better ;o)

Hoopoe in the village!

After 3 blank days and heavy cloud cover I got really excited when I saw reduced cloud cover and the potential for a biggy. I could see broken cover on the way down and flocks of Kites were building from Pibeste to Arrens. That's where the story ends - I drove up into the cloud and it stayed!!! What a nightmare. An occasional break produced birds so they were there but not in the numbers I hoped. Bearing in mind I saw in the region of 400 on the drive up a return of about 50 was poor.

I took some time to sniff around the tunnels, cliffs and plateau and very little in the way of small birds too! A group of 40 Serin but apart from that...

Ended the day with an Egyptian a coupe of Short Toed Eagles, Booted Eagle, some close ups of Griffons but not as I had hoped...

Had a short walk around the lake so pleased that I got out off the village! Started with the adult Woodchat and then 200 metres further on a spanking male Red Backed with two young. A Peregrine put in an appearance, I was expecting Hobby but Peregrine is a nice replacement.

There were a lot of Swallows and Martins as the cloud cover was fairly low.

Then a couple of common Redstarts and a super pretty Nightingale - don't usually see them! I plodded on to see a Spot Fly in the trees ahead and a Booted Eagle, light phase, overhead. Got excited with a green wood but I think it is a young virudis rather than a loose Spanish one...

Tried to get a few photos of Kestrels - always a chance (of misidentifying one!)

Supporter
Terrific! Let's hope they stick around ,- did the B,-s Kites breed near the airport?

Not sure - they were there and then not! Should find them around the perimeter though - maybe a Harrier or two....

Rock Sparows are onto second brood I think

Lac de Lourdes has had up to 10 TEN Purple Herons - two yesterday....

Great to see you again David (and Shirley)!!!! Girls will enjoy the Penguins...

Another trip to the lake and some more of the same Shrikes - The count was 2 young Woodchats (so as suspected last week) and three young Red Backs.

A field full of White Wagtails and two Yellow mixed in - one of which had a very high pitched call hmmm. One possible Ortolan - well it wasn't a Yellowhammer!

With blue skies it was difficult to pick up anything in the sky.

Pibeste had a lot of Griffons and then something bright reflecting in the sky - a male Harrier - so bright underneath! I think by process of elimination I have put it down as a Hen Harrier. The wings seemed blunt or rectangular where the only male Pallid I have had the wings seemed pointed - flying at distance that it - the bird was not much more than a speck even though bins and whilst I tried to get a record shot it was lost! I'm working on the basis that the blunt look is them being framed by the black tips...

Supporter
Thanks, it's great to be back in this wonderful area.
Started well with a glorious Short-toed Eagle. 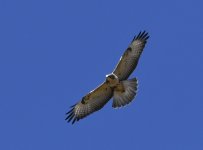 Supporter
How about Short-toed Buzzard? It's OK for you, I have to live with the StEagle authority of Whisby and my call of Buzzard (honestly) was threatened with a terrible fate. She's even talking of asking for the Garibaldi biscuits back... ;o)

At least we got to see some specks in the sky yesterday...

Nice morning up at Gavarnie this morning - set off pre-dawn for some silly reason!

The 'migrant' trap was full of birds still sleeping I guess but onwards and upwards. A constant hustle and bustle of the Water Pipits and not a lot else. I cracked on to the small lake and then a 40 minute walk. a funny Wheatear caught my eye - mainly because of the almost orange look to it. As far as I can see it's just a juv northern Wheatear.

Anyway, after a little pause at the top a Wallcreeper duly appeared, job done. There were two Alpine Accentors a little higher.

Dipper on the way back and then a flock of 40+ Griffons by the car - probably disappointed that I had made it back...

Another stop at the migrant trap revealed a young Melodious Warbler, Pied Flycatcher, Common Redstart and a couple of Rock Thrush.

Back in the car and a distant Lammergeier followed by a huge flock of House Martins with 2 Alpine swift above them.

Great morning and back at work at 11.

So to the group

A great start to the week with a short walk around a local lake. There were a few migrants and by few I mean almost dripping off the trees - Spotted and Pied Flycatchers, Common Redstarts and a skulking Wryneck on the deck around a tree and a bush. Stonechats, Whinchats, Wheatear, ST Treecreeper - all great stuff. Sadly no Shrikes! However, a nice Hoopoe showed along with a whitethroat. I love days where you think that anything can happen even if they don't!

Up to the migration point at the Soulor. WINDY and the wrong direction. Trying to find things was difficult and trying to identify then was also hard with birds morphing and changing names in front of our eyes! A mixture of different body, wing and tail positions coupled with awful light, a greyish cloud that was too bright to look into and also almost impossible to view definition or colour. Most bizarre and taxing conditions - even the 'pro's' were changing their calls!

Anyway, most fo the raptors started to show an appearance when the wind died a little - Marsh Harrier, Osprey, Griffons, Buzzards, Hobbys, Kestrels, Sparrowhawk, Black Kites (I clocked a very distant flock which I tried to count but got to 42 plus 8 and had to give up as way beyond range), Red Kite, Booted Eagle, Short Toed Eagle and finally 2 Lammys. Bird of the day was split between a cracking posing Crossbill or Black Stork overhead (doesn't have to be super rare).

A little potter round at the top didn't produce much extra, however, a trip to Pibeste, with Honey Buzzard en route, produced the goods with a coupe of Egyptians and Golden Eagles etc etc

Day 2, for me at least, was very disappointing. The target being the Wallcreeper that I had checked in on a couple of days earlier. The drive is bumpy and the walk is great albeit a little bit steep at the end. It's not the easiest 'tick' to not 'tick'.

The birds on the way fairly rewarding though and some compensation - a count of 6 RockThrush and a Spanish tagged Lammergeier (two Lammies in total) with supporting cast of Redstart, Water Pipits, Choughs, Wheatears and an amazing wall climbing Dipper but all in all a poor return when expectations were so high. The Dipper did a fantastic impression of a Wallcreeper as it climbed up the waterfalls vertical walls!

The return home was also a difficult affair - 'couldn't buy a bird'! Literally at least until had a smart Cuckoo impersonating a Roller, our first Black Shouldered Kites of the trip and two ringtails that disappeared in the haze of the airport. A Yellow Wagtail put in an appearance - where there is one there is more but that's later and finally to end the day a singular Rock Sparrow just as the heavens opened.

Weather reports led us to switch around a couple of the destinations, and covid tests for travellers, so off in search of the ringtails. The Yellow Wagtail turned into 17 so that was nice and was also a request of one guest.

Ringtails didn't show but a couple of Pipits? across a field hang on very sandy coloured. Almost not daring to call it I scrambled off in search of a clinching view. After a Benny Hill like chase around the fields we were rewarded with amazing views of 2 Tawny Pipits as they scurried around the stubble. A new bird for everyone but me...

A Black Shouldered Kite took a mouse in front of us and it was time to go.

Ayguelongue is a small lake near Pau and generally worth a visit. The water was extremely low though so a short walk required to get to the water. There were a handful of waders and ducks to tuck into and we were picking our way through - Common Sand, Little Stint, Green Sand, Greenshank, Wood Sand, Dunlin, Snipe, Reeve.... hang on a minute very bright underparts, hint of super, nicely marked back urrrr guys check this out PECTORAL! Turn to face me turn to face me!!!!!! Seen them but never found one myself - GREAT.

Also treated to a pair of Black Terns as they fished around the shallower water only to be trumped by an Osprey which was then mobbed by a BlackHeadedGull for his catch - talk about small dog syndrome! We relaxed with our picnic and glade of Rose as we watch it unfold in front of us.

An unnamed falcon - still very puzzling - Kestrel minus in size, flew like a Merlin but had a long tail, sharp pointy wings, very white underneath...

Another lake on the way home produced Reeve - complete contrast tot he bird we had seen earlier.

Bareges for the last day and the search for Citril Finch, blank, and Black Woodpecker - at least two callers and some glimpses. A sparkling Sparrowhawk. Then Goldcrest, always nice for us, Tits and a Hot Chocolate.

The trip up the Tourmalet was fairly uneventful barring a couple of trip ticks and then boom 3 Accentor on the roadside! This was great news for the non-walkers as it saved us about an hour and provided width of road stunning views.

Sadly, the trip was finished at midday (short dy today with check out and flights etc.) but we scraped past the 100 bird mark, left some out there but had a couple of great surprises. Birds do seem scarce - considering we were watching Woodchats into October last year!

Supporter
After my last embarrassing post, I hesitate to say more, but we spent 3 weeks on Rosbifs' local patch which has long been a favourite of ours. Birding seemed slower than usual but still very good in a beautiful area. We spent a morning with Charles, who picks up "Dots in the Sky" with ease and we succeeded with Lammergeier, a real StEagle and plenty more, any visitors needing a guide should contact him. Now to get through an English winter before our next spring
visit... 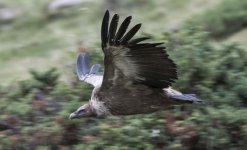