Cronus binoculars appeared around 5 years ago on the market. So it is not a current production.
In 2019 Athlon Optics has updated all their binoculars lineup to gen II, except the model Cronus 8.5x42, which was claimed as discontinued. So let’s check how it performs in 2020. 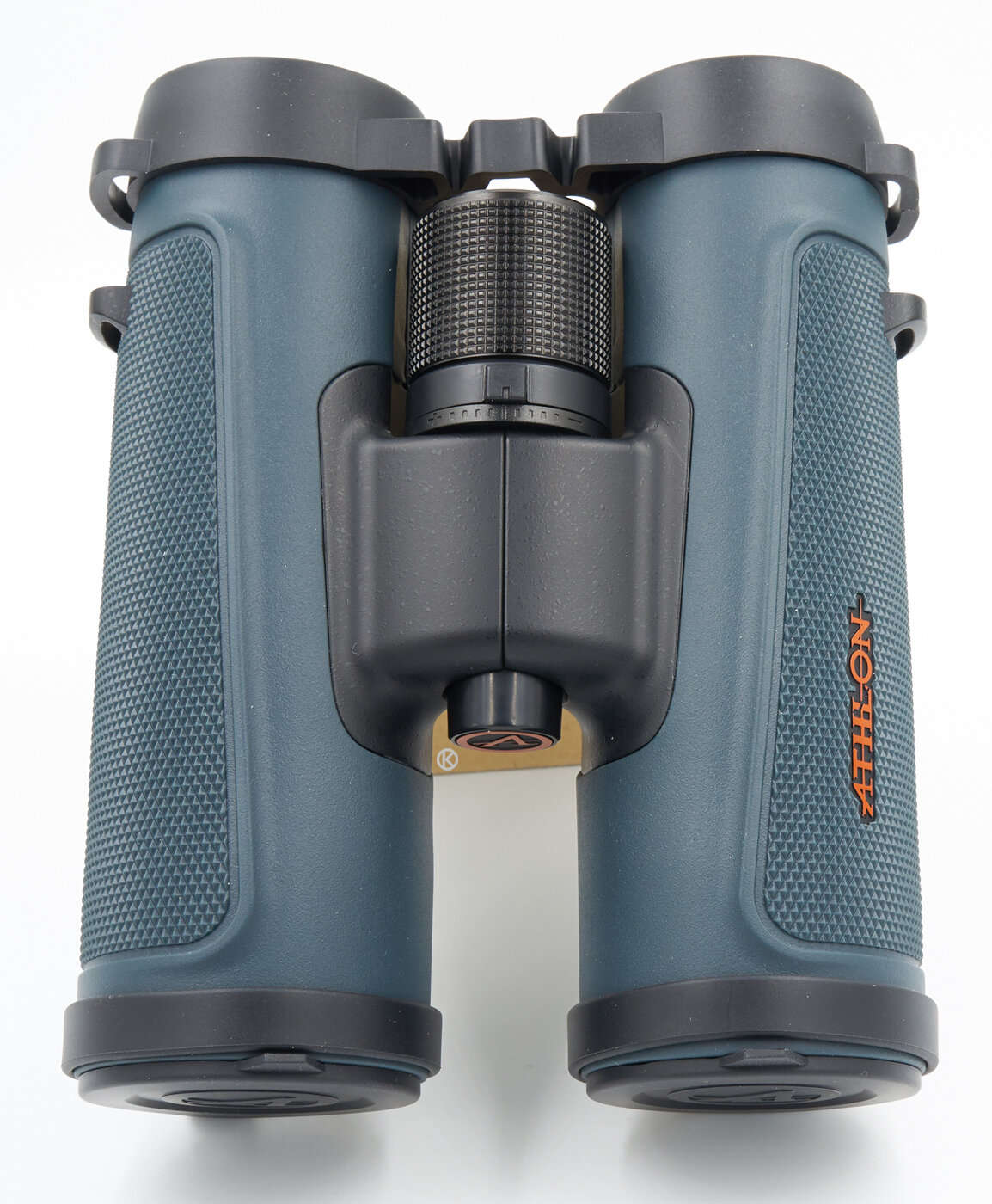 The Cronus is the middle or may be even big sized binoculars by nowadays standards: the length is around 160mm (6,3 inch) and the weight is 950gr ( 33,5oz). But it looks very solid in arms. The weight could be high because of the thick armor (around 2mm), cheap metal used and not optimized chassis. But thanks to thick armor, the binoculars do not chill hands in cold weather, which is ordinary in my location. Even the metal alloy on the central bridge looks warm. Materials and ergonomics are fine, but you’ll recognize the Chinese origin from the first look at the Cronus. Without having a look at the bottom side where is a label “Made in China” and something similar to serial number. 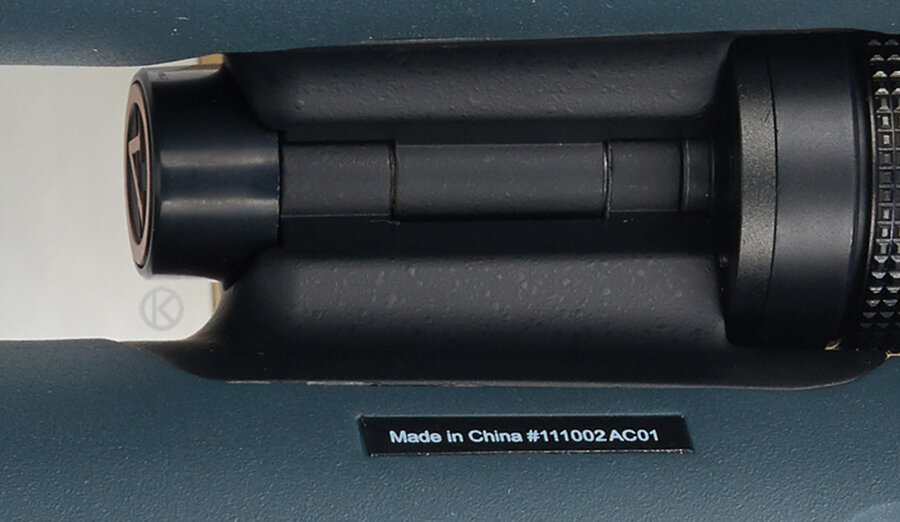 Some parts of binoculars look similar to the same parts of Zen-Ray or Saga binoculars. So the design is pure Chinese. 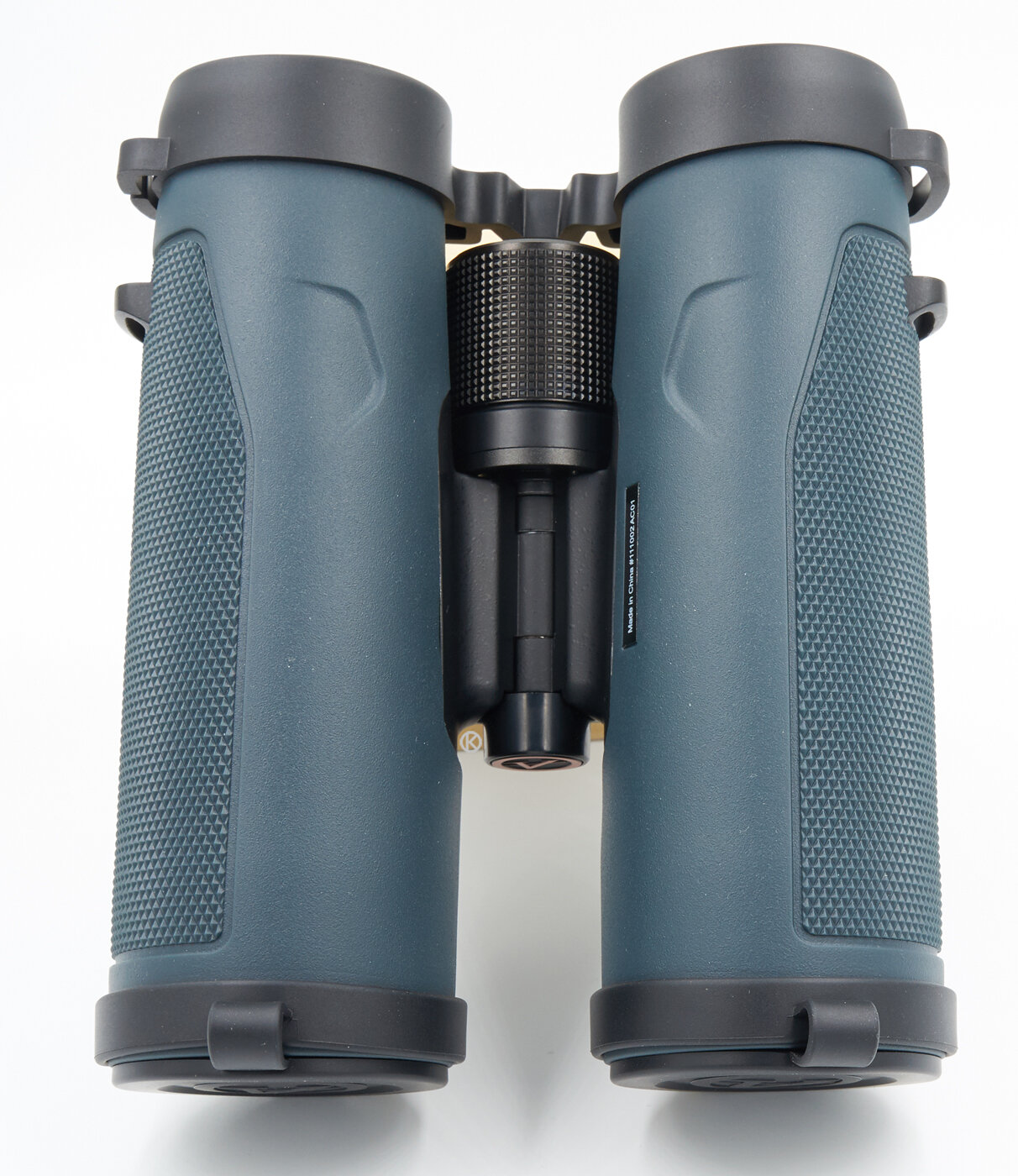 The first flaw of ergonomics imo is the cap, which closes the mount thread - right photo. It protuberates above the bottom side of the bridge (and so does the mount thread under it). The cap eats up space for fingers around barrels and is not smooth enough. I hold binoculars in my right hand during walking usually, and the whole weight presses at my middle finger. So the cap digs into my finger a little.

There is a much better solution for the cap in the GPO Spectra 8x42 - center photo. And the perfect solution in the Zeiss Conquest HD 10x32 (where the cap is in the plane of the bridge cover) - left photo.

I need to mention that in the gen II Cronus 10x42 the issue was solved. The mount thread cap is flat now. 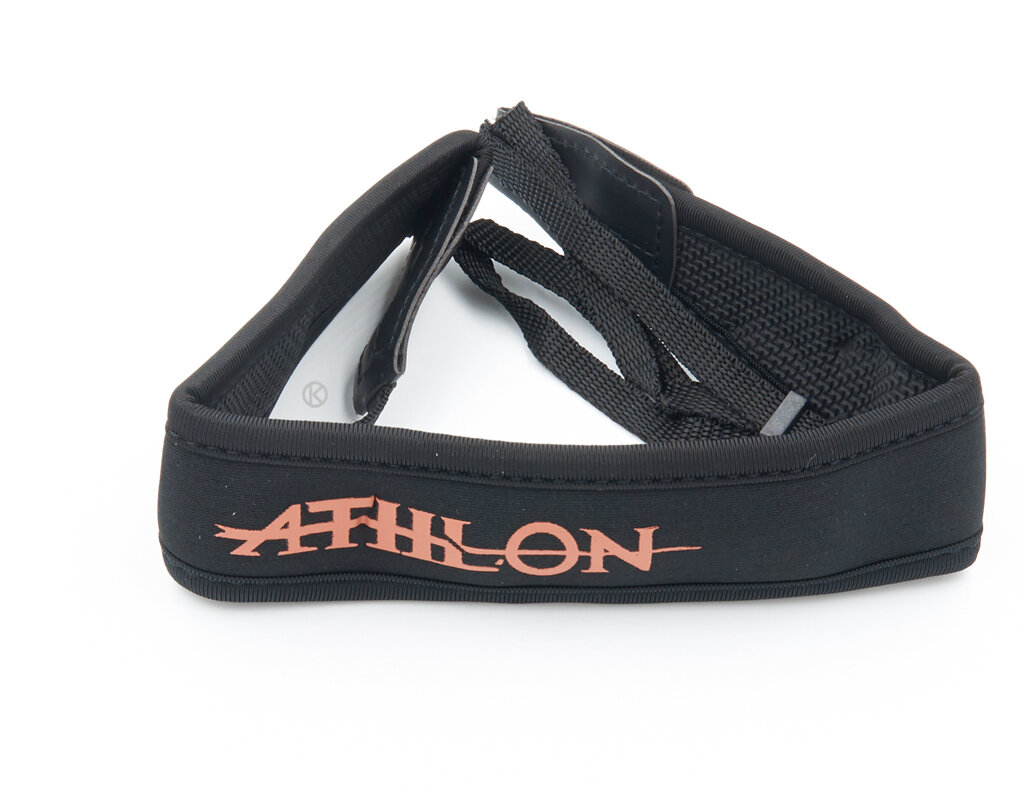 The neck strap is simple, has just 40mm of width. And is not elastic enough for the binoculars' weight. It works ok for 10-15 minutes walk, but for longer sessions i’d recommend replacing it with better (wider) ones (like the neck strap which is supplied with the GPO) or by Harness. 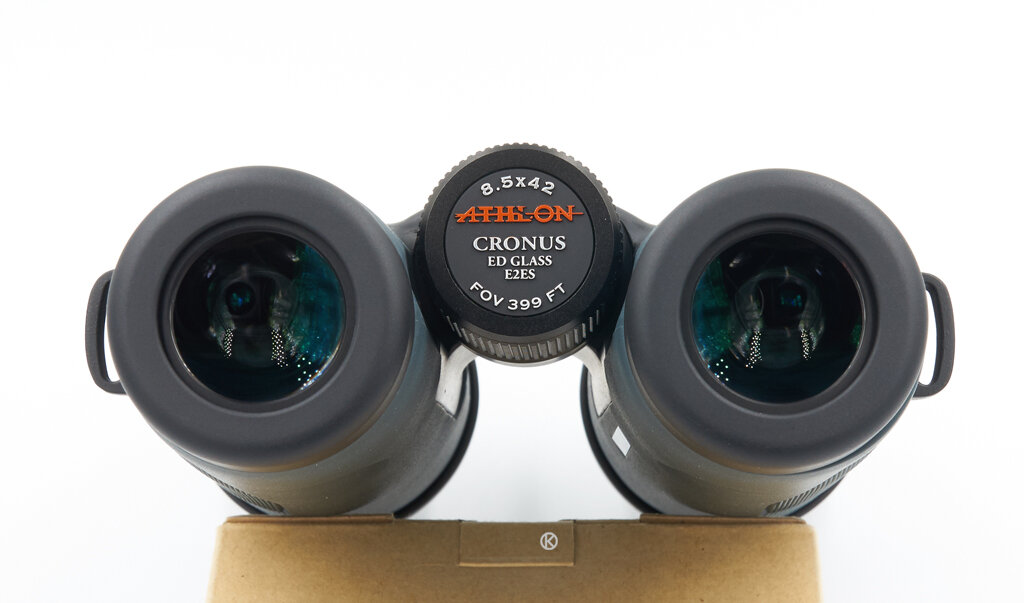 The focuser knob is big (28mm of height and 32mm in diameter), made of aluminium, and can be rotated with two fingers. The surface is slippery, especially when used in gloves. The stiffness of the focuser is average, maybe a little less. There is almost no free play.
It CCW to infinity, the full travel is around 370 degrees, quite fast. The close focus is 2m (6,5 ft), from it to 15m (16,5yd) distance is 270 degrees of focus travel, then 40 degrees towards 300m (328yd). And 60 degrees of focus travel left. When focused on infinity i can observe up to 70 meters ahead.

The IPD is 57-71mm. Barrels movement inward and onward is stiff. 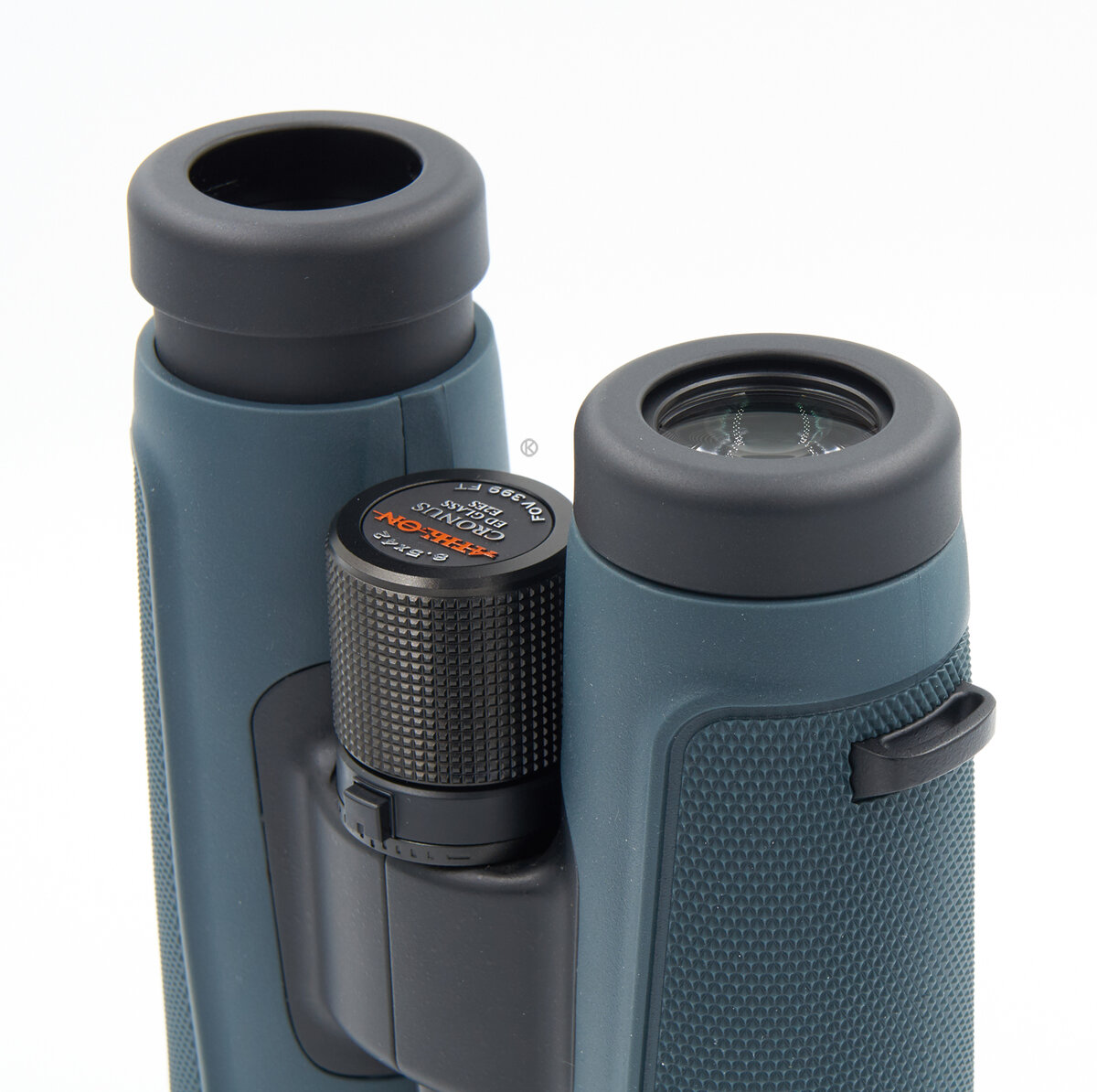 The eye cups are made of plastic. They have the outer diameter (which touches the nose) of 44,5mm, middle diameter (which touches eyebrows) of 39mm and inner diameter of 29mm. The top surface is flat.
And here we have the second ergonomics flaw: eye cups have just 1 step out, without an intermediate stop. They can be collapsed for observing with glasses (i can see the whole field of view) and fully extended. There is some tension during stepping out (rotating out actually), but not a stop.
I measured the eye relief from the eye lens at 18mm. Very impressive, but the opposite side of this is high spherical aberration of the exit pupil. The eye lens is recessed around 5mm inside the eye cup. So the available eye relief can be:13 - 3мм depending on the eye cup position. 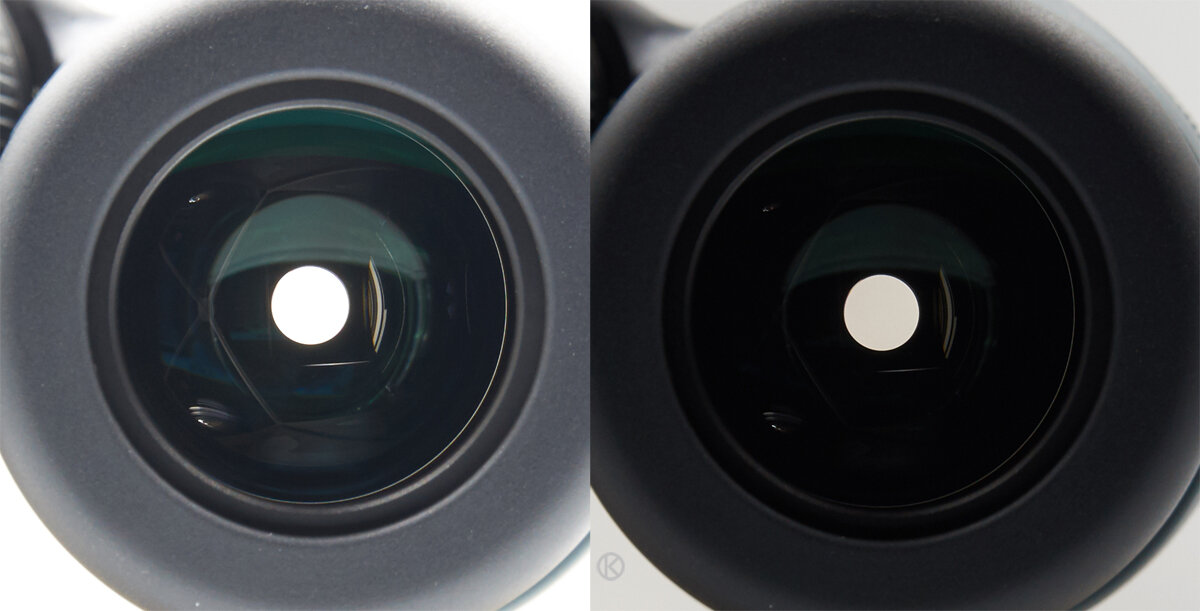 Exit pupil is almost round, and has 4,7mm of diameter. 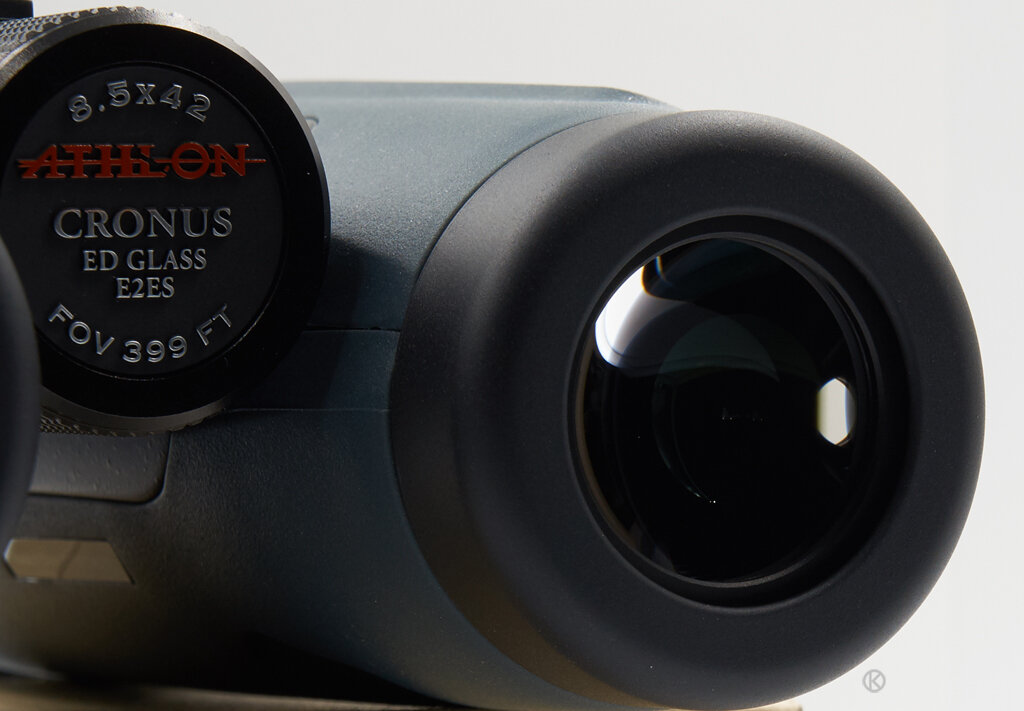 The inner diameter of objective threads looks like 41mm, and i measured the effective aperture much less - at 39mm only. So the magnification could be 39/4,7=8,3x.
Does this extra 0,3x of the mag count? Yes, it does. I can see a little closer with more details, than in 8x binoculars. I usually prefer 10x binoculars for birding, but have to admit that 8,5x binoculars could do this job almost as well and with a wider field of view and less shaking. The bigger size of the Cronus compensates for extra mag and the view is with the same stability as in 8x smaller binoculars. The Cronus can fill the gap between the wide view 6-7x binoculars and big 10x ones nicely.

The first lens of objectives are recessed for 11mm inside the tube. There is some baffle thread before and behind it. The objective design is a triplet (3 lenses in 2 groups): a singlet + a doublet (+ focus lens). The coatings are mostly with typical green (and blue) colors and average intensity. But all the reflections of light inside are colored, which confirms the FMC.
The light transmission is comparable to the Spectra, so could be around 85-87%. 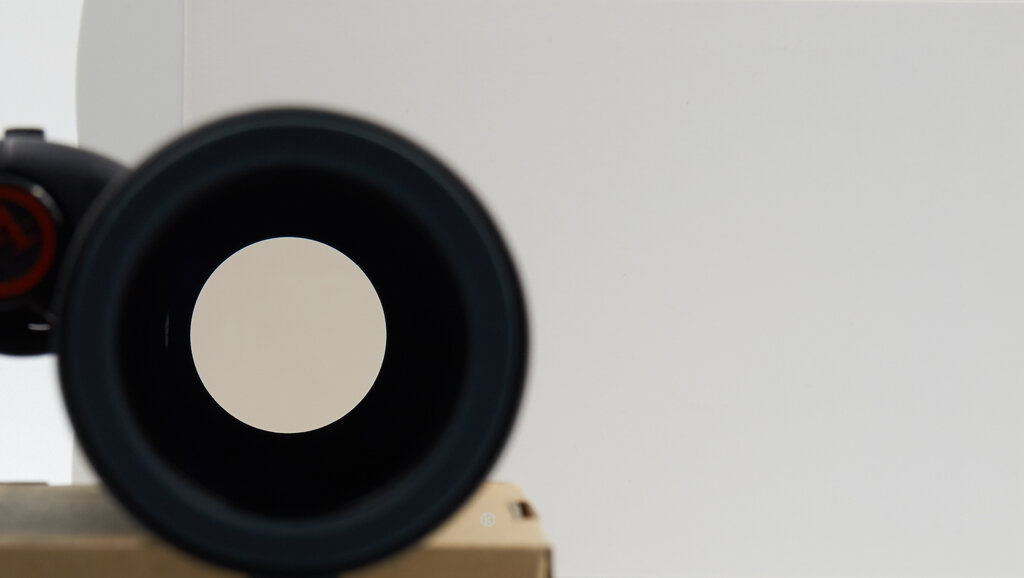 The Cronus has slight warm color reproduction: warmer than the Zeiss Conquest HD 10x32 has, and noticeably (for me) warmer than the GPO Spectra 8x42. But the warm bias is a little noticeable during sunny days, and could be detected during cloudy days or by clouds. Because of the small warm hint the contract looks better in the Cronus than in the Spectra. The Cronus has better macro contrast: all details and color borders are easily seen in it, while the Spectra is a little sharper on axis (has better micro contrast).
The apparent brightness of the image in the Cronus is average because of the warm hint, small prisms used (looks similar to prisms size in the Conquest HD 10x32) and 100% vignetting of the edges of the field of view.
Flare suppression is average too: there is small veiling glare when observing in the Sun direction, lower 1/8 - 1/10 part of the view is glared. But the other part of the view stays with good contrast and colors saturation. Colors are vivid enough, the view is good.

Assuming all above the Cronus could be just ordinary binoculars of the $200-300 price tag. But there are two features which make it stand out.

The first feature is Chromatic Aberration correction, which is good on axis, really good. Better than in the Vanguard Endeavor ED IV 8x42, the GPO Spectra 8x42 or in the Zeiss Conquest HD 10x32. You will hardly see CA on axis over a bird’s silhouette in the bright sky. Or against tree branches towards the Sun direction.
A sloppy placement of the exit pupil, of course, increases the level of CA. And on the 30% of the distance from the center to edges CA becomes visible. It increases towards edges, where it has a medium or may be a little higher level. Around three times higher, than at 30% distance. Level of CA on the edges is comparable to CA level of the Conquest HD 10x32. Fringing has the same colors in the Cronus as in the Conquest HD. And quite noticeable for me. But If you are not sensible for CA, you won’t notice it in the Cronus.

The second feature is a field flattener, which is used in the ocular construction. This is something very unusual for the middle price (or even budget) binoculars. Do you know other examples?
The field of view is corrected in a good way: correction is better, than in the Conquest HD 10x32. On sunny days you won’t notice any softness outward. Though on precise testing with a booster i can see that the image degradation starts from the center and grows slowly towards the edges. The worst picture is at 70% of radius, then becomes better towards edges, but not as good as on axis.
On a dull day some softness could be noticed around 70% of radius. Which looks like a tor (a figure) of a little unsharp image. During stargazing the field of the view is full of almost pin-point stars from edge to edge! Beautiful view. Stars stay pin-point all over the field of the view, they are not distorted into comets or nebulas. Only the brightest ones (higher 1.5 mag) deform a little on panning.

The Cronus also has a flat field design. It has low 3D, noticeably lower than in the Spectra.
This is because of a low distortion level, even lower than the Conquest HD has. Straight lines stay straight over the field of view.
The form of the distortion is not constant over the field of view though. It’s negative on axis, then positive at 70% of radius, then again negative on the edges. So there is a very small Rolling Balls effect, but it does not bother me, while i’m sensitive to it(. Panning is comfortable in the Cronus, what i can’t say about the Fujinon FMT 7x50: i have strong RB effect using it and almost can’t use it during day time.

To summarize, the Cronus 8.5x42 UHD is still a good pair of binoculars, especially for the current price at Amazon or AliExpress.

I don't see why i can't insert images in the post. They look like links instead. Can someone advise on this please?
Looks like the feature was disabled at the forum.
Last edited: Oct 22, 2020
P

I was thinking about buying one to use as a loaner, and to keep in the truck. A retailer here in the US lists the ER as 21mm which works great for me, and they are now only $269. Since you measured a different amount, I will have to re-think this.
Last edited: Oct 23, 2020
D

The Cronus has plenty of eye relief, it will suit everyone. Even with sunglasses i can see the whole field of the view.
G

I was thinking about buying one to use as a loaner, and to keep in the truck. A retailer here in the US lists the ER as 21mm which works great for me, and they are now only $269. Since you measured a different amount, I will have to re-think this.
Click to expand...

dae33 said:
The Cronus has plenty of eye relief, it will suit everyone. Even with sunglasses i can see the whole field of the view.
Click to expand...

The 18mm you measured is not enough for me. I often wear shield-type sunglasses, such as what bicyclists are often seen wearing.