Slowly working through my catch from the weekend - will start off with the "by catch" so apologies for the non moth photos here but it is all part of the experience but if people would rather not see them please let me know and I will stick to the moths only.
The beetle is Apomecyna histrio (Cermabycidae) which I have caught on TI in the past but always nice to see.
The two spiders are both species of Huntsman and were within a couple of metres of each other on the same tree the first (0082) is a Heteropoda species and the second (0084) is probably a Yiinthi species but there are so many undescribed species up here that without an expert seeing them in the hand no real chance of getting an ID.
Finally my constant companion through the session this lovely White-lipped Tree Frog - the worlds largest true tree frog I believe. he was not very talktavie but certainly helped himself to a fair few moths!

Now for a few moths. These two were both new to me and I think to the Cape.
Barantola pulcherrima (Gelechioidea, Depressariidae) - this did a Common Sandpiper imitation and was constantly bouncing up and down as it hung around on the sheet
Dactylioglypha tonica (Tortricidae, Olethreutinae) - a distinctive Tort that seems to be rarely recorded.

I managed to get out twice over the weekend - although it turned out to be a very expensive one as whilst looking for Mantids for a friends Masters, I managed to loose my phone....It was notably quieter than the weekend before but there was still plenty of interest. Very little trapping has been done on the western Cape an what has been is predominantly from the Wet so many of these Dry season moths are new to the area.
Doratifera quadriguttata (Limacodidae) - there are two virtually identical Doratifera species in Australi, most easily seperated when caterpillars or by location. This is quadriguttata as the other species has a southern distribution.
Eloas atmodes (Limacodidae) - a variable but common moth on the Cape. There were several of these on the sheet both nights I was out
Eloasa bombycoides (Limacodidae) a species that I caught regularly on TI but have not seen it here before
Hestiochora xanthocoma (Zygaenidae, Procridinae) the first I have seen for a few weeks, possibly a second emergence.
Pseudoclania (Psychidae) - probably an undescribed Pseudoclania, will be examined by a friend who is reviewing the Australian members of this family

Laelia furva (Erebidae, Lymantriinae) - there are virtually identical two Laelia species in Aus. The easiest way to separate them is by leg colour. In obsoleta all the legs are ochreous but in furva only the anterior pair is. Furva is restricted to the top quarter of the Cape
Lissomma ANIC 2 (Geometridae, Oenochrominae) - this is one of several undescribed species
Lithilaria melanostrotum (Erebidae, Herminiinae) - a regular visitor to my sheet here in Weipa
Neodiphthera excavus (Saturnidae) - a new species for me, two appeared on the sheet over the weekend
Pinara divisa (Lasiocampinae) - this appears to be a new species for the Cape but the Pinara.
Wingia aurata (Oecophoridae, Oecophorinae) - another potentially new species for the Cape.

Not the most stunning of moths but these two Acentropinae have taken a bit of tracking down, both are new species for me.
Eoophyla argyrilinale - I can only find a single modern record from 1981.
Margarosticha ANIC 3 - only known from three specimens taken at the top of Cape York in 92 & 93

Guys
Great thread, I must say.
A good few years ago, when I lived in Qld., I was visited one night by this beautiful moth.
The best ID I could come up with was Opodiphthera fervida, but have never been sure.
Can you confirm or ID correctly?
TIA
Fof 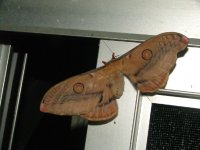 IamFof said:
Guys
Great thread, I must say.
A good few years ago, when I lived in Qld., I was visited one night by this beautiful moth.
The best ID I could come up with was Opodiphthera fervida, but have never been sure.
Can you confirm or ID correctly?
TIA
Fof
View attachment 1406146
Click to expand...

Hi, right genus this is Opodiphthera eucalypti...well thats what it is called at the moment but the monograph on Australian Saturniidae is being written and the genera being reviewed so that may change

Thanks, Atropos.
I've always had a gut feeling that I had the spp wrong.

Atropos said:
Not the most stunning of moths but these two Acentropinae have taken a bit of tracking down, both are new species for me.
Eoophyla argyrilinale - I can only find a single modern record from 1981.
Margarosticha ANIC 3 - only known from three specimens taken at the top of Cape York in 92 & 93
Click to expand...

Obviously related to our Chinamark species.
A

Absolutely, I catch a few of the same genera as in the UK but none of the same species as far as I know
A

Managed to get out for a couple of hours on Sunday night as it was overcast and the wind had dropped. Unfortunately by 9.30 the wind had got up, driven the clouds away so the moon was bright but slightly more disturbing it was raining ash so I felt discretion was the better part of valour and retreated as wasn't sure where the fire was. Still working on the photos but there were several new species for my patch
Acrodipsas melania (Lycaenidae) - this particular Acrodipsas is only known from Cape York and is more normally associated with hilltops (Weipa is very flat) so the specimen is going to be checked just in case this is not melania.
Epidesmia reservata (Geometridae, Epidesmiinae) - I am still double checking this one as there are a few very similar species in this genus but a new species for me
Hamodes propitia (Erebidae, Erebinae, Catocalini) - this was regular around Cairns but I have not seen one for several years. Apparently this species does have a patchy distribution, a friend who has trapped in HK for 20+ years has had 6 this year which is more than he caught in the preceding 20
Hednota bifractellus (Crambidae, Crambinae) - a new species for me
Gracillariidae - an unknown Gracillariidae, possibly an Epicephala species but I will need to retain and send down to ANIC to get an ID. As far as I can tell does not match anything on the Aussie list but not all species are illustrated.
Sorolopha cyclotoma (Tortricidae, Olethreutinae) - an occasional visitor when I lived in Cairns but the first for a few years
Synclera sp A (Crambidae, Spilomelinae) - one of the many known unknowns that has not been formally described. A regular visitor to my traps in the Cairns region and a rare visitor to the NT and TI.
Driving out to the bright lights of Cairns for a few days so wont be trapping now till after the weekend.

Always helpful when you look in the wrong family. When I caught these my initial thoughts were that they were some sort of Cossidae and having trawled through whatever resources I could find I sent the photos to Axel Kailles for his opinion...turns out they are actually Trigonocyttara (Psychidae)! The only described species on the Australian list is Trigonocyttara clandestina which has not been recorded north of Stanthorpe right on the Queensland / New South Wales border a mere 2625km south of me, so this is either a massive range expansion or a new species, also the first recent record for Qld as the records from Stanthorpe are from 1930. These will head off to a friend who is currently reviewing Australian Psychidae for closer examination.

This is, as far as I can tell, the first photo of a live Auchmophoba tynnuta (Crambidae, Spilomelinae) to be published. I can only find three existing photos of set specimens. One on BOLD caught by the late Ian Common (the guru of Australian moths) in 1968 and two from the ANIC Image Library that have no data associated with them which is very frustrating. It is a regular visitor on the sheet but has taken me several weeks to track down, this particular individual was photographed on 19th September

Back from my quick trip into Cairns and managed to get out for a couple of hours last night (will hopefully get out again over the weekend)
A few highlights but I am only just starting to edit the photos
Eumeta variegata (Psychidae) - my first for the Cape, have reared it from TI and I suspect that they are widespread in the area but nice to catch one
Hamodes propitia (Eerbidae, Erebinae) - my second individual this month and a much fresher one
Opodiphthera eucalypti (Saturniidae) - my second individual this season
Pinara cana (Lasiocampidae) - my first record for the Cape of this more southern species, there is another record from slightly further north from June this year.

A couple of the non moth highlights - two species of Phasmidae appeared on the sheet. The first is Xeroderus kirbyi a rarely recorded species with few photos of live specimens and an undescribed Phasmatini. There are only six other records of this and as yet it has not even been confirmed which genus this is.

I wasn't completely happy with the ID of the Opodiphthera that I caught so I sent the photos off to the gentleman writing the monograph on Australian Saturniidae. He responded last night and is not sure what my specimen is but in his words there is a strong possibility of it being a new species. He will be borrowing the specimen for closer inspection once it has been set.

Grrr out tonight and generator packs up...OK it is nearly 20 years old but has been regularly serviced, atleast once per year. Even more frustrating was in Cairns last weekend so could have bought a replacement there rather than have to pay Weipa prices. Will take it to the mechanics on Tuesday (long weekend here) and see if it is s9mething simple. Will post s9me moth photos tomorrow as was a good start to the night before had to pack up
A

Managed to do some running repairs on the genny on Sunday and got it working again for last night - only stayed out for a few hours just to see if it over heated or stopped, it sounded rough but kept going so I shall take it to the mechanics to be serviced tomorrow and hopefully wont be as bad as I felt. In between my technical issues managed to find some great moths (still working through the photos so will be more to come over time) the undoubted highlight of the night was this stunning Comana multigramma (Limacodidae), only the second record that i can find for this with the first being from Kakadu in April 2009

An Englishman in New York