Average day with one exception (1 Viewer)

I see all of these birds pretty much every day this time of year, sometimes I wont see the Pileated or Black Vulture for a little while. There are a few others I see often but didnt glimpse today (Eastern Phoebe, Canada Goose, Hooded Merganser, Common Raven, Red-tailed Hawk, Hairy Woodpecker, Northern Flicker). But what made today special wasn't a specific bird, but what I saw a few birds doing...
I went out with binoculars and a scope for about an hour, around 3pm, and went looking for a Golden Crowned Kinglet I've seen a few times lately plus whatever else might turn up. We've had snow on the ground for a couple days now so birds' patterns have changed a bit. I watched some Northern Cardinals and Song Sparrows for a while but didn't see the Kinglet. It started getting cold and I needed to get dinner going so I walked back to the house but as I was coming through the small woodlot near my back yard something caught my eye; an Eastern Bluebird... But what was it doing? We have a small flock that are here year-round; I see them most days, often cruising the edges of the woods or pond, or along the fences. I had only caught a quick glimpse of one or two so far today. When I looked closely I could see that there were several of them, huddled together between two branches. They appeared to be happy in that position, so I quickly set up the scope and tried to get my phone lined up for a quick photo. Two or three of them flew off while I was lining up the shot but I managed to get this picture of four of them stuffed in there together: 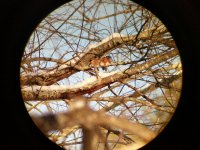 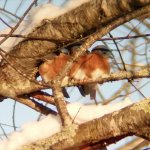 They always make me happy, and especially so today.
Cheers
Daniel

H
Birding in and near Nashville, TN
2

My First Ever Birding Day