Bamba to Zarda - the legacy of Gregory Mathews. (1 Viewer)

G. William Stalker (1879 - 1910). Started collecting for the British Museum (Natural History) while prospecting for gold on Mambare River, New Guinea; 1905 sent to Alexandra Station in Northern Territory; 1907 went to Inkerman Station, South of Townsville. He was drowned on 9 Jan. 1910 while a member of the British Ornithologists' Union Expedition for Exploration of Central New Guinea.

In the book The Bird Collectors, by the normally very trustworthy couple, Barbara Mearns & Richard Mearns (1998), we find: "... the death of William Stalker, an Australian member of the British Ornithologists' Union (BOU) Jubilee Expedition to New Guinea in 1910, for his body was found in a muddy creek ..."

Thereby, it looks like James is correct and Mathews (himself) got it wrong! However, if nothing else, an added "G."

But beware, regarding all those stalkeri birds, according to LeCroy 2011 (here) apparently there's a Wilfred Stalker to consider! He (also?) collected for Mathews.

It all looks a bit "messy". I guess it might be worth the trouble checking (all) the stalkeri birds ... ?

Either way, it will not be done by me. At least not for now. I´m off to work.

Administration of the estate of Wilfred STALKER of Loughrigg House, Ambleside in the County of Westmorland, Naturalist, who died 10th of January 1910 at South West Dutch New Guinea, a bachelor.
Letters of administration granted at Carlisle 25 Apr 1910 to Wilfred STALKER of Ambleside aforesaid, cabinet maker the natural and lawful father.
Sureties: George GATEY, solicitor and Edward TYSON, bookkeeper both of Ambleside.
Gross value of estate £692.11.8
Net value of personal estate: £692.11.8
So an English naturalist who died on the 10th. No William.
http://freepages.rootsweb.com/~enzedders/misc/westmorland/ssurnames.htm .

Welcome to BirdForum and the Bird Name Etymology Subforum, "Jack23"!

This said without knowing if your comment was either ironic alt. sarcastic, or not ..? (I didn't deliver much, in post #21, I simply noted a case of what seems like some sort of confusion, different claims/names, etc.).

However, just to be on the safe side, I had a quick look at the three valid (full) species with the name stalkeri (none of them coined by Mathews):

• Bicoloured White-eye Tephrozosterops stalkeri OGILVIE-GRANT 1910 (i.e. 16th of March 1910, here), as "Tephras stalkeri", a k a Rufescent Dark-eye/Ibon, Ceram/Kakopi/Karopi White-eye and/or Stalker's White-eye: "... from a collection of birds made by the late Mr. Wilfred Stalker ..."

And also:
• the debated, no longer valid, Figbird (possibly simply a subspecific hybrid) "Sphecotheres stalkeri" INGRAM 1908 (here) a k a Ingram's Figbird (from Queensland, Australia); no dedication, nor any explanation.

Either way; the former three were clearly dedicated to a "Wilfred Stalker", who apparently did drown/died in the very beginning of 1910.

The other ones, described by Mathews, today considered either subspecies or invalid names (alt. synonyms), I gladly leave to anyone else. LeCroy's papers (see #21) does talk in favour of Wilfred, maybe Mathews only knew him as "Bill", and took it for granted his name ought to be William? Just a guess ...

I don't know what to believe.

To me this looks like a case when some crucial data suddenly appeared, in about 2010, (but what that would be is unknown to me). Maybe someone had found a Record of Birth, or a similar document. Possibly someone, somewhere, had dug into this topic (and this guy), and had written a Paper/Thesis ... ? Or did everyone simply followed what (the usually very trustworthy) Mary LeCroy wrote (without questions asked)?

PS. Maybe the safest way is to do like they did in the Avicultural Magazine (2011), here, where they wrote his name as: "Wilfred (or William) Stalker" ...

I´m sure glad he's not one of "my guys". None of those birds have an eponymical Common/vernacular name in Swedish.

I am as certain as I can be that Mathews collector is Wilfred Stalker, Uncle of Wilfred, son of Wilfred who was the son of Wilfred. There is no G. in their name.

He inherited what would have been a great deal of money from his prosperous family. In the 1901 census, he was listed as a joiner's apprentice (to his father) but by Aug 1902 he is on a boat to Australia calling himself a scientist (attached).

Loughrigg House, Ambleside is still in the extended family. And very nice it is too: 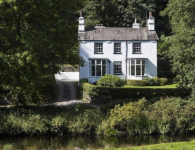