Birding in and around Tarifa, Cadiz, Spain (1 Viewer)

Barred Wobbler said:
That's about the level of expectation. They are reported every year, but often only single birds and only once or twice, before they vanish again. Very hit and miss. Right place, right time.
Click to expand...

Thanks a lot! Its very useful to know what is likely and what is not!

Do you have approximate dates? I might be able to meet with you and provide some transport!

The first flock of bee-eaters for this Autumn have just flown over my house.
M

Covid permitting, I will be in Tarifa 8th-12th September for a short visit with family. The 8th and 12th are travelling days. I have guided trips booked for 9th and 10th. On the 11th I plan to explore Tarifa on foot (its my first time in the area). So I won't require transport, but thank you for your kind offer!

A good thing that you won't need transport, as those are the days that I can't manage!!! Enjoy the trip.
M

gerald762 said:
A good thing that you won't need transport, as those are the days that I can't manage!!! Enjoy the trip.
Click to expand...

Thank you! Do you know whether Black Wheatear can be seen in Tarifa?

I don't know for certain, but I think it is very likely. I have seen them at my house, which 40 kms north of Tarifa.

You'll be most unlikely to see black wheatears in Tarifa. Wrong habitat. They are birds of bare rocky slopes and are only in low numbers in Cadiz province, with more in Malaga due to the more mountainous nature of the inland areas. The Sierra de las Nieves (Malaga), south of Ronda is a good place for them as is Sierra de Grazalema (Cadiz), but these are well north. The only place in Andalucia where I've seen them down to sea level is at the opposite end of the region, in Almeria, specifically the area around Cabo de Gata, where they are easy to spot around the lighthouse or in such coastal villages as San Jose.

I had a senior moment and confused Black wheaters with somthing else!! I withdraw my previous comment!
S

Just checked my notes for my only autumn trip to Tarifa area, back in 2008, and we were still seeing 50+ Bee-eaters as late as September 19th.

You probably did the same as I do, Gerald. Countless times I've told somebody about a bird. My brain says 'black redstart', then my mouth says 'black wheatear'.

It's raised some eyebrows in the past, when the bird in question was bobbing about in Northumberland.
M

Thanks for all the excellent info!

I used to see Black Wheatear in Casares. It's also common in Grazalema. And Black Redstart

47000 black kites through there in the 7 days to yesterday. 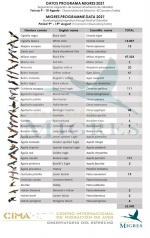 Just caught up with this post. I see you've had some excellent advice from Tarifa regulars already covering several sites I too would have mentioned. PM me with your email address and I'll send you my birding guide to Cadiz which should give you plenty of ideas (unless you've already got it as I vaguely recall getting a similar request a while back but the name of my correspondent escapes me), John
M

Just thought I'd give an update. I am back in the UK now. I had a fantastic trip; saw 119 species in 3 days, including plenty of lifers! Highlights were White-headed and Marbled Ducks, a roosting Red-necked Nightjar, Black-winged Kite and of course all the migrating eagles, vultures and storks! Also, I tried for the Common Bulbul on my final morning and was successful

I have a question: In addition to lots of Cory's Shearwater, I saw several much smaller Shearwaters that I couldn't positively ID. Are there any likely candidates other than Balearic? Or can I just assume Balearic?

Also, I would appreciate opinions on the ID of the birds in the following photographs (I have a pretty good idea, but would like a second opinion):