Andrew Whitehouse said:
It's a while since I've posted, so I should update things over the last week. It perhaps goes without saying that the weather has been pretty bad since the middle of the week and it's not really been possible to get out every day.

Tuesday 2nd: A wander along the River Dee was largely uneventful but there was a flock 15 Siskins near the boat club. There was also a colour-ringed Black-headed Gull. After reporting it I found that it was ringed in northern Germany in 2013 and seems to return to this area every winter.

Wednesday 3rd: A windblown headland produced very little except for a Stonechat.

Saturday 6th: Very hard work around St Fittick's. Two Snipe and 14 Curlew about the best of it.

Sunday 7th: The weather was a bit better today, although there were still regular snow showers, leaving us with a fair covering by the end of the day. It was very cold. Birds were clearly moving. At St Fittick's a group of eight Fieldfares came in off the sea and settled by the marsh, before reappearing later on Tullos Hill. Five Redwings were also about. A Woodcock was flushed from the scrub north of the marsh. Six Meadow Pipits were probably recent arrivals too. Two Great Spotted Woodpeckers appeared together briefly - I think the first time I've ever seen two at the same time here. Also breaking new ground were a patch-record group of eight Stock Doves on Tullos Hill. Other stuff include two Teal, two Water Rails and six Snipe.

The headland was pretty windblown. My first Kestrel of the year was flying around the golf course. A male Stonechat was on the golf course near Greyhope Bay along with eight Skylarks. Another Woodcock came in off the sea and hurtled over towards Walker Park, persued by a crow.

The Water Rail photos are still a work in progress.
Click to expand...

You went out in this?! 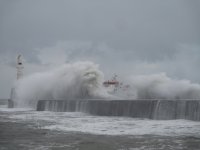 Looks like you were out there too! I was out for a short time this afternoon in the snowfields of Torry. Six Redwings and two Fieldfares appeared around the headland. I'm sure more must have been elsewhere. They're certainly moving around at the moment.
C

Andrew Whitehouse said:
Looks like you were out there too! I was out for a short time this afternoon in the snowfields of Torry. Six Redwings and two Fieldfares appeared around the headland. I'm sure more must have been elsewhere. They're certainly moving around at the moment.
Click to expand...

I'm Australian. We don't understand water in its solid form (unless in a G&T). My Scotsman can cope with wind and snow but he rarely takes a picture.
Redwing in the garden today fighting all the regulars. Black cap doesn't trust the new snow-proof feeder yet.

I had a pleasant wander around St Fittick's today, in fine weather despite the inch or two of snow lying. A flock of 25 Pink-footed Geese flew over the flat before I set out. Along Victoria Road, thrushes were soon in evidence and a Treecreeper appeared opposite the bowling green. There was a fair amount of activity in the scrub and marsh. Two Woodcock were flushed and seven Snipe were in the wetland. A flock of at least 40 Siskins flew around. Other counts included a Fieldfare, 20 Redwing and six Teal. Water Rails were again conspicuous, with five seen together from the concrete bridge and a really showy bird at the main wetland (see below).

Super shots,Andrew.I'm very envious,as I usually only see the backside of them heading Into the reeds..!

Some interesting weather lately. Thursday followed the coldest night for a decade. I had a stroll along the river, in fine but chilly conditions. Four Goldeneye were the best of it on the water. 85 Pink-footed Geese went over. Thrushes include eight Fieldfare and four Redwings.

Things were greyer and more turbulent on Friday afternoon for a walk around the headland. It wasn't too eventful but a Mistle Thrush was hopping about along the east end of Abbey Road.

Today was still breezy but occasionally with some sun. The St Fittick's area was interesting, despite most of the water in the wetland being frozen. Wandering about the bushy areas flushed five Woodcock and seven Snipe were also seen, mostly along the burn. One of the Woodcock was briefly seen scuttling about under some conifers. The highlight was a fantastic view of a Jack Snipe in the reedbed, from the concrete bridge. It actually flushed as I arrived but then flew round and landed back in front of me, just a few metres away. It then crouched down, nervous and still, among the vegetation. As good a view as I've ever had here.

Other birds about included at least nine Teal, a Great Spotted Woodpecker and three Water Rails. Thrushes were conspicuous, mostly around the gardens in Torry. Totals included nine Redwing and two Fieldfares. Two Mistle Thrushes on the beach in Greyhope Bay in the afternoon were a strange sight.

The weather was pretty rough today, but the rain held off late morning and I had a wander around St Fittick's. I wasn't sure if the Jack Snipe would still be in the reedbed, but I soon picked it out with the thermal imager. Today it was on the bank near the bridge, just a few metres away. I was able to approach it carefully and it stayed put. The views were absolutely astonishing. It's quite something to have these delicate birds freezing to the ground almost at your feet.

Wow.Fantastic photos,Andrew and well deserved for going out In such conditions.
C

Andrew Whitehouse said:
The weather was pretty rough today, but the rain held off late morning and I had a wander around St Fittick's. I wasn't sure if the Jack Snipe would still be in the reedbed, but I soon picked it out with the thermal imager. Today it was on the bank near the bridge, just a few metres away. I was able to approach it carefully and it stayed put. The views were absolutely astonishing. It's quite something to have these delicate birds freezing to the ground almost at your feet.

The thaw has really set in now, with not much ice and snow remaining. The birds were busy this afternoon when I had a wander round St Fittick's. Some of the hard weather arrivals seemed to have departed, with no snipe of either species seen. Four Woodcock were still about and there were also eight Redwings, a Great Spotted Woodpecker and a Water Rail. 14 Teal was quite a high count.

Had a wander round the headland in mild, pleasant conditions this afternoon. My first Dunlin of the year was roosting on Skate's Nose, along with 279 Purple Sandpipers. Nine Common Scoters went south.

I had a pleasant walk round St Fittick's this morning in mild, breezy weather. Quite a few birds were singing, including a Skylark and several Chaffinches. Also around were two Woodcock, two Water Rails, four Teal, eight Snipe and four Redwing.

Stunning pics of the Jack Snipe, Andrew. In the first pic, it looks like you are reflected in its eye as you're taking the photo! Love it!

I had a morning walk around St Fitticks Park but there was not too much to see,as there was a strong wind for the most part and the birds seemed reluctant to show themselves.Despite this,there were signs that Spring Is not too far away,with Reed Buntings,Song Thrush and Chaffinch In good singing voice.A Water Rail was heard at the concrete bridge but remained out of sight.Two Teal were on the Burn and only a couple of Blue Tits were at my Feeders.
Just as I was leaving,all of a sudden a few Magpies started to get agitated at something on the ground,on the north side of the Burn,then all of a sudden,out of nowhere,came about another 20+ Magpies joined In and a few Carrion Crows and Rooks.Not sure what the commotion was about but I suspect a Fox or a Cat was around.
Last edited: Feb 21, 2021

Not sure what the commotion was about but I suspect a Fox or a Cat was around.
Click to expand...

Would they make that fuss for a mink I wonder?

Not sure If Mink have been seen down there,Delia.
Perhaps Andrew may have an Idea

I've not heard of any mink in this area. An Otter would perhaps be more likely. I've seen a lot of Magpies in that area recently. A week or two back they were very noisy but it seemed that what they were agitated about was another Magpie that they were chasing and pecking.

Things have been relatively quiet over the weekend, although plenty has been singing in the milder weather. Yesterday, St Fittick's held six Snipe, two Teal, three Water Rails, a Stock Dove, a Great Spotted Woodpecker, a Goldcrest and at least ten Bullfinches.

Today things were fairly similar, although Snipe were up to nine and there were three Siskins. A Dunlin was on the north shore and a Mistle Thrush flew inland over the golf course, but otherwise the headland was pretty quiet.
Last edited: Feb 22, 2021

Not too much around the headland this afternoon but it was rather lovely. A Dunlin was again about and a sprinkle of Pied Wagtails around the breakwater were probably on the move. There were very few Black-headed Gulls about, as if most have already left for their breeding areas.
Last edited: Feb 22, 2021

Got the auto correct on have you Andrew?