The weather was cool but pleasant and calm today. It was fairly interesting for birds. I began at St Fittick's where I almost immediately found a Siberian Chiffchaff in a tit flock on the north side. It's good to know that a few birds are squeezing through from the east. The marsh was fairly busy and I had fantastic views of my first Jack Snipe of the autumn, crouching rather conspicuously by the reeds at the east end. 13 Common Snipe, a Teal and a Wigeon were also present. A Common Chiffchaff was also in the area and there were three Stock Doves on the newly cut grass on Tullos Hill.

The calm conditions helped me find the bird of the day, which was a classic winter-plumage Black-throated Diver around the harbour mouth - my first here since February 2017. It was diving regularly and eventually drifted north into Aberdeen Bay. The Grey Plover was still around and offshore a female-type Velvet Scoter was sitting on the sea. Two Barnacle Geese flew southwards at dusk.

Fairly gloomy here today but the rain relented through the middle of the day and I had a good walk around the headland. Seawatching was interesting without producing anything spectacular. Five Arctic Skuas (all adult pale phase) and a Bonxie passed in about a ten minute period. A Manx Shearwater was lingering. Ducks included two Velvet Scoters, 12 Goldenye, a Common Scoter and 28 Teal. Two Puffins were perhaps the most surprising birds passing and a Black Guillemot also went north. Not much else was around but the Grey Plover was still about and Dunlin was on the breakwater.

I suspected birds might be 'in' this morning and a look out the bedroom window revealed a few groups of Redwings going over, as well as a Peregrine scooting around the city centre, perhaps with an eye on them. Reports from others enticed me out early in the afternoon. Redwings were the most conspicuous species with 85 counted. There were also at least 45 Blackbirds and, most impressively, 34 Brambling. This included a single flock of around 25.

It's been a long time coming but I also connected with my first Yellow-browed Warbler of the autumn, which showed quite well in the willows near Skate's Nose. The only other warbler was a single Chiffchaff. I had a quick look out to sea - enough time to pick out a Short-eared Owl that was flying straight towards the land. It arrived a little to the north of the foghorn and presumably came down somewhere nearby. On the way back home, I had flight views of a noisy juvenile Ring Ouzel that flew up from near the allotments and landed in a conifer.

Other stuff included the Grey Plover, a Dunlin, three Teal and some action on the Purple Sandpiper Totaliser:

I had a look around the headland late in the afternoon in mild, breezy conditions. Pretty much all the migrants from yesterday had cleared out. I did manage a patch year tick when a Tree Sparrow appeared briefly on one of the feeders in the allotments. Grey Plover and Dunlin were both still around. Two Wigeon and a Teal flew through with another six Teal flying into the harbour and resting on the north shore. While tramping around the Battery at dusk I flushed two Jack Snipe, so presumably those were still arriving in.

Quite a chilly and breezy day here in Torry. I thought it might be interesting on the sea and a look from home produced two distant terns, which were probably Sandwich but were too distant to be sure of. Not too much was around the headland so I spent the late afternoon seawatching. There wasn't a huge amount moving but the mix of species was quirky. Six Whooper Swans went north in two groups. Other waterfowl moving included 24 Wigeon, nine Mallard and three Common Scoter. A drake Long-tailed Duck was sitting on the sea and a Black Guillemot also flew past. A group of five Little Gulls drifted through at a bit of a distance. Relatively close was a Sooty Shearwater, which caught the low evening light very nicely as it headed north.

As I headed home over the golf course, a bewildered looking Barnacle Goose took off from the fairway. Given the winds, I wonder if it was from the Greenland population.
C

Illustration, please!
My walk at sunrise (so much easier now!) provide nothing of great note. But, sitting, working on the computer I looked up to see 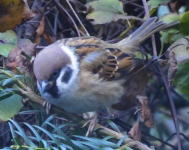 in the yew right outside our window. Travelling through, I assume. But maybe it came to admire our latest re-wilding that had its first scything yesterday.

The wind had gone round to the south after a couple of cold days. I spent the morning around St Fittick's. It was mostly quiet, although a Wigeon, four Teal and four Snipe were in the wetlands. A bit of stomping around the scrub eventually flushed a Woodcock. Five Redwing and a heard only Brambling were also evidence of migrants. I also heard a Goldcrest, which I think is my first of the autumn.

Things became slightly more epic on Tullos Hill, which featured a record-busting flock of 13 Stock Doves, most of which are pictured below. These were almost upstaged by a Snow Bunting, my first of the year, which flew over before coming down around the top of the hill.

Mid-afternoon, I headed off round the Ness. I was pleased to see that most of the Purple Sandpipers were now roosting back on Skate's Nose, although a few rebellious non-conformists were roosting on the breakwater. Predictably this resulted in some significant action on the Purple Sandpiper Totaliser:

That's Numberwang! The rest of the day was spent seawatching. A few things had been reported further south and things were okay if not spectacular here. Five Little Gulls drifted through and a Manx Shearwater and a Common Scoter went north. A Blackbird flew in off the sea, to round things off.

A mild, breezy day in Torry. Six Redwings were along Victoria Road, as I headed out towards the foghorn for some seawatching. There was less moving than yesterday but it was soon apparent that there were a lot of Little Gulls around. I eventually counted 17, a mix of adults and juveniles. I think that's the most I've ever seen here, probably by a long way. Efforts were rewarded with a single Little Auk, heading south at relatively close range. It probably came down on the sea. Other birds moving included three Wigeon, four Teal and a Common Scoter.

There wasn't too much else around, although I saw at least one Red Admiral on the wing.

A combination of being busy and it raining a lot have meant that I've not had too many opportunities to get out locally this week. I've not seen much when I did either. Today I had a look around the headland for the last couple of hours of the day. A Woodcock sailing along Abbey Road was maybe the best thing. Otherwise, a juvenile Black Guillemot was off the foghorn. The forecast looks a bit grim for tomorrow too, so I may not add that much.

Andrew Whitehouse said:
A Woodcock sailing along
Click to expand...

"Sailing" would probably be right this wet weather LOL
A

I had a quick sea watch at the foghorn around lunchtime today, whilst waiting to pick up the family later on.

Highlight was probably the adult Little Gull feeding consistently directly offshore from the foghorn itself, hanging around for at least half an hour. Also a steady stream of Gannets going past, including a lot of juvenile birds. 2 flocks of Common Scoters went north, totalling 12 birds, and a couple of Red-throated Divers were close in to the shore.

I managed to get around the headland this morning before the rain set in. It was pretty uneventful, with nothing much happening on the sea. The main interest came just before the rain arrived, when birds were certainly arriving in from the northeast. Arrivals included 10 Brambling, six Fieldfares and two Redwing. I suspect more will have come in since.
C

Supporter
What points do I look for to ID this diver? 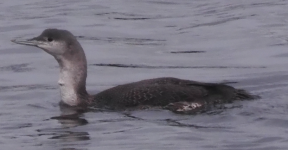 RTDs have narrow beaks with the lower mandible making it look up-turned, don't they? Flat heads, not what in whales would be called a melon? 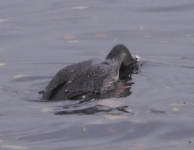 And have a pale neck? Would like to get it right. Apart from two species of seal, it was the only thing of interest on a grey morning.

Cucurrucucu said:
What points do I look for to ID this diver? View attachment 1413318 RTDs have narrow beaks with the lower mandible making it look up-turned, don't they? Flat heads, not what in whales would be called a melon? View attachment 1413319 And have a pale neck? Would like to get it right. Apart from two species of seal, it was the only thing of interest on a grey morning.
Click to expand...

I had a look around St Fittick's this afternoon, just as the light began to fade. The highlight was a startling, close encounter with a Woodcock. It scuttled about in the leaf litter just a few metres away. Another was flushed near the railway line. 12 Snipe were in the marsh, as was a Wigeon.

I've been around the headland the past two afternoons but it's been a bit quiet. Yesterday produced a Chiffchaff along the north bank and a Harbour Porpoise at sea. A nice flock of around 400 Pink-footed Geese flew south. Today the conditions looked promising for seabirds but I couldn't see anything notable other than a single Little Gull lingering fairly far offshore.

I had a look around St Fittick's this afternoon, in pleasant but cool conditions. Snipe were quite numerous around the marsh, with at least 18 present. The thermal imager picked out a smashing Jack Snipe along Tullos Burn. At least 26 Siskins were the first large congregation I've seen this winter. A Water Rail was heard calling, as was a Redwing. More depressingly, the Tullos Burn by the concrete bridge was clearly very polluted, with lots of unpleasant looking white scum on the surface and a horrible chemical smell in the air.

Had a walk round St Fitticks Park this morning.Sadly,the polluted water Is still there
Water Rail were a feature of the walk,with at least 4 possibly 6 calling,from different area's of the Park,from the Concrete Bridge and around the Main Pond.A pair of Teal were on the burn just along from the bridge as well.The flock of Siskins were constantly on the move and a party of 7 of Long tailed Tits,were on the trees by the Railway embankment.A Park first for me,came In the form of a Woodcock,which I flushed from the Top Path.A couple of Roe Deer were also seen,In the trees off the Football (Triangle) Pitch.
C 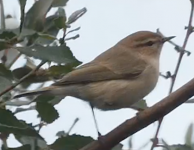 Was that a Scandinavian migrant taking refuge in our bird cherry all afternoon?

Cucurrucucu said:
View attachment 1414102 Was that a Scandinavian migrant taking refuge in our bird cherry all afternoon?
Click to expand...

Possibly Siberian rather than Scandinavian. That looks good for a Siberian Chiffchaff. Would be good to know more precisely where it was.

Surprises Through My Zeisses / 12 The Eagle, The Geese and The Fish