Supporter
Were they a ringed plover, several turnstones and on dunlin on the Greyhope rocks today? 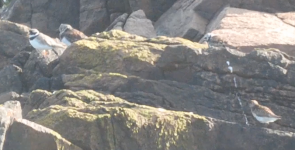 Cucurrucucu said:
Were they a ringed plover, several turnstones and on dunlin on the Greyhope rocks today? View attachment 1459097
Click to expand...

Supporter
Are the (5 or 6) dead birds on South Breakwater gulls?

In an unusual move, I was back birding in Torry again today. It was a bit of a scorcher out there, so I waited until the relative cool of the evening to have a look around the headland. Things were mostly as expected for the season. 55 Goosander were gathered and there was a reasonable selection of waders in Greyhope Bay, including three Dunlin and three Knot. Sadly, a Kittiwake on the rocks looked as though it was succumbing to bird flu. An impressive 98 Swifts were over Torry at dusk.

Not as many as Andrew reported but another Impressive number of Swifts,over Torry this morning.With an approx of 50 to 70 birds over Abbey Place/Balnagask Road.

Had a wander round St Fittick's this evening. It was pretty quiet but two Common Sandpipers were in Nigg Bay.

I looked around the headland this evening. It was pretty quiet but there were reasonable numbers of waders around, including a Knot and Dunlin in Greyhope Bay and two Common Sandpipers again in Nigg Bay. Almost nothing was moving offshore, unusually. 78 Swifts were over Torry.

I had a pleasant walk around the headland this morning. One species on the move today was Canada Goose, with two groups totalling 71 going north. The usual waders were around in Greyhope Bay, with a Knot and Dunlin again about. Things were still quiet offshore but six Teal and three Puffins went north. A Harbour Porpoise was also around.

It was a pleasant evening for a stroll around the headland. 74 Goosanders were in the harbour and waders included three Dunlin. The sea was more diverting than it has been for a while. Two Arctic skuas drifted north, doing the odd bit of harassment as they went. Nine Manx Shearwaters also went through and a couple of Harbour Porpoises included one quite close in. Better still, a Minke Whale surfaced twice about a kilometre out as it headed south.

Another lovely, warm evening here in Torry. A juvenile Goldeneye was among the Goosanders in the harbour. I was surprised to see a Snipe flying up from the rocks in Greyhope Bay. Three Manx Shearwaters went north offshore.