Encouraging progress in the protection of eagles breeding in Sicily. 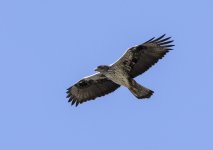 ​
In 2011 there were just over twenty pairs of Bonelli’s Eagles nesting in Sicily and the population was plummeting through the wholesale theft of eggs and young for the rich illegal falconry market. The risk was that the bird would become extinct in Italy – and as the total European population is estimated to be under a thousand, so the importance of the Sicilian birds is clear.

The Gruppo di Tutela Rapaci (GTR) was formed in 2010 and its volunteers started their surveillance of the nest sites that had been robbed the previous year and since that year the work has been extended to around 40 known nesting sites. Steadily the numbers of young birds successfully fledging increased and last year reached an unrivalled total with 45 young birds already having left the nest with another two about to do so.

It is believed that only 1 in 10 birds will survive to reach maturity so the scale of the increase in population is very encouraging.

The GTR group includes volunteers from LIPU, EBN, WWF, SWF, MAN, CABS and others and with financial support from, among others, LIPU-UK the technical work has become more effective. A European Union Life project has allowed 20 of the young to be fitted with GPS tracking devices so more can be learned about their movements in order to help more birds in the future.

A link worth following: https://www.lifeconrasi.eu/home-en 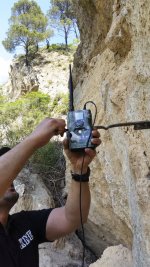 Many of the nests are monitored by trail cameras provided by LIPU-UK and, at the site that I visited in May 2018, the local villagers were very keen to help protect “their” eagles. A shepherd had challenged a “stranger” in the area and who was, in fact, one of the LIPU group keeping a watch on a nest site. When all was explained, the shepherd recruited more locals and the team of guardians was boosted, there was a strong local pride here – “no-one is going to steal our eagles” they were saying.

LIPU-UK, the British section of LIPU, has helped the protection every year since 2013 by raising funds to buy trail cameras and more importantly the mobile phone services which make the nest surveillance totally effective. If the camera detects movement the images appear immediately on the mobile phones carried by the surveillance teams – most of the time these are images of the adult feeding the young birds because the presence of the cameras has proved to be a real deterrent to the thieves who would plunder the nests.

It is gratifying to be able to report positive action in Italy – it’s not all doom and gloom. Just a few days ago I was told of great excitement with two new nest sites being found in a new area. It may have been a slight exagerration when Loredana said, “Bonelli’s Eagles are everywhere!” but what a wonderful idea behind the words.

Thanks for the info. That is really encouraging, and great work by everyone involved.

Thanks for posting, great to see initiatives like this producing good results!