I am about to post my very first article in my facebook page: a wildlife conservation group based in Iloilo City, Philippines. And I am going to share few behavioral informations about Little Ringed Plovers. I am currently reading "The Population Ecology and Conservation of Charadrius Plovers" by Mark A. Cowell and Susan M. Haig. I read one of the tables that shows the timing of breeding seasons of Charadius plovers, and I think my reading comprehension just run out (since english is not my first language). So there was a column heading that says B.D.C, an abbreviation for "Breeding Distributional Contraints on Timing". To my understanding, I think, it simply means restricted breeding distributions. Any comments on that? Now, under the B.D.C. column, Little Ringed Plovers were labelled as N (Northern Hemisphere) 2 (Subtropical) V (Variable Over Range of Species) and followed by a superscript letter "c" after which refers to insignificantly within tropical latitudes or arctic latitudes or it also means "unstudied in these regions". This is beyond my understanding, I really need help from someone to simplify these datas about LRP's, since I will be including it and of course to learn the biological and ecological aspects of the said plover species. Overall, my intrepretations is that C. dubius do not breed within these regions (N2V). If it does not, this contradicts with Kennedy et al. (2000), "A Guide to the Birds of the Philippines" as C. d. dubius is recorded to be residential within certain islands in the Philippines (a subtropical climate). I extracted the pages regarding the issue and attached it here. I am looking for everyones expert opinions. Thanks!

Here is a picture of a Little Ringed Plover for attention, taken from the shingly rivers of Tubungan, Iloilo, Philippines. 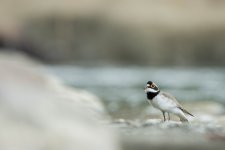 I think, I figured it out. Maybe Breeding Distributional Constraints on Timing means Restricted Breeding Distribution by Season. In LRP's, it was denoted as N2V(c) (nothern hemisphere, subtropical, variable over range of species and within tropical or arctic latitudes or unstudied within the regions). And I just realized in the table, that Philippines was included in the breeding locations. Could it be that they are pointing out that LRP's do not breed within these regions but do breed occasionally depending on seasonal conditions? Which means they do not usually, but may insignificantly breed. Since C. dubius exist in different forms, take the oriental countries for example. There are non-breeding and breeding populations. Like in the Philippines, there are two races that occur i.e., C. d. dubius (resident) and C. d. curonicus (migrant). Now there are both forms that exist within a certain geographic range, but are not similar in distribution as both differ from being migratory and residential. Contrarily, they are within subtropical climate. Having some LRP's as a resident, hence, they classified it "variable over a range of species" because not all population breeds within the said regions but may vary by species (probably referring to subspecies?). Maybe it is best to contact the editor of this book.