Superb thread Jo's. Ooh, that Large Chequered Skipper on your finger too. I drool.

Beautiful images of all these Butterflies Jos and great landscape images as well !

Many thanks all, much appreciated

Final full day, back to Mount Baldo. At the base of the mountain, I started at Avio village on a small area of wasteland. Found this spot the previous year and again this time it proved excellent for low altitude species - among Common Blues and other species, a bunch of Spotted Fritillaries, several Adonis Blues and, all new for the trip, one Mallow Skipper, one Short-tailed Blue and one Lang's Short-tailed Blue. From here, I entered the excellent Molini Valley - near devoid of butterflies two weeks earlier, perhaps due to the violent hail storm, things were far better now. On flower laden verges and meadows, many stops en route up and many butterflies, Arran Browns common, several Scotch Argus and Great Sooty Satyrs also, plus various fritillaries, both Old World and Scarce Swallowtails, lots of Marbled Whites and a good range of others. At Baldo itself, I once again took the ski lift up to 1840 metres and then walked northward along the ridge to thereafter drop down the fairly steep slope back to lower altitude. No new species here, but very pleasant - not only Common Brassy Ringlets, several Large Wall Browns and Olive Skipper, but a very nice gathering of about 18 Bluespot Hairstreaks. Overhead, as well as Alpine Chough and Alpine Swift, two Golden Eagles.

Time however was ticking, next morning I had a flight from Bergamo, so it was I departed for the final drive westward. To round off the trip, I decided to randomly stop at some lowland sites south of Lake Garda - I thought I might find some common lowland butterflies that were still eluding me on this trip, Bath White and Geranium Argus for instance, but in reality I found only hot dry areas with basically no flowers and no butterflies. Concluding butterflies were a handful of Small Whites, one or two Meadow Browns and, first of the trip and last butterflies of the trip, two Brown Argus. 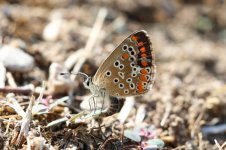 Will do a full species list soon, plus a few photographs of the some of the butterflies (almost finished sorting them!)

Butterflies in the Italian Alps, August 2020.
2