More DO lenses coming in 2018 .... I sure hope we don't have to wait another year for the 600!
http://www.canonrumors.com/multiple-new-diffracitve-optics-lenses-coming-from-canon-in-2018-cr2/

If Canon can shave off a significant amount of weight, say 800 to 1000 grams, then it will be a very tempting lens! I know that does not sound a lot but I went from the 600 F4 L IS to the 800 F5.6 L IS to save 800 grams - it makes a big difference! Unfortunately I think that Canon's current pricing policy will put this lens out of the reach of mere mortals.

If Canon can shave off a significant amount of weight, say 800 to 1000 grams, then it will be a very tempting lens! I know that does not sound a lot but I went from the 600 F4 L IS to the 800 F5.6 L IS to save 800 grams - it makes a big difference! Unfortunately I think that Canon's current pricing policy will put this lens out of the reach of mere mortals.
Click to expand...

John, as per the above football kicking, it would seem that a new 600mm f4 DO would come in anywhere from ~2.7kg(6lb) - 3.15kg(<7lb) ..... so a saving of ~1200 grams to ~800grams - hopefully toward the greater end of weight savings. There is also importantly a length reduction as well as movement of the centre of mass rewards. It should be hand holdable and a big improvement for BIF. As per the 400 it should also take a 1.4xTC quite well.

I fully expect the new DO to come in under 3kg - I 'd suggest anything more would be a deal breaker considering the Big Whites are also rumored to be going on a diet of an unspecified amount along with other improvements for the Mark III version (see post#6 above). The new DO at 2.7kg or less would be simply sensational!

Quite well at that price simply isn't good enough IMO. I would expect excellent results and with the 2x as well.

Yes Dave, I agree - I meant just as well as the 400 DO ISII, and indeed the refractive 600 L ISII, both of which are excellent - virtually imperceptible loss of IQ and AF performance. I hope the performance with the 2XTC is excellent as well. :t:

Beam me up Scotty !!

Canon is working on the stuff of Star Trek - transparent aluminium (aloo-minum for you US folks! to get better flare performance from its diffraction elements and optical train ...... beam me up Scotty! :cat:
http://www.canonrumors.com/patent-using-aluminum-to-reduce-flare-in-do-lens-elements/

August 2018 ? announcement date ? for the 600 f4 DO http://www.canonrumors.com/multiple-new-diffracitve-optics-lenses-coming-from-canon-in-2018-cr2/

Also, other patents for upgrades to the range of existing super telephotos (IS III)? http://www.canonrumors.com/patent-lots-of-big-white-lens-patent-applications-surface/
A slight change to the optical train? maybe to shorten the length and reduce weight a bit and move the Centre of mass rearwards ?

I sure hope Nikon is paying attention and isn't just sitting there twiddling it's thumbs ! Their 300 f2.8 needs a serious upgrade to be competitive weight-wise, and I'd love to see a 600mm f4 PF too :eek!::eek!:

Haha that would be one serious bit of kit ! :t:


Nikon is in a bit of danger of being left in the dust lens-wise by Canon .....

As a minimum I would think Nikon needs to upgrade the 300 f2.8 pronto with Fluorite glass, next gen VR system, and class leading low weight to be competitive with an upgraded Canon IS III series.

Though I wonder if Nikon wouldn't be better off also leapfrogging technologies and making the major step with a FF curved sensor mirrorless offering, and new dedicated range of smaller, lighter, high performance lenses purpose designed for the high resolution sensors of the future.

Along with an eliminated mirror box and much reduced Flange Focal Distance this could offer length reductions of ~50mm or so and corresponding weight reductions, even before advanced composites construction and PF optical trains are factored into the equation.

A similar suitably dimensioned and interfaced adapter could be used for the Nikon 1 series which should be updated with a V4 /J6 iterations.

There is no reason why Nikon couldn't use exactly the same curved sensor mirrorless FF 'body' to also house an APS-C format sensor offering as well, since essentially we get down to a very thin camera body which is AMOLED screen + room for hand and UI buttons sized in the height and width directions .... it might only be ~10mm deep not including a massive man sized full grip projecting forward at the side. The FF would have the option of a vertical grip option and corresponding increased battery capacity.

I can't see significant sources of competitive advantage for Nikon apart from this. The threats from Canon's lead in lenses, and the rapid progress of Sony/ Panasonic mirrorless offerings are too great. Not to mention ubiquitous computational Smartphone photography which threatens to swallow everything up to MFT level in several short years for most things short of ultra fast aperture, and long telephoto photography needs ...... :eek!:

I don't think a slow, historical evolution for Nikon is going to cut it .... shuffling deck chairs on the Titanic won't stop the ship from sinking ...... time for a bold move Nikon !

The upgrades are rumoured in the areas of weight reduction (how low can they go with a refractive design - that will be interesting!), IS improvement, coatings, and perhaps AF performance (in order to work more synchronously with an eventual FF Mirrorless body - that's my guess anyway .....)

There is speculation that this new 600 will contain DO elements, but I don't think they would combine the two streams. It's antithetical to Canon's finger in every pie business model anyway. This could mean no 600 f4 DO until 2019 ..... :-C

The new 600 is only ~13% more expensive compared to theMkII ..... for the lesser amount of glass!:eek!:
Canon - the Porsche Clubsport of the photographic world 8-P

Poor Sony?! at least they're in the ballpark with their 400/f2.8 ...... Poor Nikon! :eek!: they're looking decidedly porky now - particularly the 300/f2.8 - what the hell happened to that one?! did the design file slip down behind a cabinet and get lost or something?! Nikon's supertelephotos are all looking roughly ~1kg overweight each! Quick! Call 1-800 Jenny :eat:

How bizarre - I just had a poke around on several official Canon websites and couldn't (easily) find the lens schematics for the new MkIII superteles, yet I came across some here: https://petapixel.com/2018/09/05/ca...-is-iii-and-600mm-f-4l-is-iii-are-20-lighter/

[EDIT]: It seems like Canon USA at least, with a bit of digging around, has listed full specs, schematics, and MTF charts for the new MkIII lenses: https://www.usa.canon.com/internet/...s/ef/super-telephoto/ef-600mm-f-4l-is-iii-usm

It seems like Canon have adopted the same trick as Sony in reducing weight, ie. effectively a very large air spaced objective to peel weight out of the front of the lens - I'm pretty confident a similar approach would see the DO version come in sub 2.5kg ... o

It will be interesting to see the IQ performance of the new MkIII's ..... looking at Canon's MTF charts, they may have taken a small hit ..... 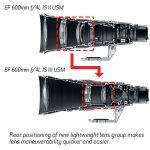 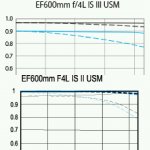 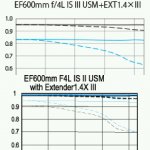 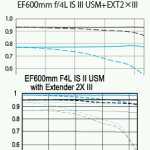 Not for me - it just didn't stack up when tried next to the (my) Canon version.
Great lens but the AF was pants.
V

Chosun Juan said:
It will be interesting to see the IQ performance of the new MkIII's ..... looking at Canon's MTF charts, they may have taken a small hit .....
View attachment 673399

Nikon will be laughing all the way to the bank when looking at those MTF:s.

Vespobuteo said:
Nikon will be laughing all the way to the bank when looking at those MTF:s.

It looks like more than just a small hit compared to the MkII's ...... so perplexed was I that I checked the 400 too, and it's showing a similar drop off in theoretical IQ like the 600.

I mean these new MkIII charts look more like they belong to a Tamron than an uber dollar Canon supertelephoto ...... they are definitely not a Tamron price though! :eek!:

Even more puzzling is when you look at the new lightweight Sony 400 f2.8 G-Master (which is essentially the same lens design concept as the new MkIII's) and it has a stellar MTF chart - more like the highly regarded MkII Canon's ......

Chosun :gh:
You must log in or register to reply here.