It is my first seeing this bird, so would like to get confirming incase I got this wrong. From far I thought it is again just Crested Serpent Eagle. It is not until I back home and looked the photos closely. It doesn't look like Crested Serpent. Based on my own finding, it should be Crested (oriental) Honey Buzzard? and it is winter migratory bird?

Both photos below were same bird. Appreciate for any help. Thanks. 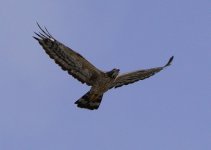 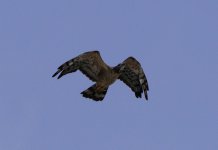 Yes, it's an Oriental Honey Buzzard. Look at the small pigeon-like head and small bill (I believe they're specialised feeders, eating only bees and honeycomb, so don't need a strong bill). This looks like an adult or sub-adult male with that plain grey head, dark red eye, black trailing edge and tail pattern consisting of three black bands, two prominent and broader. You can also clearly see the gular (throat) stripe, which I think is less distinct in juveniles. Plumage is variable and only some birds have these rusty/rufous tones on the underwing coverts and body.

Thank you so much @Butty @andyb39