Two birds in one.

[I find this story entirely credible. When crows started visiting my bird bath to soften pieces of dried bread and such, I started putting out some blue marbles for them, based on another story I'd read. As soon as the marbles started disappearing, the crows started leaving little food treats for my enjoyment, often in the form of chunks of dead mice and bird embryos. A little gruesome; I would have preferred some sprigs of evergreen decorated with pull tabs or whatever, but it was what they thought I'd like I guess. - Ruff]​

Crow Family Thanks Man Who Helped Them With Tiny Gifts​

“It took a couple of days to wrap my head around just how amazing this was.”​

Stuart Dahlquist never thought he would become friends with the new family who moved in next door to his Seattle home.
From the start, it was clear his new neighbors — a family of crows — liked to keep to themselves.
“This particular family of crows has been hanging around our house I'd guess about four years,” Dahlquist told The Dodo. “They had nested in a large Douglas fir in the front yard and we could hear the babies when the adults fed them.” 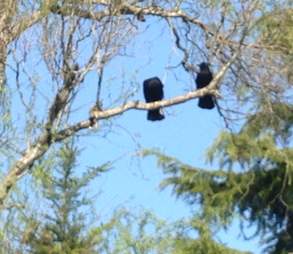 STUART DAHLQUIST
Dahlquist loved to listen to the excited chirping of the baby crows. But one day, he went outside and immediately realized something was wrong. Both chicks had fallen from their nest, and their parents were unable to help them.
“[The chicks] were almost able to fly, but instead were just running around the yard — their parents squawking,” Dahlquist said. “I caught the two of them and got them into a tree. I put some food and water underneath them in case they fell again.”
Dahlquist’s act of kindness did not go unnoticed. “The adults were really pissed off,” he said, “but seemed to begin paying more attention to us.” 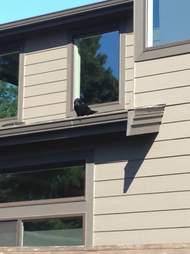 Crows have the uncanny ability to recognize faces. This helps the intelligent birds remember which humans are threats and which are friends.
Dahlquist continued to leave snacks at the base of the fir tree, never expecting anything in return. But the crows decided to show their gratitude with a little gift.
“The first one was kind of confusing,” Dahlquist said. “It was sitting right in the middle of the area where I toss their food.” 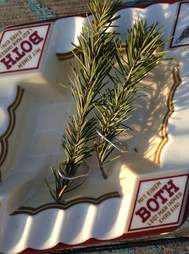 STUART DAHLQUIST
“I noticed it straight away because I'm kind of sensitive about trash going where it belongs,” he added, “but the pull tab being threaded onto the sprig of fir wasn't normal and I hung onto it.”
The next day, Dahlquist was shocked to find another twig with a soda tab in the same spot: “This is when it dawned on us that the crows were making and leaving them.”
Dahlquist, who has rehabilitated and released several injured crows in the past, had never been thanked so explicitly before. 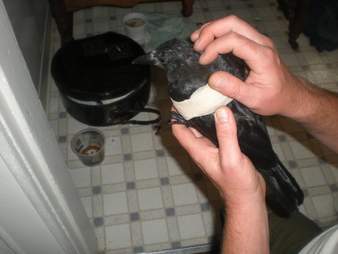 STUART DAHLQUIST
“It took a couple of days to wrap my head around just how amazing this was,” Dahlquist said. “Not only were our crows leaving gifts, but they had created something beyond. It was crafting.”
Since the exchange of gifts, Dahlquist’s relationship with his crow neighbors has only gotten stronger. 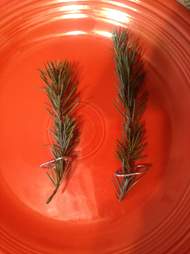 “They'll follow along when I take my walks, landing on the wires along the way,” Dahlquist said. “The adult male … is very amiable and will fly sometimes within a few feet, swooping by to say, 'Here I am!'”

Excellent. Thanks for sharing this.

J
Help, the crows have started a war