Similar to the thread on binocular DIY stabilisation, this is to brainstorm ideas on making an image stabilised spotting scope.

DIY Image Stabilisation (IS) for binoculars

My search is over. This is the simplest option by far. Just get a selfie stick on ebay amazon. Weight and length perfect. Telescopic for storage and transport. Doubles as… a selfie stick. Can also be used as monopod or as a handle.

Difference is there is more freedom to experiment with the optical pathway in a telescope, which does not require collimation between two barrels. A binocular even if minutely de-collimated will be detrimental to use, even if image quality doesn’t noticeably change.

My idea is to stabilise by shifting an existing optical component of the scope as to not significantly affect the image output. The best candidate is a Schmidt pechan prism, which is especially compact when dealing with the small true angle of view in a spotting scope.

Shifting the prism, is how binocular collimation is achieved. here we can mount the prism on actuators controlled by a gyroscope.

As to why optics makers do not already produce such a product… that will be a long discussion in itself.
B

I have such a Russian monocular.
It is extremely noisy.
It is big.
It takes a minute for the gyros to get up to warp speed.
The gyros slow down even with 4 AAS.

Obviously a more modern version would be better.

Canon should be able to produce, say, a 30x IS telescope, but choose not to do so.

Binastro said:
I have such a Russian monocular.
It is extremely noisy.
It is big.
It takes a minute for the gyros to get up to warp speed.
The gyros slow down even with 4 AAS.

Obviously a more modern version would be better.

Canon should be able to produce, say, a 30x IS telescope, but choose not to do so.

Very interesting, what size and magnification is it?

When I said gyroscope, was thinking solid state microgyro like those in canon lens/bino.

Indeed Canon Nikon and many others can produce an image stabilised mini telescope any day they wished, but:

Unfortunately, I could not remember how to get access to the batteries, and I put it to one side.

It may actually have 8 AAs and is a beast.

I might try to dig it out sometime, although it is likely that the batteries have leaked after twenty years.

One of the strangest devices I have seen.

Zeiss made a monocular version of their 20x60 IS binocular. I think Hermann still has one of those.
K

Nikon has had a VR image stabilised version of their EDG Fieldscope. Even bigger and heavier than their normal EDG. It never took off, as it still needs a tripod. I have been told that in windy conditions it was good, but never tried one.

Those examples are interesting, edg was priced 6000usd, pretty extreme and as you say still needs tripod.

Zeiss mono has long since ended production. Hermann warned me it is very delicate and not drop resistant.

So currently the best option I can find is a Bresser 16x30 IS monocular. They all have the same boxy design, probably coming out of the same factory. 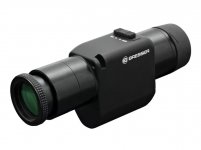 Three images of the Zeiss 20x60 S mechanically image stabilised monocular referred to by Henry in post #5,
from: https://vintage.cameramate.com/zeis...monocular-with-image-stabilization_34504.html 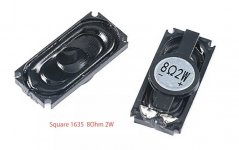 Thinking about the issue of linear actuators, the requirement of small accurate medium frequency linear motion, sounds a lot like audio speakers lol.

Ebayed a selection of miniature full range speakers to play with, possibly by arranging them in an X or V configuration to push pull the prism. These ones are small enough to fit in a potential scope barrel. 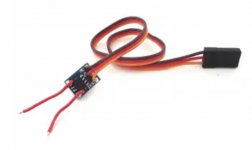 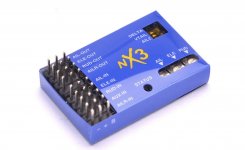 Later if I feel there is more to optimise, might try arduino microcontroller programming. If anyone has experience with arduino it would be great to collaborate on this project!
H

kimmik said:
Indeed Canon Nikon and many others can produce an image stabilised mini telescope any day they wished, but:

I think there's another reason: The market for scopes is too small to justify any large investment in a stabilised scope. The market for scopes was always smaller than the market for binoculars, however, I find over the past 10-15 years quite a few people switched from using a scope to using a camera in addition to their binoculars. (BTW, the smaller interest in scopes is even obvious when you look at BF: There's a lot of activity in the binocular forum, whereas the activity in the scope forum has diminished over the years.) There's a reason there's so little innovation on the scope market. And a reason why e.g. Leica didn't make a new model for years and years now.

A stabilised scope would require some serious investment. For instance, a scope would need to be stabilised at high magnifications for longish periods of time to make it worthwhile from a user's point of view, and that's not easy. In addition a scope needs to be waterproof and shockproof to a greater extent than a camera lens. Just putting the lens technology into a different body won't work, I think.

There's also the problem that most people use a scope on a tripod, and not because they love carrying great big tripods all the time. They carry big tripods because they often use a scope for long periods of time to scan, say, a flock of shorebirds or waterfowl. So you really need a tripod even if your scope is stabilised. Would you be prepared to pay the price and weight penalty a stabiliser entails even if you have to carry a tripod anyway most of the time, despite the stabiliser? (BTW, I think that's the reason why the EDG VR scope was discontinued so fast - they simply didn't sell enough.)

I personally think the only type of scope that might benefit from a stabiliser is a small scope used for hiking in difficult terrain where you want to keep the weight down as much as you can. But even such a scope would need to be useable at, say, 40x magnification. That's the main problem with the Zeiss 20x60S Mono, not so much that it's - compared to conventional scopes - somewhat delicate. That's to be expected with a mechanical stabiliser. It works well at 20x, however, in many situations I want or need more than 20x magnification. And the market for such a specialised scope is even smaller than the market for a middle-of-the-road standard scope.

Some good points about market size, agree it is smaller than conventional bino.

My telescope “philosophy”, is that bino is for big exit pupil wide FOV. Monocular is for best magnification and detail. Combine this with desire to lose the tripod - handheld IS monocular as you have also hinted upon.

Zoom is a feature i don’t care much for - i have dozens of eyepieces for the 100mm refractor, the only one I used for terrestrial viewing is 2.5mm exit pupil. It is the sweetspot.

While waiting for the actuators to arrive, found a small SP prism from cheap 7x18 monoculars and 12x25 binoculars - they seem to have identical prisms measuring 22mm long and 8g. 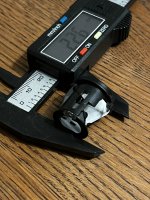 Design concept, the same EP and stabilizer assembly can be fitted to two different objective sizes, and both be compact folding design. 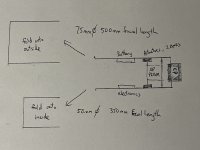 What’s the frequency response of the actuators and what are you using for the gyro sensing?

wllmspd said:
What’s the frequency response of the actuators and what are you using for the gyro sensing?

The speakers once loaded by the prism will have a lower response than specified, but may be adequate since hand tremors are only 1-10hz range.

The gyro i’m using for first prototype is off the shelf model aircraft gyro.

I’m curious about arduino programming so a future version may be closed loop microprocessor controlled.

Brief video to show that a miniature speaker is very capable of moving the weight of a prism assembly. This was controlled by the aircraft gyroscope, powered by 3.5v and less than 1w.

Plenty of dynamic range. Need to design a mount and work on the gyro sensitivity.

Out of the selection of mini speakers, only the larger 3 have enough movement range.

A laser shows the effect of prism angulation on the image axis.