Supporter
After enjoying the 12x36 IS III over the last year and recently trying the nice 8x20 (surprising image quality, although a little compromised in FOV) I'm getting more and more curious about a light 10x IS.
The performance of the 10x20 with its small exit pupil is a bit unknown (although maybe worth investigating).
The price of a new 10x32 IS is twice as expensive as the 10x30 IS II. And while the 10x32 IS has some great advantages (you don't need to press the IS button all the time, improved IS technology, improved body material) it is also heavier (780 g vs 600 g) and also larger 171x142x77 mm vs 150x127x70 mm, and these two last drawbacks are important to me when it comes to a 10x30, even if it's an IS device. Actually, it was the moment I was checking the specs of both 10x IS when I've discovered something unexpected about the 10x30 IS II and 12x36 IS III: to my surprise, they share the same width and thickness, 127x70 mm. I find the 12x36 to be a bit of a handful, and the reason for going small is actually to get a more compact and nimble device. Looking at some comparative pictures, I would have assumed that the 10x30 IS II was actually smaller, but going by the specs is only shorter, 150 vs 171 mm.

Looking at this picture from the review by Piergiovanni in Binomania I would have thought the 10x30 IS II is narrower, but it seems that it's only an optical effect of the picture. 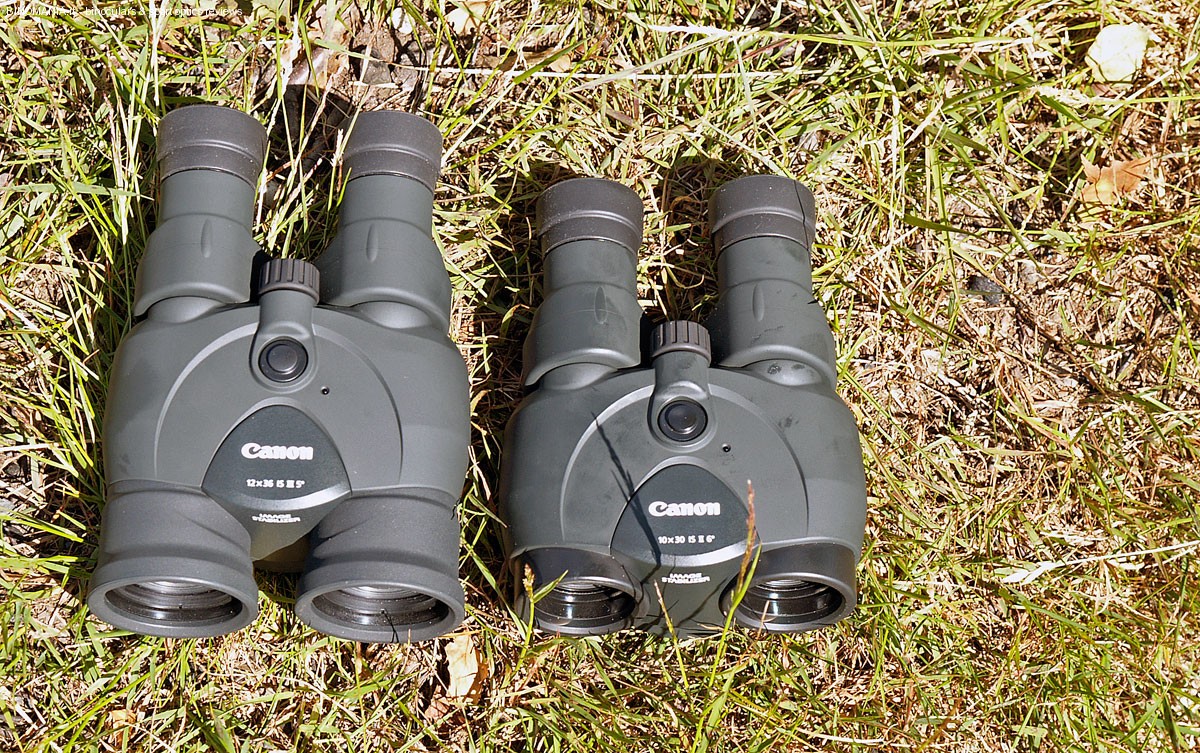 Reading the specs, it seems as if Canon would have used the same central unit of the body and simply attached different objectives and different eyepieces (I'm also unable to tell if the eyepieces of the 10x30 are smaller than the 12x36 or only shorter as well). If this was so, it would be a bit like what happened with some classic Porro binoculars, that shared the same body but with different (longer/wider) tubes for 7x/8x/10x/etc.

Is anyone with first hand experience able to comment wether this is so? Probably the shorter length and smaller objectives makes for an overall smaller package (although the weight difference is only 60 g/2 oz).