I recently went on a hike near Gargrave, UK - near the Yorkshire Dales and came across these birds and I can't figure out what they are. I figured a type of duck either domesticated or hybrid but not too sure.

There were 5 of them, seemingly one larger adult and 4 old juveniles - but hard to tell. They were over 30 cm in height and over 75 cm in length - definitely a fair bit larger than a mallard. I saw them in a small river/stream.

I hope you can help! 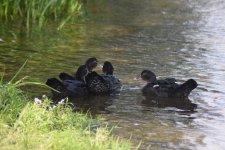 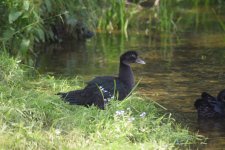 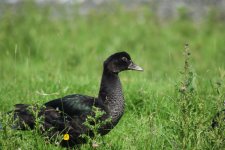 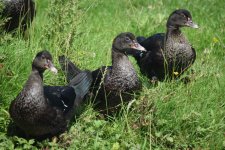 They look to be domestic Muscovy Duck or Muscovy-derived hybrids.

Yeah, Muscovy was what I originally thought when I saw them, but they must be hybridised with something.
S

I'm not seeing a bird that looks like a pure adult Muscovy here, but I'm not certain whether these are juvenile domestic Muscovies or Muscovy x Mallard hybrids. I'm perhaps leaning towards the former as they seem more Muscovy-like in structure than most of the hybrids I've seen, and none of them seem to have obvious traces of Mallard-like plumage.

If one was significantly bigger than the others (not obvious to me from the photos), perhaps that one is a male and the others females, as Muscovies have a big sexual dimorphism in size but not much of one in plumage.