I think this is a Green Winged Teal - female.
Much smaller than the Mallards it was around. 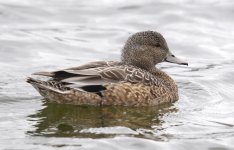 seems to be an American Wigeon.
As always I hope for confirmation or correction from US members. Thanks!

Female American Wigeon for me but I could be way off.
I

This looks "off" for an American Wigeon.
Yes, it looks most like a Wigeon due to:

But there are some things that strike me as odd:
1. The amount of patterning on the sides and back of the bird
2. Head looks less 'dainty' than typical
3. Bill color isn't the typical light gray with dark tip, but appears to have some pinkish hue to it?

What do I think it is? I suspect it's a hybrid Wigeon x something (Mallard?) But I hope for others to comment. Perhaps I'm just unfamiliar with this plumage of a Wigeon.

Edit: perhaps this is simply a young Mallard with a stubby bill?
T

I can't see Mallard here. Plumage, shape, bill colour all wrong. The overwhelming likelihood is that it's an immature American wigeon although I'm not 100% sure you can rule out European: perhaps the flanks are orange enough to allow this, and hence the head-body contrast.

Some of the "features" like the "pinkish" bill are due to visual artifacts (apparent contrast here) I feel.
R

Classic female-type plumage for AMWI. Scapulars and tertials look pretty fresh, so it could a hatch-year bird or a female just completing a molt. Not a male in eclipse.

Thank you all for your input. Photo was taken end of March 2022. Was right about the time we had Wigeons on the lake.
Because of the small size, I thought Teal. Now however it makes sense. Thanks again.
I

What do you think about the patterning on the sides? I cannot find any similar photos of an American Wigeon. ¯\(ツ)/¯

Not disagreeing with the ID, but would like learn if it's normal

I agree with discounting Mallard