Well here we go again 2020 was a bit of a quiet year (and not just because of the virus) as I started a new job which took up a lot of time. Things have settled down now and I have a much better work/life balance so my aims for this year are to hit 200 birds as well as get out exploring Northumberland a lot more and see what butterflies, bees, dragonflies and mammals I can find.

More to follow as I'm heading off out for a walk in a mo...

Nice couple of hours out in the fresh air (bitingly fresh at times with a couple of brief hail showers!) and back home by 4pm after the rain set in. I'm not back at work until Tuesday afternoon so a few more local trips out planned. 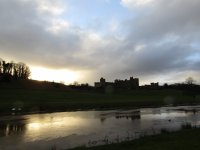 Good luck for the rest of the year.

A quick visit at 3pm proved to be a quiet one with the moor bleak, desolate and empty of life! Don't you just love the short, cold & dark January days?

25: Buzzard ~ two on ground as I approached normal parking spot on moor. Soon flew off but reappeared just before I left at 4pm.
26: Kestrel
27: Carrion Crow ~ two in plantation, perched in upper branches

28: Collared Dove ~ one flew up from conifer to top of St James' Church. Not sure where they have been these past few days as there are normally good numbers along Bailiffgate, Canongate and around the outlying housing estates.

Slowly but surely... I think tomorrow I'll do a circuit of the town as my lockdown exercise allowance and take in the cemetery to look for smaller birds. I could hear a Coal Tit singing as I parked up today. 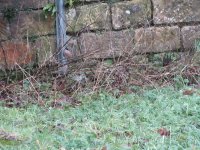 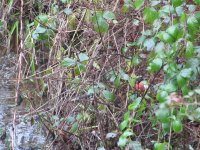 A relaxing (but cold!!!) three hours spent in Hulne Park today as hubby was busy tinkering with his generator in the living room (don't ask!) and it was a choice between birding or housework I arrived at just before 2pm and left at 4.30pm.....and the guy who lives in the lodge at the gate gave me SUCH a bollocking because the park shut at 4pm!!! Well I didn't know as it's always been 11am till dusk! And they certainly don't make it clear at the entrance! Anyway, apart from that pompous prat, I had a very good day.
It was a typical winter's day with not a lot seen nor heard and for the first half hour or so I saw barely anything ~ not even woodpigeons! But then things picked up with a flyover Sparrowhawk. The river was very full and fast so, as expected, no sign of dipper or grey wagtails and the only water birds I saw were a group of six Mallard.
I continued on as far as Filbert Haugh Bridge and was thrilled to finally come upon (and hear!) a group of small birds in the trees nearby. Three Lesser Redpoll were feeding in the upper branches of a Silver Birch, a male & female Bullfinch nearby, Jay heard calling nearby, a female Chaffinch was on the ground nearby and a small group of three Long-tailed Tit passed overhead.
I decided to head back at this point and enjoyed my second sighting of a Sparrowhawk being mobbed by passing crows at the Monk's Bridge. Two Mistle Thrush were feeding below an oak tree opposite.
No other birds of note were seen after this but I had fabulous views of a Roe Deer buck in velvet as he looked down at me from between two trees. He would have made an AWESOME photo but my camera chose to run out of battery and by the time I'd quickly changed it for a fresh one (I always carry two other fully-charged ones in my pocket!) he had moved on out of view. He was accompanied by a female photo below and I was able to get better views of her.
A single Grey Squirrel was seen dashing across the ground and up into a tree where the path below the sawmill joins back onto Farm Drive and at the stone bridge just yards further on I was to see my sixth Roe Deer of the day! A female crossing the small valley and stream below the bridge and, a few yards upstream, a very dark chocolate Fallow Deer pic below I watched these two for a few minutes until I decided I really must head home as it was 4.20pm at this point! 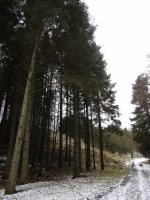 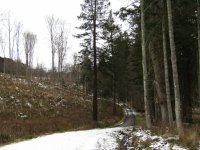 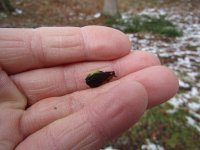 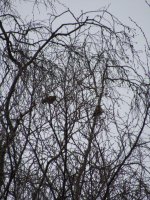 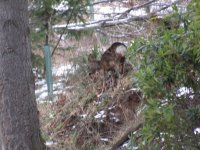 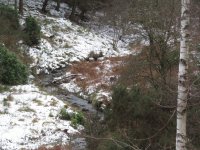 My husband always tells me to listen to the little voices inside my head so I did! After a week of baltic weather the sun came out today and what a difference in both temperature and activity/song levels in the birds! After having Neil at home on the sick (hernia, nowt infectious) for the past six weeks he was back at work today so I wanted to catch up on various jobs before I'm back in at work tomorrow. The sun and the little voices made me change my mind and after a quick lunch I headed off to a spot in Northumberland to look for, amongst other things, Red Grouse (my other two favoured spots having drawn blanks on previous visits).

All was quiet as I parked up and wound down the windows but after a few minutes a couple of Carrion Crow were seen in the distance and I followed them with my binoculars on the off-chance they would put something up or harass any passing raptors. A passing Kestrel was ignored but then a couple of Red Grouse lost their bottle and burst up out of the heather and flew off into the distance with their distinctive loud ''Go-Away'' call. Over the next ten minutes or so another three grouse were seen and heard which I was very pleased about. I even managed a photo of one in the far distance which, when I zoomed into on the computer once back home, was most certainly a male with bright red wattles above the eyes.
A fly-by Buzzard was dive-bombed by the crows but they soon grew bored with it and the raptor was left to continue on in peace.

After twenty minutes of just enjoying the peace and quiet I decided it was time to head back home to my other life as a Dutiful Wife (ha!) and get the tea made. One last scan across the moor and just as I was about to turn the ignition key an 'extremely slim kestrel' flew virtually overhead and across the moor. Something in my head knew what it was....hoped what it was what I thought it was....but I excitedly followed it with my bins until I saw the unmistakable feature I was looking for - the white rump! Yes, get in!!! Female Hen Harrier The third I've seen in my birding life...and all being females. No photo unfortunately as it all happened so quickly and my hands were shaking with excitement!

Moments later a small bird flew by and landed on a gorse bush just a few hundred yards away. A look through my bins had me think it was a female Reed Bunting but I took a few photos anyway and, looking at them closer on the computer and comparing pics in my copy of Collins, I think it's actually a male in winter plumage.

A very pleasant hour & a half out in the fresh air and a balmy 8c - just what I've needed after the past few weeks. Just before heading back into Alnwick I couldn't resist a stop in a lay-by to take a photo of the newly-restored RAF golf ball on top of Alnwick Moor. I really must do that walk from home one day....perhaps in May once the cuckoos etc are back. 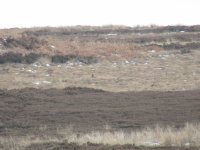 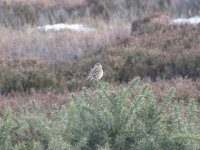 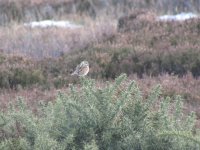 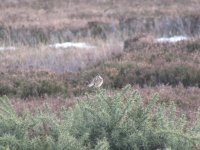 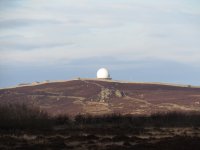 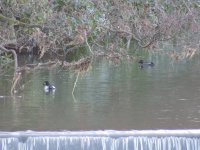 44: Song Thrush ~ first sighting of 2021 though I've been hearing them sing since 20th February

Just a quick walk on the beach after picking Neil up from work - my first trip to the coast since November or December despite it only being 4 miles or so from home! It was an unscheduled spur-of-the-moment suggested by Neil walk too so I didn't have my binoculars on me, just my camera in the glove compartment!

I was woken at 5.50am by the very loud calls of passing Whooper Swans! Sadly no views as I think they passed directly over my flat. There's been a lot of Whoopers moving this weekend with flocks of over 100 in some places. I'm not adding this to my Year List as I much prefer to see these birds and I'm sure I shall in the coming days as I have this week off work.

A very pleasant couple of hours mooching around Boulmer between 2.30pm and 4.30pm with the beach to myself.

61: Goldfinch ~ three in top branches of tree on edge of car park. Usually very common they have somehow eluded me until now!

62: Chiffchaff ~ finally! They've turned up singing for the past week or two in Alnmouth & Howick yet not a peep in Alnwick. Last year I heard my first on 17th.

63: Grey Wagtail ~ male on roof of flat opposite ours! 10.30am. No photo unfortunately as he disappeared off to other side before I could grab my camera.

A little bit of playing catch up from my notebooks.....

Neil had to do a first aid course at Royal Quays today so as he cannot drive at the moment I booked the day off work and went off birding in a few of my old haunts whilst he was busy. First stop was the Low Lights Car Park where I had a short walk along the promenade. A steady flow of Kittiwake heading out to sea from the inland colony at Newcastle was nice to see...as was a few Linnet flying overhead.
Then it was on to Northumberland Park in North Shields and what a change in it's appearance!!! I heard it had been tidied up but from the last time I was in there over eight years or so ago (vague estimate as I don't have my diaries to hand) it looks amazing! And so much bigger! I spent around an hour or so there before it started to get busy with loads of dog walkers and parents with screaming kiddies. Nothing new seen but nice to visit.

Then I headed up to Whitley Bay Cemetery where I spent a pleasant hour in the warm sunshine putting some daffodils on my mother-in-law Stella's grave and then walking around in the general direction I knew Neil's grandparents were buried. That took some finding! But I got there eventually and took a few photos for the dates record for my geneology project.

St Mary's Lighthouse was absolutely heaving with visitors and no signs of masks nor keeping socially distanced....so I made sure I did! On the Wetlands were a few birds in the shape of a pair of nesting Mute Swan, some Canada Geese, Moorhen, Gadwall, Mallard, Black-headed Gull and Linnet flying overhead.

After picking Neil up at 3pm we headed back home via the coastal route and stopped off at the Queen Elizabeth II Park. Here I saw my first Sand Martin of the year.

Finally, pulling into the layby along the River Coquet between Amble and Warkworth I had a few Lapwing and Wigeon.

In all I had a very enjoyable day and I'll definitely get back onto Tyneside later in the spring to see if I can catch up on a few other old haunts like the Swallow Pond, Gosforth Park and Jesmond Dene and, with a bit of luck, run into a few of those Ring-necked Parakeets I've always wanted to see! 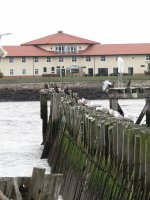 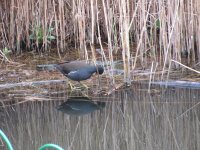 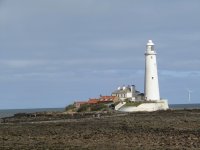 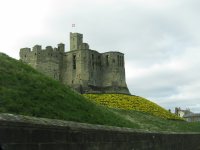