I have visited the same area of Almeria several times a year for the last 16 years and other than an occasional young Golden Eagle passing through on dispersal I am not aware of a pair nesting in the area during that time. On the last day of my visit I saw this pair of what appear sub adult eagles circling over a rock crag repeatedly for an hour. The larger female (I assumed) returned to the same ledge several times and and was hidden behind a bush. The male landed above on the ridge of the crag. On one of the return visits the female appeared to be carrying nesting material as seen in the photo.

My question is can anyone age the pair and would they be a viable breeding pair at that age or are they a young pair more likely to be practicing what comes natural.
Could they have young at this time and if their age is sufficiently mature.

The site is on a remote ridge above a very small village in a quiet part of Spain. I do not want to disclose the exact location on an open forum as If they are nesting or likely to nest next year I want them to have every chance without disturbance. However, if there are and official raptor groups or ornithological organisations in Spain that should be informed I am happy to disclose it. I will hopefully be back out in October if not sooner. Any advice will be welcome. 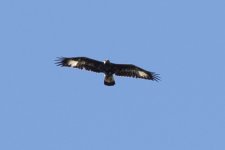 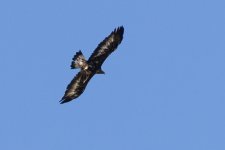 Those are both immature birds based on the extent of white in the tail and underwing. The underwing coverts look dark and the tail feathers look rounded so I'd suggest it is in its second plumage so presumably fledged in 2019.
P

Thanks for your reply, it sort of confirms what I thought with the extent of white on wings and tail.
Nice to see anyway and hopefully they may return in the future to breed
E

Parryman1 said:
Thanks for your reply, it sort of confirms what I thought with the extent of white on wings and tail.
Nice to see anyway and hopefully they may return in the future to breed
Click to expand...

I agree that these are 3cy birds. The 2008 census of Golden Eagles in Spain found 34 pairs in Almería and there are probably more now. Always nice to see.

From birds of the world

Most Golden Eagles do not acquire a nesting territory until they are at least four years old.
Click to expand...

The way i read this is that a few may acquire earlier.
Niels
P

Thanks for your comments and assistance