Bird species, which breed on the ground in grasslands, experience big challenges in times of intensive agricultural use of land, falling groundwater levels and general land usage. How can we protect the Common Snipe, Northern Lapwing, Eurasian Curlew and Montagu’s Harrier from serious declines? 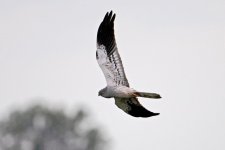 ​
High up in a tree, dangerous situations are rather clear to see, and many are avoided. No doubt, even there, birds face natural nest predators, but against threats from people, those birds breeding on trees do not have so much to do as long as there are enough trees. On the ground, in the meadows, a clutch of eggs is at the mercy of foxes, ravens, trampling by farm animals and endangered by farm vehicles. A much bigger problem for grassland birds is the rarity, and reducing size of their breeding habitats. The perfect habitat for the Eurasian Curlew, the Common Snipe or the Northern Lapwing are natural grasslands with a high ground-water level, relatively few trees and extensive (not intensive) agriculture with late mowing of grass.

This short-distance migrant with the long bill is more than half a meter tall, though the female is actually taller and has a longer bill than the male, and lives in the boreal zone from West Europe to Siberia, mainly in Northern and Central Europe. During winter the birds migrate to the Mediterranean region and West Africa. The original breeding area of the Eurasian Curlew was on moorlands, which have become more and more rare. Consequently, the species shifted to extensively used wetlands in lowlands. The positive message is that the former moor-breeding bird reacts well to the protective measures and the created breeding habitats regarding the development of its population. Nevertheless, there are too few measures like this so far. The «Compendium of German Breeding Species» shows a negative trend of the population, but it indicates a stabilisation on a low level. 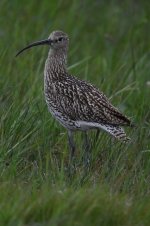 In South Germany the former population of 160 Eurasian Curlew pairs, which mainly breed around Offenburg on the Upper Rhine, has been reduced to 40 pairs within the last 30 years. Several experts protect the tallest wading bird of Europe here with cumbersome measures like huge confined areas in collaboration with the local farmers. The electric fences around the breeding areas do not please everyone, but they have greatly improved the breeding success. For the farmers the late mowing means some losses, but for the Eurasian Curlew it is about survival, as the fledglings need a lot of insects. Many other wild flora and fauna, endangered by intensive agriculture, benefit from protected Great Bustard areas.

Northern Lapwings have both a striking appearance (males and females being more or less alike), with a prominent crest on their head, and a distictive voice, their loud “Kie-witt” calls being familiar on their breeding grounds. Both sexes participate in raising their chicks which leave their nest very early to look for insects on stretches of water. Without wetland features, or inundated areas, it is a challenge for the Northern Lapwing to find enough food in the uniform grassland . In addition, their clutch of eggs is at risk from farm vehicles and machinery. Usually, the Northern Lapwing remains faithful to their breeding ground, but if the brood was not successful, they move to other ground. As an acknowledged herald of spring in Northern Germany and the Netherlands, people traditionally stole eggs from the clutch of the Northern Lapwing. Today organizations at the North Sea like “Schutzstation Wattenmeer” fence the breeding areas at large-scale to protect the clutch from tourism and too many people.

The range of the Northern Lapwing embraces a huge area, from the moderate Mediterranean zone of West Europe to the Eastern part of Russia. The short- distance migrant spends mild winters even in large numbers in the North. Its rapidly declining population since the 1970s brought the Northern Lapwing on the red list of IUCN and unites nature conservationists internationally in a common effort to protect the population and their habitats.

The Common Snipe does not show a strong sexual dimorphism if we just use our eyes. Using our ears, we recognize the male by their loud courtship sounds, produced be vibrating tail-feathers, which resemble a bleating sound. The louder the male, the more attractive he is to the female. This sound has led to the species being called ”sky goat” in Germany. It is easier to locate a Common Snipe male from its bleating sound during its display flight, than it is to find it by sight on the ground, as its plumage is a superb camouflage. The population of Snipe has halved in Germany within the last 20 years as their habitats like moors and wetlands diminished. In their population range from Eurasia to Kamchatka researchers estimate two million species. ~This reduction in population has been especially severe Central Europe. 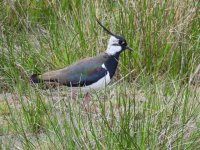 The Montagu’s Harrier, which belongs to the family of hawks and is really impressive with its length of 43-47 cm and a wingspan of 120 cm, also struggles as ground breeder. The species needs broad river valleys, and a range of wet to dry habitats like fens or steppes and heaths.

Globally the species is not endangered, but in Europe the population is declining in many regions. It favours fields with vegetation neither too high nor too dense and here lays a clutch of three to five eggs, in a distribution stretching from the South of Sweden and Great Britain to the North of Africa. Under optimum conditions the Montagu’s Harrier breeds in a sort of colony. There is a positive sign given by the last «Compendium of German Breeding Birds” that prove the protection measures for the species to be effective. The bird populations develop well and is recovering in many regions.

Protecting grassland birds needs conservation organisations to fundamentally re-think how this is organised. It needs extensively used (not intensively farmed), large and undisturbed areas. We can all avoid disturbance by being unobtrusive, and by observing birds and other fauna as well as the diverse flora, from the edge of those areas, using our optics. Initial trials of the targeted species protection measures have been successful enough to demonstrate that we can enjoy the birds in future through careful conservation.
Click to expand...

I so agree with you Gary
G

Garry oak,rare in Canada,only oak on pacific coast, is the old english name. in US it is Oregon white oak.
the reason i joined forum is to connect with urban bird conservation ists!

Staff member
Supporter
Garry you are right of course and we are fortunate in having a suburban garden that we have made wild enough to have more than 12 species visit most days. Nevertheless this thread is about grassland bird conservation and the OP makes a strong case.

In case of tropical grasslands as found in India, the dangers are also multiple. The foremost is physical infrastructure - highways, canals, powerlines - which pose a direct physical threat to the grassland. Expanding agriculture too in some cases act as a detriment to grassland ecosystems - in most cases.
However, In case of a species such as the Lesser Florican it breeds in the monsoon in fields full of lentil crop. It is the goodwill of the farmer that is the most important determinant of survival of this species.

The Great Indian Bustard is a far more alarming case in point. This big Bustard, once fairly common all over arid spaces in the Indian subcontinent, is now restricted to 120 odd birds in the wild - all in Jaisalmer district of Rajasthan. The drastic fall in population can be attributed to habitat loss and hunting. Hunting is still an issue when the birds fly across the international border to Pakistan.
Interestingly, a recent captive breeding project started for Great Indian Bustard Conservation has led to many ‘firsts’. The impression that eggs collectrd from the wild do not hatch was dispelled. Further the popularly held belief that the GIB lays one egg per season also came to a naught- at least two wild females layed multiple eggs when the first egg was picked up early.
Today there are 14 chicks in the captive breeding facility of various ages. The challenges ahead include getting this founder population to interbreed and lay and then introduce the next generation to the wild without too much human imprinting.
Once again, habitats, secure habitats will be the biggest stumbling block.

Over the years the societal appreciation for migratory birds has gone up. Science has contributed to resolving some issues such as diclofenac poisoning in vultures and eagles, at least in part.
Never easy is it? If conservation is challenging in affluent economies such as those in the EU (orin UK), it is all the more complex in the tropics.