Hello,
I took this picture during my recent trip to south east Arizona. Is this Gray flycatcher? 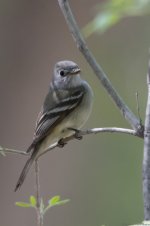 Staff member
Supporter
Looks like one from the photos I’ve seen. But I would wait for further verification. It is a very nice photo.

Why not Hammond's? Maybe it's just me but projection seems to long for Gray.
T

connorco said:
Why not Hammond's? Maybe it's just me but projection seems to long for Gray.
Click to expand...

I agree with this. Bill seems largely dark to me too

I agree with hammond's because of the beak.
A

Any more photos? This looks rather in between Hammond's and Dusky for me. The primary projection is right in that middle ground between the two but the tail seems a bit long for Hammond's to my eye. At first glance there appears to be the "big gap" between the 4th and 5th primary which is a good trait for Hammond's. However, when zoomed in it appears as if there is a another primary tip in there that is not as obvious and would make the wing formula better for Dusky. More photos would be very helpful.
K

K
Need help with Vireo id's at Phoenix and Portal