First post! New to birding and finding gull ID very challenging. It seems like every gull picture I enter into Merlin comes back as an Iceland gull, which isn't very helpful.

The bird on the shore was seen in Niagara-on-the-Lake on Dec. 27th. I'm wondering if it could be a juvenile herring gull, but the colour seemed a bit light compared to some of the photos I found online.

The other gulls were seen on the Welland Canal yesterday. Seemed fairly large, pink legs, grey backs, black wing tips. Also thinking these are herring gulls. Is that correct? (except for the one in flight, which doesn't seem to have dark wing tips... could that be an Iceland gull?)

Does anyone have suggestions re: resources for learning to identify gulls? I'm not sure where to start when there seems to be so much variability sometimes even within the same species. 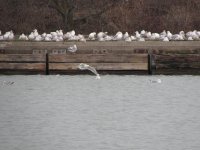 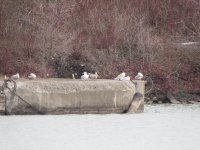 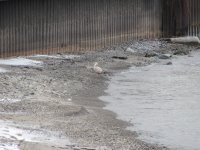 I'd agree with American Herring Gulls, an immature on pic 3, and (mostly) adults in pics 1-2.

Welcome Eskader. I agree with Nutcracker

I agree with Herring Gull!

Hi there and a warm welcome to you from those of us on staff here at BirdForum
We're glad you found us and thanks for taking a moment to say hello. Please join in wherever you like
E

Thanks a lot! Happy New Year!