Hi! Here is a few gulls I saw on San Cristobal (Galapagos) in January. They were in one group. They should be Laughing Gull or Franklin's Gull or both of them. Do I guess, that 1 and 2 are Franklin's and 3 and 4 are Laughing?
Thank you! 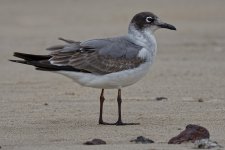 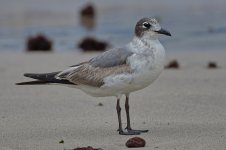 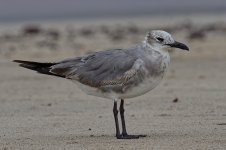 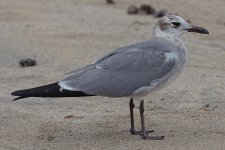 Thank you for the confirmation!!!
H

Are there any flight images of the first two birds? While I agree that the head patterns do seem more like that of a non-breeding Franklin's Gull, there are some features that give me cause for concern, including the lack of pale fringes to the innermost visible primaries at least, the bill length not seeming short enough for Franklin's (the foreshortened bill in the second image especially looks as though it would be long), the dirty smudgy grey tones on the nape and, to a lesser extent, the flanks on both birds, the worn juvenile coverts on the second bird, and I wonder if they may just be 1st cycle Laughing Gulls attaining a partial hood?
S

I'm fine with Franklin's Gull for those first two, Harry.
Broad white edges to lower tertials are fairly typical, as is the complete lack of any moulted wing coverts on this date.
Note, in the first bird, also the bit of orange colour admixed on the legs.
Some 1c Franklin's even show completely orange legs!