Has anyone else experienced eastern gray squirrels that are shy, timid, or otherwise not interested in bird food? (2 Viewers)

Hello, folks!
This isn't really a thread that I needed to post, but I guess I just kind of felt like posting it.
Where we live, we have not experienced eastern gray squirrels being pesky. In fact, I'm starting to miss them after we moved out of a location with loads of them!
We still have them here, but for some reason, it is quite uncommon to see them. I mean, they are not rare, but they are not an everyday sight either.
Given, we do not have many nut-bearing trees on our small lot. We are also still in the process of making our yard more wildlife-friendly.
I decided to put out a homemade squirrel feeder made from a milk jug with the hopes of attracting more squirrels to our yard.
Back in Connecticut, there was no way to keep a gray squirrel off of a feeder with sunflower seeds!

However, I've noticed something unusual.
The squirrel feeder rather quickly attracted black-capped chickadees, white-breasted nuthatches, blue jays, and lots of eastern chipmunks.
I was pleased to see so many chipmunks in a yard with so few nut-bearing trees.
The chipmunks were chasing each other around over the sunflower seeds. This was what I expected to see, being acquainted with their behavior.
It took a while before the first squirrel showed up. I was so excited to see one finally find the feeder that I missed an opportunity to photograph a nearby eastern phoebe.
The squirrel took some time investigating the feeder. It sniffed the cap, ate maybe one seed, then left.
I was surprised to see a gray squirrel acting so skittish and uninterested in sunflower seeds. That would certainly explain why we never had a problem with them.

And no, they were not safflower seeds, thistle seeds, or hot pepper-flavored bird treats. They were plain black oil sunflower seeds!
It had occurred to me that maybe this individual squirrel had never before seen or tasted sunflower seeds.
Or maybe it was just more interested in finding acorns. It is autumn, after all.

This is certainly not how our local red squirrel behaves. It will often be one of the first creatures to show up at any bird feeder, whether it is pure suet, bird food, or food intended for squirrels. 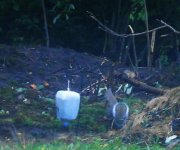 Here's the squirrel near the feeder. Notice it's not eating from it. The chipmunk above its head ate from the feeder several times.

I'm not going to ask for advice on how to win this squirrel over. If it wants to just forage for its own natural food, then that's its own decision.
Besides, I doubt that it will take very long for our resident gray squirrels to start raiding our feeders!
Still, I'm curious as to whether or not anyone else has experienced anything like this when it comes to feeding squirrels.
I always thought that they were bold and aggressive feeder bullies, but apparently birdseed is not always their greatest interest.

If anyone has a problem with gray squirrels at their bird feeders, I would gladly trade squirrels with you!
(Just kidding.)
E

Supporter
I'd expect wild squirrels to be pretty wary, they probably have a genetic memory of Brunswick stew, so they will be careful about when and where to settle down for chow.
That said, they sure learn fast, here in NYC Central Park they practically check your pockets for sunflower seeds.

One possibility is that the seeds were treated, as they often are, with a fungicide, which may alter the taste. Against that is their acceptance by the chipmunks.
Maybe you just have especially fine acorns....

A
Questions about the abundance and behavior of weasels. Are there suburban weasels?

Sep 16, 2022
Avon Avians
A
A
Landscaping ideas for birds and other wildlife? Which plants are best?

S
What Bird Feeder to get next? Also--what other kinds of food?